BEREA, Ohio -- The Cleveland Browns hoped they found a leader for a franchise in desperate need of one when they made a trade with the Buffalo Bills for veteran quarterback Tyrod Taylor this offseason. 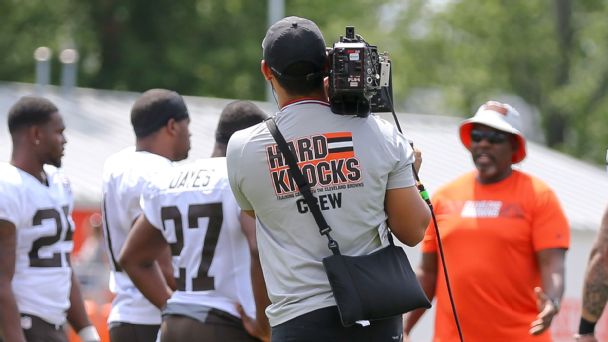 • Hue to Dez: 'Need guys like you'
• Mayfield and QB RV take center stage
• What the Browns said to Antonio Callaway
• Even Uber driver supporting Cajuste
• Top moments from 12 seasons of 'Knocks'

When asked what impressed him about training camp, Browns coach Hue Jackson singled out his new starting quarterback.

"I would be remiss if I did not say Tyrod Taylor and what he has done on this football team since the day that he walked in the building at practice, his leadership, how he has conducted himself here and trying to do everything he can to get this organization winning," Jackson said.

The two-time Pro Bowler showed right away the kind of leader he was going to be. He coordinated a trip to California for some offensive players to meet following the June veteran minicamp so they could bond and work on team chemistry ahead of training camp.

"I know the offseason, especially before training camp, is a time you can get around your family before you get back to the grind," Taylor said. "But I thought it was necessary for us to get together especially with a new team and a new scheme."

Gathering the offense together before training camp was something Taylor had learned from his time in Buffalo. Another thing Taylor brought was the ability to handle changes to the wide receiver group, something the Browns have had to deal with as the season approaches.

Not only did the Browns lose Josh Gordon before training camp began (he has since returned after receiving help for his mental health), but they also traded Corey Coleman to Buffalo in the middle of training camp. But Taylor knew what to do because the Bills last season traded Sammy Watkins during training camp and also acquired Jordan Matthews on the same day.

"It is not something that you want to go through, but at the same time, it is the nature of the business," Taylor said. "You understand that things happen. That is why we always say next guy up or next man up mentality and I think guys have stepped up to the opportunity, went out and competed and are still doing it."

Taylor has shown leadership just by the way he conducts himself every day, and that's a welcome sight for a franchise that has had 28 different starting quarterbacks since 1999 and traded all three of its QBs who played last season in DeShone Kizer, Cody Kessler and Kevin Hogan.

"Tyrod sets the bar for consistency, there is no doubt about it," Browns quarterback coach Ken Zampese said. "There is no man more consistent than him when he gets here. The bar is set very high. It’s fantastic."

The Browns drafted quarterback Baker Mayfield No. 1 overall, but Jackson has never wavered in his plan to start Taylor. Mayfield has impressed at times during the preseason, and as the top pick, his time will come at some point. But Taylor said he's not looking over his shoulder.

"I have always focused on myself," Taylor said. "Like I said from day one, I am in competition with myself and how I can make myself better each and every day. I want to continue to keep having that mindset and pushing myself to be the best I can be."

Taylor’s approach has not been lost on Mayfield, who is slated to be Taylor's backup.

"The work ethic and everything that he brings to the table every day, it is the same every day," Mayfield said. "You hear [offensive coordinator] Coach [Todd] Haley talking about not being a yo-yo guy and you want to be consistent. Ty really is the example of that. He is the same guy every day. You know exactly what you are going to get out of him. That is important for our guys to see that so that they see the standard. They see the expectations. He lives up to it every day."

Taylor also leads with his toughness and competitive spirit. After dislocating the pinkie on his left (non-throwing) hand in the third preseason game against the Philadelphia Eagles, Taylor had the pinkie put back into place and missed just two offensive series. Once Jackson knew Taylor was going to be fine to play, he had no reservations about putting him back in the game.

"Our offensive football team at that time needed to play together, they needed his leadership," Jackson said. "He needed to be out there playing with them. I think it is important for them to develop that chemistry, so I felt comfortable that when we put him back out there, things were OK."

Seeing the starting quarterback re-enter the game despite an injury, especially in a preseason game, showed the other players in the huddle what they were getting in Taylor.

"That’s just who he is, his character," Browns rookie guard Austin Corbett said. "You get a guy who is fighting like that, especially at the quarterback position, that’s going to drive a lot of things and get people moving."

Taylor also didn’t miss any practice time with the injury, making sure he was back on the field Saturday for the Browns’ first practice since the win over the Eagles, even if he did so with his left hand wrapped. He also is still dealing with a bruised hand suffered on the play that dislocated his pinkie.

Winning is the ultimate goal for the Browns, a team on a 17-game losing streak and with only one trip to the playoffs since returning to the NFL in 1999. The 15-year drought is now the longest in the NFL after Taylor led the Bills to the playoffs last season for the first time since 1999.

The reaction from the fans of Buffalo was something Taylor remembers and one he wants to see in his new city.

"For a team that has not been to the playoffs for 17 years to come home after we beat Miami on New Year’s and to see the fans standing out in snow as the plane approached Buffalo was definitely special to see," Taylor said. "You definitely see the excitement, and I look forward to creating that here."