DALLAS -- Dirk Nowitzki revolutionized the power forward position in the NBA, and that’s one of the primary reasons he might be forced to become a full-time center during the twilight of his career.

Nowitzki was considered an oddity in the old days because he launched from long range. Nearly two decades after he broke into the NBA, power forward has practically become a perimeter position. A lack of a reliable 3-point shot is now considered a glaring weakness for a power forward, and the small-ball trend in the league has put more of a premium on quickness and playmaking at that position.

In other words, it’s practically impossible for the 38-year-old version of Dirk to play anything remotely close to passable defense against most starting power forwards in the league. Hence the Dallas Mavericks' horrendous results in limited time (minus-62 in 53 minutes) with Nowitzki playing next to Andrew Bogut.

That created quite a dilemma for coach Rick Carlisle. The solution, at least for now: Move Bogut to the bench and make Nowitzki a full-time center.

“I don’t like this from the standpoint that Bogut is a starting center,” Carlisle said after the Mavs’ 113-105 win Tuesday night over the Washington Wizards. “Bogut is a top-six or seven center in the game, and he shouldn’t be coming off the bench. ... He deserves to start. They both do, but we haven’t been able to make it work real well, so tonight, this is where we were. Come [Thursday], who knows? Who knows what will come out of the microwave?”

It’s a bit of a stretch to suggest that the switch in the starting lineup led to the Mavs’ victory. After all, Dallas’ starting lineup was outscored by 12 points in its 12 minutes together on the floor.

And it’s not like this starting lineup has had a lot of success together since Nowitzki returned from an extended absence due to a strained right Achilles tendon. That five has been outscored by 43 points in 38 minutes over five games.

But there are good reasons for the Mavs to continue with the experiment of Nowitzki as a full-time center. At the top of that list: The fact that Harrison Barnes, Nowitzki’s potential heir as the face of the franchise, thrives at power forward.

“That should be a good scoring lineup,” said Nowitzki, who had 11 points and nine rebounds in 24 minutes against the Wizards. “That’s a lot of shooters out there, a lot of playmakers. We’re trying to give HB as much room out there as we can.”

Nowitzki is still working his way into shape and trying to gain some rhythm, but his mere presence alters opponents’ defensive schemes, especially as a floor-spacing center. Barnes benefits, much like Chandler Parsons did when the Mavs tinkered with playing Nowitzki at center last season. According to nbawowy.com, Barnes has averaged 1.26 points per possession while playing with Nowitzki and no traditional center, a spectacularly efficient number.

The question is whether the Mavs can make up for Nowitzki’s deficiencies as a rim protector with him playing center. That was certainly a problem when John Wall went into attack mode in the final 2:29 of the second quarter, scoring 13 points in a 20-3 Washington run to close the half.

“You just want to make sure there’s the least amount of penetration as possible, but there’s always going to be some,” Nowitzki said. “That’s where I’ve got to use my smarts and use my length and not give too much ground and just be smart about it.”

Barnes, who put up 26 points, seven rebounds and five assists in one of his most well-rounded performances, couldn’t help making a punchline out of Nowitzki’s rim protection. 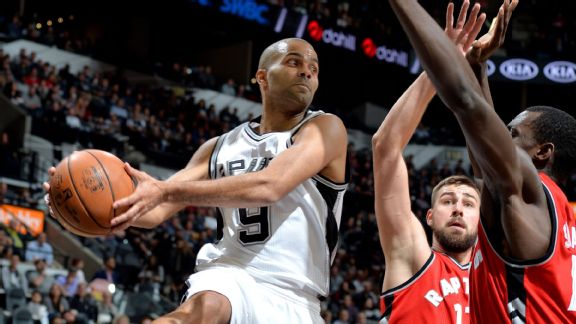 Even if the Raptors were road weary, the Spurs' passing game still impressed.

“He says he’s got 1,000 blocks in his career. I don’t know if I believe that,” Barnes joked. On a serious note, he added: “We know we’ve just got to be scrappy when he’s in there. He’s not shy about his lateral quickness. We all make up for that. Then, offensively, we just punish teams.”

Nowitzki’s defensive shortcomings, whether he’s at center or power forward, force Carlisle to be creative. That’s why the Mavs play more zone than most teams, occasionally do unconventional things with switches or “bastardize matchups,” as Carlisle puts it.

The Wizards did the Mavs a favor early in the game by going to Marcin Gortat on the block. Nowitzki can hold his own as a post defender, especially against guys who aren’t used to getting those touches. His problems really come when teams put him in pick-and-rolls, as the Houston Rockets showed during their recent Dallas visit.

The Mavs are trying to figure out if it’s their best path to making a push for the West’s last playoff spot, which they’re only 4 1/2 games out of despite their 11-24 record.

It’s a significant adjustment, particularly for Bogut. He volunteered to come off the bench, but only because he preferred that to starting a game just to appease his ego and being quickly pulled.

“You’re on an [11]-24 team and you’re coming off the bench; it’s not the most exciting thing in the world,” Bogut said. “It’s not something you’re going to go home about and talk with your family and get a cake over. It’s just something you’ve got to deal with in this league.”

It’s a league that will probably force Nowitzki to play primarily, if not solely, center in his old age. In a way, it’s a tribute to the player he was in his prime.