Darnay Holmes' phone contacts aren't like most NFL rookies' contacts. If the New York Giants' fourth-round pick needs advice, the cornerback can begin with his father, Darick, a former running back for the Buffalo Bills who trains and mentors kids in California, or his older brother, Darick Jr., who was a wide receiver at the University of Arizona.

If Holmes goes outside the family, he can reach out to Rod Woodson, Aeneas Williams or Deion Sanders. That was the Pro Football Hall of Fame trio Holmes listed as his mentors following the 2020 NFL draft. 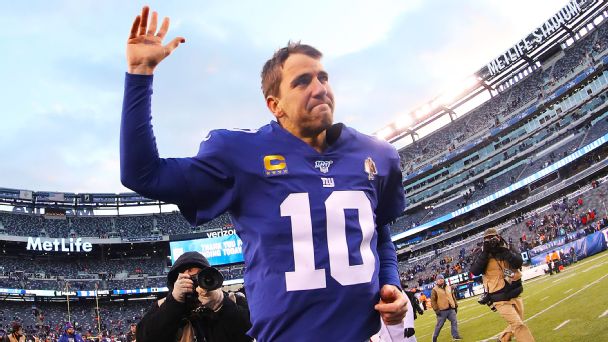 It's not exactly the normal list of contacts for a 21-year-old rookie, but these are some of his options and he's not too intimidated to use them.

Holmes was the DB MVP at Sanders' Prime21 camp in 2015. His relationship with Williams stretches back to Nike's The Opening in 2016, where Williams served as his coach there and then again at the Senior Bowl earlier this year. Woodson knows Holmes through UCLA defensive back Quentin Lake, the son of his former Pittsburgh Steelers teammate, Carnell Lake.

The HOF trio's inside information on Holmes only solidifies the belief that the Giants extracted serious value with the No. 110 overall pick.

"He might be the sleeper [defensive back] in the draft," Woodson said recently in a telephone interview with ESPN. "I know he was taken in the fourth round. But I like his mindset. No coach can measure one's heart and one's mind until you start playing. I think when I've seen him playing and talked to Carnell and his son, just the way he moves and how fluid he is and has that recall during the games when people are doing stuff to him that makes you kind of excited to watch a player like that."

Williams was impressed when he coached Holmes coming out of high school. Holmes' willingness to seek mentorship and his natural leadership were rare traits, and they have remained in touch ever since.

Holmes planned on traveling to Missouri this spring to stay with Williams in an effort to solidify his game as well as his spirituality. Williams is a pastor at The Spirit Church he started with his wife. When the coronavirus pandemic put the kibosh on those plans, Holmes sent tapes of his workouts instead.

It was the same stellar skills Williams had seen from his mentee before -- ease of movement, ability to get in and out of breaks, fluid hips and an impressive work ethic. And it's why Williams, a third-round pick out of Southern University in 1991, was certain Holmes would be a significant NFL player after coaching him again at the Senior Bowl (Williams was invited to coach through the NFL Legends Committee).

"I was thinking in the back of my mind, a team is going to get a steal," Williams told ESPN this week in a telephone interview. "I didn't know when or where he was going to go, but I know he has a lot more value than where he was drafted. I can tell you that."

Sanders, meanwhile, raved about Holmes throughout his combine workout in March. At one point, he noted on air that Holmes was the best he had seen in the speed-turn drill this year.

A couple of things probably prevented Holmes from being drafted higher, and those included his size (5-foot-10, 192 pounds) and a down season at UCLA in which he contributed to the Bruins' struggles to pressure the quarterback. There is still a strong belief the Giants are getting a talented, mature player with a rare appetite for success.

Woodson called Holmes an "old soul" and Williams noted Holmes' maturity as a high school player. Holmes' drive is a product of his advanced maturity, perhaps buoyed by his experience dealing with his father's near-death experience after being shot during what Darick recently told the New York Post was a drug deal gone bad a decade ago.

Holmes graduated from UCLA in 2½ years, which says something about his determination and focus, traits that should help him in an unprecedented year that includes a virtual NFL offseason requiring immense self-discipline.

"Darnay has the mental capacity. He has the willingness to dedicate himself to such," Woodson said.

This wasn't an accident. It was Holmes' plan, even if it meant being in school year-round without much of a break.

"Definitely the school curriculum allowed me to implement a strict routine, a routine that allowed me not to sway away into different distractions," Holmes said. "So, by me having this vivid vision, my energy was aligning to it right away. That's definitely something that I implemented right when I got to UCLA. It was, 'I'm going to graduate in three years and then from there I'm going to figure out what I want to do.' Right away I was a student, then after I graduated, it was like OK, how can I pursue my athlete endeavor, and I'm here now being a New York Giant. I'm very excited."

The Giants' plan appears to be to use Holmes primarily in the slot as their nickel cornerback. After playing mostly outside at UCLA, he impressed the Giants with his speed and quickness playing out of the slot at the Senior Bowl. That is where he "jumped out at us," according to new Giants coach Joe Judge. Giants general manager Dave Gettleman said after the draft that Holmes will come in and immediately compete for the nickel spot.

The Giants' defensive backs room will provide support, even if it is a young group without an overflow of proven veterans. Newly signed James Bradberry, 26, is the most accomplished cornerback and he doesn't have a Pro Bowl on his résumé.

But Holmes has his established mentors.

"It's only an advantage if you take advantage of it, which I know he will," Woodson said. "It seemed liked we were at the combine for 20 days. In the time we were there, I talked to him every day.

"When a kid comes up to you and asks, 'I want to know what you think about this for training.' And then he asked another question, I think it was about mindset. And then about practice habits. And he kept coming back. I'm like, 'This kid is hungry.' That is a great thing."

Especially when that hungry kid has a stable of Hall of Famers at his fingertips.