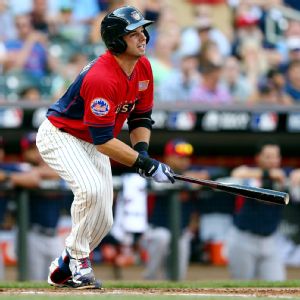 Kevin Plawecki went 0-for-2 but drove in the opening run in the Futures Game.

NEW YORK -- Noah Syndergaard's performance was worth the wait.

The top prospect, who has struggled this season with Las Vegas, topped out at 97 mph with his fastball and produced a 13-pitch save in the Futures Game on Sunday in Minneapolis. He allowed a two-out single to Rockies prospect Rosell Herrera but no other damage as the U.S. squad beat the World team, 3-2, at Target Field.

Fellow Mets farmhand Kevin Plawecki started at catcher and finished 0-for-2 with an RBI before being replaced behind the plate by Justin O'Conner from the Rays organization. Plawecki's third-inning fielder's choice plated the game's opening run.

Meanwhile, earning the save is becoming customary for Mets farmhands. Matt Harvey earned the save for the Mike Piazza-managed U.S. squad back in the 2011 Futures Game in Phoenix.