THOUSAND OAKS, Calif. -- The Los Angeles Rams' window to win a Lombardi Trophy opened in 2018 and they capitalized with a trip to Super Bowl LIII.

Considering they went all-in to build a star-studded roster for that effort, some may have thought their Super Bowl window would be short. However, coming off a 10-6 season and looking ahead to 2021, the Rams continue to be in prime position for a division title and playoff, if not Super Bowl, run.

Preparing for their sixth season in L.A., and what they hope will be their first in front of fans at SoFi Stadium, the Rams front office and general manager Les Snead are proving the flashy, daring moves they made over the last five years are hallmarks of their decision making.

"We have a model that's rationally successful, but it would be bad business if we didn't look at the model every year and try to apply lessons to tweak it to ... advance to a game like this past Sunday in future years," Snead said a week after the season ended with a divisional playoff loss to the Green Bay Packers.

"And not just in 2021, but to be one of those teams that where, you know, what if we're in the final four and we're playing for a conference championship it's expected, not just a surprise or kind of a Cinderella-type deal."

For better or worse, conventional thinking -- including building through the draft -- isn't the Rams' style. Being aggressive to get players they want is. And they've employed several methods to that end.

Historic moves up the draft board? Check. 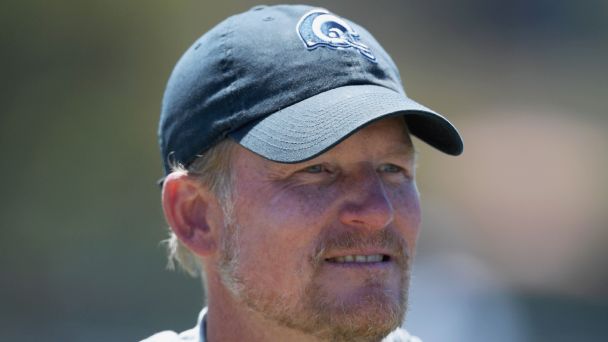 Some of the bold maneuvers that general manager Les Snead and the Los Angeles Rams have made since moving to Southern California in 2016.

March 14, 2018: The Rams trade their 2018 second- and fourth-round picks to the Kansas City Chiefs for cornerback Marcus Peters and a 2018 sixth-round pick.

Oct. 15, 2019: Rams send their 2020 and 2021 first-round picks, along with a 2021 fourth-rounder, to the Jacksonville Jaguars for cornerback Jalen Ramsey and trade Peters to the Baltimore Ravens for a 2020 fifth-rounder and linebacker Kenny Young.

* - trade not official until the start of the new league year on March 17.

The Rams traded six picks, including two first-round selections, to the Tennessee Titans to move up from No. 15 to No. 1 to select quarterback Jared Goff in 2016.

Signing multiple players to record-breaking paydays, only to jettison a few not long after? Check.

The Rams parted with Gurley and Goff before both players reached the extension portion of their contracts, though both secured significant paychecks via bonuses and guarantees.

In 2017, the Rams sent their 23rd overall pick to the New England Patriots in exchange for wide receiver Brandin Cooks. In 2019, they packaged their 2020 and 2021 first-round picks to the Jacksonville Jaguars to acquire Ramsey and last month, they traded their 2022 and 2023 first-round picks -- along with Goff -- to the Detroit Lions in exchange for quarterback Matthew Stafford.

The Goff-Stafford trade will become official at the start of the new league year March 17.

None of the risks the Rams have taken, in terms of big cash payouts or mortgaging future draft talent, have resulted in a Super Bowl win, though they came within reach in a 13-3 loss to the Patriots in Super Bowl LIII.

When it comes to the Rams' unconventional roster building and earlier-than-necessary paydays, some moves have turned out regrettable -- they ended up taking on $33.55 million in dead money when they cut Gurley last year and traded Cooks -- who was in the midst of a five-year, $81 million extension -- to the Houston Texans (though they did get a second- and fourth-round pick in return for Cooks).

But since the Rams hired coach Sean McVay in 2017, another bold move given he was the youngest head coach in modern NFL history at age 30, they have gone 43-21, putting together four straight winning seasons with two division titles, three playoff appearances and an NFC championship.

Though a flurry of first-round draft picks and standout players -- including cornerbacks Marcus Peters and Aqib Talib and defensive tackle Ndamukong Suh -- have come and gone via trades and free agency, the Rams remain in contention.

They return three-time NFL Defensive Player of the Year Donald and All-Pro cornerback Ramsey on a defense that ranked No. 1 in the league last season. And the offense returns receivers Robert Woods and Cooper Kupp, tight end Tyler Higbee and a promising young running back in Cam Akers.

The Rams already made the biggest possible offseason move in sending Goff to Detroit for Stafford, who had three playoff appearances in 12 seasons with the Lions but is expected to capitalize on a partnership with McVay and the Rams' existing playmakers.

The Rams will incur a $22.2 million dead-money charge for trading Goff, but that will amount to a $12.75 million cap savings from what his salary cap charge ($34.95 million) would have been had he stayed. Stafford will cost $20 million in salary-cap charges.

• Why Colts still need to draft a WR
• Lance, Jones, Fields? Who is best QB for 49ers
• Is Kerry Hyder Jr. Seahawks' new Michael Bennett?
• Why Eagles may have another trade up their sleeve
• Dolphins' ideal two-round draft: Playmakers, pass-rushers, center

However, it can't be overlooked that Goff ultimately also cost the Rams four first-round draft picks -- two to move up to draft him and two to send him to Detroit.

"They have zero margin for error, it's reckless and irresponsible to go eight years without a first-round pick," ESPN front office insider Mike Tannenbaum said in the immediate aftermath of the Goff-Stafford trade. "I think this is a really risky move."

Unless the Rams trade up in future years, they will not make a first-round pick until 2024 and haven't made one since Goff in 2016.

With the salary cap dropping from $198.2 million in 2020 to an estimated $180 million due to financial fallout from the coronavirus pandemic, it's uncertain what further big splashes the Rams can make this offseason and whether they will be able to retain any of their unrestricted free agents, including outside linebacker Leonard Floyd, safety John Johnson III and cornerback Troy Hill.

"It's going to be an interesting offseason that will take maneuvering, adjustments," Snead said, adding later that, "Anything can be done in a cap-based system."

The Rams have proven that over the last four seasons. Time will tell if it will be possible again in 2021.