PITTSBURGH -- After rooming with T.J. Watt for two years at Wisconsin, Alec James realized the Watt football blueprint applies to all hours and all menus.

"His idea of a cheat-day meal was Chipotle," said James, a former Badgers defensive end who will be in Arizona Cardinals training camp. "He's always disciplined, always working when no one's working."

The Pittsburgh Steelers report to training camp July 25, but Watt already is approaching sizable sophomore expectations as if camp started weeks ago.

Watt has spent the past month back home in Pewaukee, Wisconsin, for a rigorous schedule with trainer Brad Arnett at NX Level, pounding two gallons of water a day and helping the family collect wood for post-movie night fires in the backyard.

Watching his brother J.J. win three Defensive Player of the Year awards with the Houston Texans and grace multiple Sports Illustrated covers has inspired Watt. But he's not seeking such fame right now.

"I've got a boring lifestyle. I'm not about any of that [other] stuff," said Watt, 23. "I work out, I go home, I grill burgers and hang out by myself or hang out with a few of the guys on the team. I'm not here for anything else but football."

The Steelers don't doubt that mindset. Watt was the only NFL linebacker with at least 50 tackles, five sacks, five passes defended and an interception last season. He led all rookie linebackers with seven sacks.

Watt put those numbers to bed months ago, telling himself more splash is needed.

Each summer, the Watt brothers rely on Arnett to set the plan in motion with a five-day-a-week schedule that accounts for every minute, just how they like it.

"They understand the importance of the little things," Arnett said. "Very consistent with always doing things the right way, the same way, all the time."

J.J.'s rehab from a left tibial plateau fracture has affected his schedule, but T.J. and older brother Derek, a Los Angeles Chargers fullback, start each NX Level session with soft tissue exercises, loosening muscles with a lacrosse ball and a series of jump exercises.

Arnett fires off buzz phrases such as "ground base activity" and "T-spine rotations" and "snatch variation" Olympic lifting when describing the workout. Then there's plyometric and de-acceleration work. All the moving parts coalesce to put the 2018 goal into focus: Be more explosive.

"It's a new season. It's a clean slate. I've got everything to prove," Watt said. "I'll go out there and try to provide as much splash."

The Watts spend Monday, Tuesday, Thursday and Friday in the facility and do something active for themselves on Wednesdays: fishing or bike riding, for example. "One day a week for them," Arnett said.

Even more intense is the diet regimen, which Arnett says requires about 7,000 to 8,000 calories and two gallons of water a day for Watt, who is listed at 6-foot-4 and 252 pounds.

Dinners with lean proteins should accompany vegetables and potatoes with color, typically orange or purple.

But having fun is allowed, too.

"I don't want these guys to feel like they aren't living," Arnett said. "Nothing wrong with a piece of pie or burritos or having a couple of beers. It's all life."

The Watts spend many summer evenings in the backyard, where T.J. plays an essential, but modest, role. 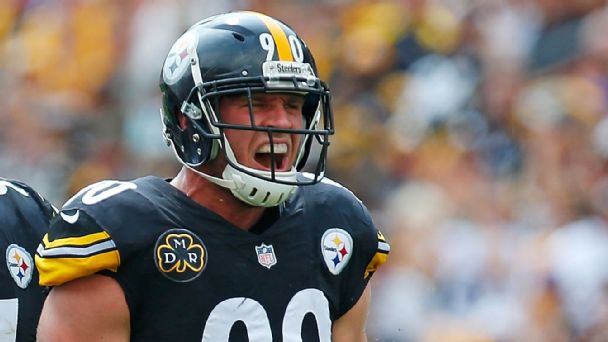 Here's what T.J. Watt puts into his body as he gets ready for the 2018 season, courtesy of trainer Brad Arnett with NX Level in Wisconsin.

Desserts: T.J. is not a big sweets guy, Arnett said.

Relaxation: "I don't want these guys to feel like they aren't living. Nothing wrong with a piece of pie or burritos or having a couple of beers. It's all life."

"I'm the wood collector," Watt said. "My dad's a firefighter, so he's always the one who likes to start the fire. I trust him more. Whenever he's not there, I do the gas fire to be safe."

Watt might not be spending countless hours in the log cabin that J.J. popularized, but the lumberman mentality is very much in place when back home.

Movies and video games are cool but utilized in moderation. The family's idea of a hobby is going on annual cruises to various beach spots, laughing at jokes inside cabins and stuffing faces with buffet fare.

When it comes to football, James sees the same person who used to slip into the Badgers facility on Sunday afternoons for sprints and film work by himself.

"He was never the one to make wrong decisions," said James, who also trains at NX Level. "He knows what he wants to accomplish, and he won't let anything get in the way of that."

That means creating a football identity apart from J.J., while utilizing the wisdom he has imparted. T.J. learned the art of being a pro from J.J., who stressed hand usage at the line of scrimmage to unlock NFL potential.

If production keeps climbing, so will T.J.'s fame. He has the look -- and the name -- of a marketable star.

But T.J. feels too unproven to even entertain those thoughts.

"I see J.J. and it's a whole other level. I'm as humble as it gets with that stuff because this can all be taken away so quickly," Watt said. "So I have my older brothers to lean on when it comes to that stuff. Until that time comes, I'm just going to ball."

Pittsburgh drafts first-rounders with the intention to play them early, but the way Watt snatched the starting outside linebacker job from stalwart James Harrison early in 2017 training camp made an impression.

For Watt's sophomore campaign, the Steelers have a new challenge -- moving him from right to left outside linebacker. Coaches believe Bud Dupree, who's explosive but often overshot quarterbacks in the pocket last season, is best suited for the blind side. Technique and hands, Watt's specialty, are crucial for the left.

"He's got strength, strong hands, long arms," Arnett said. "It will be hard to get in on him, and he understands how to use them."

Back in Pittsburgh, coaches will make sure to humble Watt when necessary.

Joey Porter, once an imposing and unpredictable Steeler who is now Mike Tomlin's outside linebackers coach, is not about to praise Watt's coverage skills just because he locked up Jordy Nelson one time last year.

Watt got beat for a touchdown on the same play against Cleveland, Porter noted.

"I don't just remember certain plays. I remember every play," Porter said. "It's all a work in progress."

Porter is hard on every player when he shows cut-ups of the 2017 season, but he knows Watt will take it. And what Porter likes is Watt rarely makes the same mistakes twice.

In May, Watt already had his sights set on next season. After an uncomfortably hot Steelers OTA session, Watt took to the tackling sled for about 10 minutes of one-on-ones, then lamented his need to make tackles in space in 2018, securing the first tackle so teammates don't have to bail him out.

Despite playing 900-plus snaps as a rookie, Watt feels well-rested and ready to mold his masterpiece season.

"Chisel away at what's going to be a finished product," Watt said. "We've got a big ice block right now and we're carving into it and making our sculpture."