Pittsburgh Steelers linebacker Ulysees Gilbert III felt like things were finally coming together last season when he got news he never expected.

The chronic pain radiating in his hip area and lower back told him something was wrong, but it was also a pain the rookie had felt on and off since college. His hip never stopped hurting through training camp, the preseason and 150 special-teams snaps of the 2019 regular season.

He was diagnosed with a fractured L-5 vertebrae in his lower back in November. Rest was the only way for it to heal. His season was done. 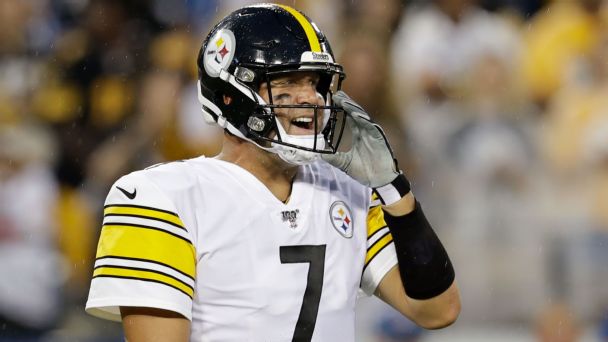 "You can't really put a cast on your back," he said with a wry laugh.

"Felt it get worse through the season and then there's one time, I felt it click in my back and the pain just rushed," said Gilbert, who logged 15 snaps against the Colts in his final game. "At that point, I just had to play the game because in the NFL, you don't really have that many backups.

"That Monday, the next after the game, it was the worst pain I ever felt. I didn't know what was going on. That's when they shut it down for me."

After being fully cleared last month, Gilbert is ready for another shot on the field, and with a couple of offseason departures in his position group, a path on the field is emerging.

"The linebacker room got real small, real quick," Gilbert said. "And then you just think to yourself, ‘This is my time. I've got to do something to get on the field.' It's really up to me what I want to do. I've got to control what I can control and at the end of the day, if I do those things, I'm hoping I'll be able to play or help Devin [Bush] and Vince [Williams] with the snaps. That's my goal."

Outside of quarterback Ben Roethlisberger's return, the depth at inside linebacker is one of the biggest areas of concern for the Steelers.

They didn't address it in the draft or free agency, but the Steelers might have a solution at inside linebacker already on the roster -- one that doesn't require 2019 top-10 pick Bush and eight-year veteran Williams to play every single snap.

"You know Ulysees Gilbert was coming along as a special-teams contributor while he learned the defense," general manager Kevin Colbert said before the draft. "Unfortunately he suffered a back injury that ended his season. But, you know, he was showing good promise to be able to be a contributor at some point.

"And we'll see where he stands."

But by releasing Mark Barron during free agency, the Steelers have a hole to fill beside him. They also lost special-teams ace and inside linebacker Tyler Matakevich, who played sparingly on defense.

As a hybrid linebacker/safety, Barron played 766 snaps, or almost 70% of the defensive reps. Veteran Williams is a candidate to take those snaps, though he excels most against the run. With Bush and Barron manning most downs, Williams' role was reduced to 401 snaps, or just 36.5% of the defensive reps. Against run-heavy teams, Williams will undoubtedly eat up some of Barron's snaps, but in passing situations, look for guys such as Gilbert and 2019 free-agent addition Robert Spillane to get more time on the field.

Gilbert and Spillane are shorter than the 6-foot-2 Barron, but all three weigh about 230 pounds. Gilbert started out on the active roster last season, while Spillane was elevated only after Gilbert went on injured reserve.

Between the two, Spillane technically has more recent on-field experience. He played one defensive snap last season. Gilbert played none. Marcus Allen, a 2018 fifth-round pick, also could take some of those reps, but he last took defensive reps in 2018 with 18 total snaps.

"It is up to Ulysees to get on the field," Bush said when asked about the second-year player's development. "I think he is a really good player. He is really talented. I think he has all the intangibles, all the athleticism to get out there and play. It is up to him to put it all together. If it comes down to me and Vince taking all the reps, then I don't think we have a problem doing that."

Despite the lack of depth, the Steelers didn't draft a true inside linebacker, but they might still use 2020 sixth-round selection Antoine Brooks Jr., who checks in at 5-11, 215 pounds, as a hybrid safety/linebacker. Strong safety Terrell Edmunds, a first-round pick two years ago, also could be used in a similar role.

But Gilbert will try to fight for a spot on the defense when the team gets back to Pittsburgh.

He hopes that the Steelers not drafting a traditional inside linebacker to play alongside Bush signals their confidence in him, but he's also aware that it doesn't guarantee him a job.

"At the end of the day, you've got to continue to work, continue to be yourself and do what you need to do," he said. "You can't get complacent knowing they didn't draft any other linebackers or anything like that. There are still people out there that want that spot. We lost Barron, and we lost Tyler. There are people that want those spots ... I have to work like they did. That's my mindset."