LANDOVER, Md. -- The emotions were difficult to process. There was sadness: When Washington Redskins quarterback Colt McCoy learned the extent of Alex Smith’s season-ending injury, his shoulders slumped, his head lowered as he dressed at his locker. This is not how McCoy wanted to get his first real opportunity in four years.

He also acknowledged being excited to play. After all, he hadn’t taken a snap in a game since the 2015 season finale and none in a game that mattered since late in 2014. And, as McCoy walked back into the locker room Sunday following his news conference, he said a few times, “I feel good.” Not about what happened, of course, but about how he felt physically and what he could accomplish.

The Redskins need McCoy to help them win the NFC East over the next six weeks. After Sunday’s 23-21 loss to Houston, they’re clinging to a one-game lead over the Dallas Cowboys, whom they play Thursday afternoon. Smith is out with a broken tibia and fibula. 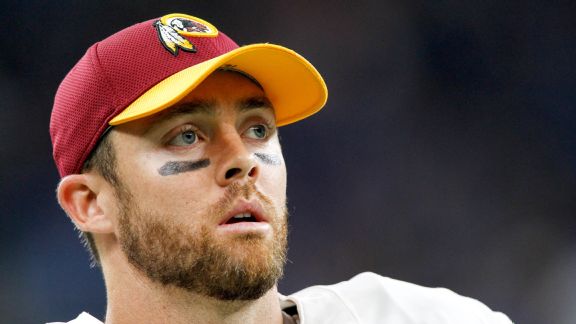 From 2016, a day in the life of Colt McCoy as Redskins backup QB: For the past four years, in relative anonymity, McCoy has worked toward a moment that came Sunday.

“I have confidence in Colt, always have,” Redskins coach Jay Gruden said. “I'm a big, firm believer in Colt McCoy's ability to play. This is an opportunity of a lifetime for him. I know he would like it in different circumstances, but things happen for a reason. He'll take advantage of it."

McCoy, 32, started 21 games his first two seasons in Cleveland, arriving as a third-round pick in 2010. Since then, he’s started only four games, all in 2014 with Washington. An injured neck ended his season in Week 15. At the time he was crushed, believing he was a perfect fit for Gruden’s offense.

The following summer, Kirk Cousins bumped Robert Griffin III out of the starting role. One player said at the time that if there had been a real quarterback controversy in the locker room, it would have been between McCoy and Cousins. In each of the last two offseasons, the Redskins considered going with McCoy and drafting another quarterback. Instead, they stuck with Cousins for one more season in 2017 and traded for Smith last offseason.

“Colt is the strongest competitor I think I’ve ever seen,” said center Chase Roullier. “He’s ready to go on every snap. He prepares like a starter every day. You know the amount of effort he shows every single day even when he’s out there leading the scout team. It’s like a Super Bowl every day for him, and he competes every day.”

That’s why he’s respected in the locker room. Two years ago, McCoy said he finally felt healthy. A shoulder injury suffered in the national championship game his final year at Texas took longer to recover from than people realized, he said.

For the past several years, McCoy has worked out with former major league pitcher Tom House in the offseason. House is a noted pitching guru who also works with quarterbacks. Four years ago, he developed a 20-minute daily exercise for McCoy’s right shoulder.

"He has significantly helped me as far as throwing the ball," McCoy said two years ago.

Sunday, McCoy completed 6 of 12 passes for 54 yards and a touchdown. He ran five times for 35 yards. He’s adept in Gruden’s offense, having played in it since 2014. He’s always felt good in the scheme and understands what Gruden wants.

McCoy’s first pass showed his comfort level, and it resulted in a 9-yard touchdown toss to tight end Jordan Reed. They recognized man coverage at the line with Reed aligned inside. When McCoy hit his final step, he dropped a perfect pass to Reed headed to the corner of the end zone.

“He gets the ball out of his hands immediately,” Reed said. “He knows where he’s going pre-snap based on reading the coverage. He’s got all that arm talent in the world, and now it’s his turn.

Others might dispute Reed’s description of McCoy having a cannon, but he does throw with anticipation, and that allows the ball to arrive before the defensive back often is ready.

McCoy posts motivational notes in his locker or even in his truck. He’s well aware of quarterbacks who get a chance later in their careers and make something happen. One of them attended Redskins practice Friday: Trent Green. He sat for three years before getting a chance in 1998, his fourth season in Norv Turner’s system. Green played well and received a big free-agent deal from St. Louis.

“I’ve grown up. I’ve grown up a lot,” McCoy said. “I feel comfortable in this system and how we execute our offense."

The Redskins are still built around wanting to run the ball and stop the run. It hasn’t always worked, so when they fall behind, they will need McCoy to make some plays. He did that Sunday -- almost getting a comeback win.

“You pray for opportunities to get to play. You never like to see how it happened [Sunday],” McCoy said. “I’ve been a starter before, had it taken away, and it’s not a good feeling. I kind of battled my way back. Been here for a while now, so hopefully I can go out there and play good ball and help our team win. Alex has got us in great shape."