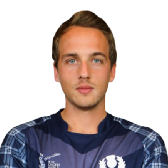 They have now won three in three to make it to the Super 12s in the most emphatic fashion by beating Oman, whose off day with the bat made this a one-way traffic. Scotland now top Group B, and are bunched alongside India, Pakistan, New Zealand, Afghanistan and one of Namibia or Ireland in the next round.

If you are in the USA, watch the Oman vs Scotland highlights on ESPN+ here in English, and here in Hindi

Scotland strike early
Pressure can do strange things. Jatinder Singh, who smashed the ball with abandon in the first two games to make 73* and 40, was run out trying to steal a single to mid-on, off the second ball of the match. Once Aqib Ilyas, his opening partner, turned his back on him, Jatinder had nowhere to go. In the second over, Safyaan Sharif benefited from hitting the hard length as Kashyap Prajapati was rushed into a pull he was in no position to play as he skewed a simple catch to mid-off. At 13 for 2 in the third over, it was a nightmare of a start for Oman.

Ilyas counters before holing out
Trying to make amends for the run-out gaffe, Ilyas began by flicking Brad Wheal over fine leg off the fifth ball of the match and continued to take the attack to the other bowlers. He picked boundaries off the pads and straight down the ground, accounting for 29 of Oman's 37 runs in the powerplay. It wasn't all blemish free for Scotland, though. First, Chris Greaves overran the ball to concede a boundary to a slog sweep in the ninth over off Ilyas. Two balls later, Wheal mistimed his jump at short fine leg to reprieve Ilyas on 36. But even before Scotland began to wonder if it had cost them, Ilyas would pick out long-off to give Michael Leask a wicket off his third delivery, in the 10th over.

Zeeshan rides his luck
Maqsood began slowly and tried to rebuild the innings by nudging the ball into the gaps. His first sign of going big, however, nearly resulted in a wicket as he mistimed a Greaves full toss to deep square leg in the 14th over, only to find out it was a waist-high no-ball. He had another reprieve in the next over when Sharif, the bowler, and Coetzer, running to his left from cover, briefly froze in trying to catch a skier. By the time Coetzer attempted the catch, he was late, and the catch was grassed.

Coetzer then had three full stumps in view to effect a direct hit at the bowler's end but missed that as well. On 14 then, he kept the runs ticking to score 34, even as wickets continued to fall around him that meant Oman didn't get the finishing kick. Eventually, Maqsood would hole out to sweeper cover to give Josh Davey his second wicket. Oman were bowled out of the last ball of their innings for 122.

Munsey, Coetzer begin well George Munsey came out playing shots: cutting short balls, reverse sweeping tossed up deliveries and punching the hard length through cover. And in trying to play one shot too many, he was out pulling one straight to deep square leg in the fifth over. The pulsating start allowed Coetzer to settle in, but once Oman struck, he stepped up to end the powerplay with a stunning inside-out hit into the stands over deep cover. In the next over, he biffed a short ball into the hospitality area over deep midwicket. The rush of shots had a deflating effect on Oman as Scotland had raced away to 58 for 1 in seven overs.

Then came a bit of a slowdown after Coetzer's fall, and just as Oman were beginning to claw back through their spinners, their fielding let them down. The in-form Richie Berrington sliced a slog to point off Maqsood's left-arm spin, as Ilyas misjudged a catch by rushing in a tad early. It would have been 82 for 3 then, but Berrington broke the shackles soon after by launching two massive sixes downtown in the next over. Scotland moved past 100, the asking rate came down to below four an over and Oman were to soon be deflated. Berrington hammered the final nail for Oman by muscling a six over deep midwicket as Scotland added a famous chapter to their cricket history.