The Premier League's traditional Boxing Day fixtures were decimated by COVID-19 postponements and only six games went ahead. But what a set of fixtures they were.

Manchester City beat Leicester 6-3 in a nine-goal thriller that picked up the record for most goals scored on Boxing Day since the Premier League began in 1992.

Arsenal crushed Norwich 5-0, Chelsea came from behind to overcome Aston Villa 3-1, while West Ham lost to Southampton 3-2 and Tottenham beat Crystal Palace 3-0. The lowest scoring game of the day then saw Brighton score twice to seal a 2-0 victory against Brentford. Phew!

But even if another four games had been played with goals at that average, a haul of 44 doesn't even come close to the all-time record of Boxing Day goals in 1963.

On Boxing Day 1963, in the midst of the "Big Freeze," the English First Division experienced a glut of goals unlike anything before. In total, 66 were scored in the 10 matches in the top flight, while across all four divisions 160 were netted, with seven players bagging hat tricks and four men sent off. Here is what happened.

Fulham 10-1 Ipswich was a result that remains both Fulham's record league win and Ipswich's heaviest defeat and was all the more impressive as the Tractor Boys had been champions only 18 months earlier. Ipswich's deep-lying forward Jimmy Leadbetter had received plenty of praise in the previous season but was outdone on the day by winger Joe Broadfoot, who was remarkably given a standing ovation by the home fans after giving defender Jim Langley a torrid afternoon, despite the heavy defeat.

The game was essentially over after just 20 minutes as Fulham's Maurice Cook opened the scoring, before Graham Leggat bagged the fastest ever hat trick in the First Division within a three-minute period on a quagmire of a pitch. Fulham continued to rip Ipswich apart and Bobby Howfield then picked up three goals of his own, with Bobby Robson, Alan Mullery and Leggat's fourth finishing them off. Gerry Baker's consolation was a rare moment of joy for the away support.

Fulham boss Bedford Jezzard said after the game: ''It must have been those lovely turkeys we gave 'em for Christmas. From now on, they get one every week." Ipswich chairman John Cobbold could only retort: "It could have gone either way, until the match began." 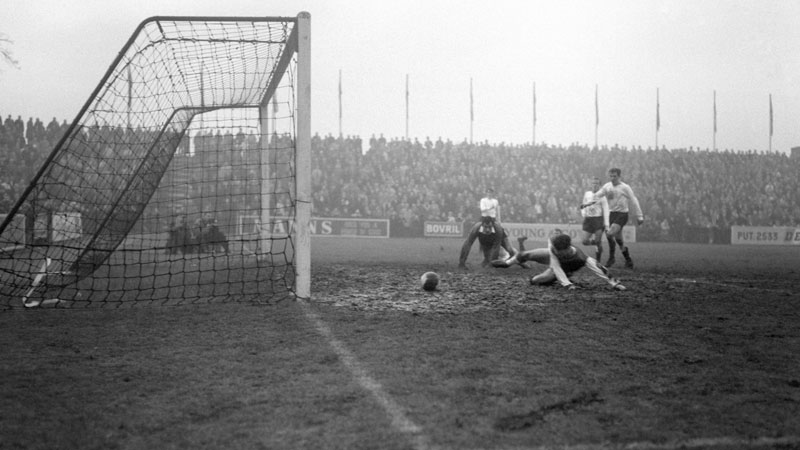 Fulham's match with Ipswich was played on a quagmire of a pitch (Photo credit: S&G/PA Images via Getty Images)

League leaders Blackburn won 8-2 against West Ham away from home, as they enjoyed another trip to London. Earlier in the season, Rovers had hit seven against Tottenham and four against Arsenal and inflicted the heaviest-ever home defeat on a West Ham side who had not won in the First Division since Nov. 2.

The Guardian's Albert Barham summed up the game thus: "Everything West Ham did was tinged with misfortune. Everything Blackburn did was coldly calculated and correct."

Amid a row over the length of the Baggies' trousers, West Brom came back from 4-2 down to secure a thrilling 4-4 draw at the Hawthorns. Days earlier, West Brom's players had gone on strike when they were told by manager Jimmy Hagan that they would have to wear shorts while training in freezing conditions, but peace was reached ahead of their Boxing Day fixture and the Daily Mirror's Ken Jones wrote that "the only crisis at the Hawthorns was in the Spurs defence."

Hagan's men looked as if they might crumble when Jimmy Greaves volleyed his side into the lead and Baggies' skipper Don Howe blasted a penalty over the bar after a quarter of an hour, before Greaves set up Bobby Smith for his 200th league goal. The home side rallied and got back into the game with a John Kaye header, but it was soon 3-1 as Cliff Jones got one of his own. Clive Clark closed the gap again and made it 3-2, but Greaves proved the inspiration for Spurs once more to put them two clear for the third time in the game.

The Baggies were not done though and, perhaps spurred on by the cold, Mickey Fudge finished off a mazy 60-yard run from Clark before Howe made amends for his penalty miss by grabbing an equaliser with 10 minutes to go to make it 4-4. Spurs held on for the draw but failed to keep up with Blackburn at the top of the league and ultimately finished the season in fourth place.

Five of Liverpool's goals in a 6-1 win against Stoke were scored in the second half and Roger Hunt stole the headlines by netting four of them. Ian St John began the scoring, and it was only 1-0 at half-time, but Hunt took over with a quick-fire brace inside three second-half minutes and Alf Arrowsmith added the fourth. Another double from Hunt ensured that the Reds were well and truly on their way to glory, with Hunt (31 league goals), St John (21) and Arrowsmith (15) providing a vital contribution toward the club-record 92 goals in the First Division that season as Bill Shankly's side went on to claim the title.

Andy Lochhead was another to claim four goals as Burnley beat Manchester United 6-1, but it was 18-year-old Scottish schoolboy trialist Willie Morgan who caught the eye of The Guardian's Eric Todd, who wrote: "[His] all-round performance was one of the best I have ever seen from one of such tender years." The Clarets were organised and compact as they set about dismantling the FA Cup holders, and it was down to Morgan's mastery that a series of frustrated fouls ultimately resulted in a red card for United defender Paddy Crerand.

Lochhead opened the scoring early on after good work from John Angus, and it was 22 minutes before Burnley allowed United their first shot on target -- a tame effort from Bobby Charlton. The equaliser came from David Herd, but with Ray Pointer, Brian O'Neil and Lochhead in such form that Todd wrote "United never seemed likely to stop any of these characters," Burnley roared on and Lochhead's volley flew past David Gaskell before the break.

With Morgan taking command in the second half, the youngster scored his first for the club, then set up Lochhead as the duo added two more goals between them before the end. United were humbled, and the defeat would cost them dearly as they finished four points behind Liverpool at the top of the First Division.

While slightly overstating the scoreline, given the others on show, the first line of the Daily Mirror's match report sums Blackpool 1-5 Chelsea up. "This was a massacre,'' it read. "Everyone could have gone home at half-time."

The Chelsea players had spent Christmas Day in a seaside hotel in preparation for the game, but they showed little desire to hang around once the whistle went and put the game beyond reach before the break. Blackpool goalkeeper Tony Walters was kept busy early on but could not stop Albert Murray from opening the scoring, and Barry Bridges dived in to head the second soon after. Bobby Tambling then hit the third before Bridges bagged another before half-time to make it 4-0.

Blackpool made some positional changes, but Chelsea were "always that yard further to the ball" and, although Dave Durie got a goal back, saw out the game with a strike from the unselfish Terry Venables. Evidently all that the Blues had to lament was that full-back Eddie McCreadie was booked.

By comparison, the rest of games on show that day were poor, even though they contributed 17 goals between them. Nottingham Forest's 3-3 draw with Sheffield United was arguably the most interesting as the Blades were three behind and came back to secure a point with two goals from Mick Jones and one from Len Allchurch.

A midlands derby between Wolves and Aston Villa ended 3-3, although both finished within 10 points of the drop, while Sheffield Wednesday hammered Bolton Wanderers 3-0 to condemn the Trotters to a run of results that would ultimately see them relegated. Managed by future Barcelona boss Vic Buckingham, the Owls won through a Colin Dobson brace and one from Mark Pearson.

The lowest-scoring game of the day was played at Filbert Street as Leicester City shocked the current champions Everton 2-0. The Toffees lost their title to their bitter rivals come the end of the season and The Sun later maintained that, after the Boxing Day bonanza, "the pendulum of power on Merseyside had tellingly swung from blue to red."