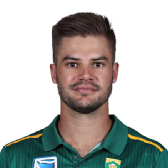 A grand finale will close the first series of West Indies' home summer and they will be itching for silverware, especially after losing the Test series 2-0. West Indies have held the lead, then fallen behind and then drawn level to lock this five-match series at 2-2, and create the kind of pressure South African teams (and their opposition) dream of.

South Africa have lost eight out of the 10 deciders they have played in, only beating New Zealand home and away in 2012. Can they take a turn for the better here?

There's another reason why this finale is important for the visitors: they are on a five-series losing streak in the format. With just two series left to play (in Ireland and Sri Lanka( before the T20 World Cup this October, they need to find form.

There are still a lot of eyes on Mark Boucher and his management team following their limited success over the 20 months they've been in charge. Though one result isn't going to change things drastically, a trophy will make a big difference.

Win or lose, South Africa will still have combination concerns, especially around the length of their batting line-up and the composition of their attack. Their specialist-heavily XI has left them short in both departments and they may have to cast the net wider to the allrounders.

West Indies do not tend to place as much weight on bilateral series, because they often only have their best players all available for major tournaments. This time around, though, they're near full-strength. The superstars have come out and shone to a degree but West Indies will know if they can get all the heavyweights firing together, they will have the makings of a side that could dominate any opposition.

This will also be Grenada's last hurrah of the international season and it has shown itself to be an excellent venue of the format after hosting just one T20I before this series. The pitches have been fairly challenging for batters, with good bounce on offer and slightly tacky surfaces, and have suited bowlers who have been able to adjust to taking pace off the ball while the spinners have prospered. Given that T20I cricket is a game of adaptability, St George's has provided an interesting test of skill.

Talk of the West Indies' veterans often centre around Chris Gayle, Kieron Pollard and Dwayne Bravo but Fidel Edwards merits to be in the same category. Edwards is 39 and has made his comeback after six years as a Kolpak exile (South Africa, are you watching?) and got particular praise from Bravo for opening the bowling with an "aggression that has sometimes been missing." Edwards only bowled two overs, and they were fairly expensive, and it's too early to tell exactly how much he will add to the West Indian pack but with experience in England, the ability to swing the ball and longevity on his side, he is definitely one to watch.

South Africa have anointed David Miller as their finisher, a job captain Temba Bavuma says the left-hander has done "for many years," though the current numbers do not reflect that. Miller has scored 34 runs in four innings in this series and that is not for lack of time in the middle. Miller has been in in the 11th over twice, and in the 15th over once and has been out going for the big shot on each occasion. What's evident is that Miller knows he needs to clear the boundary but he has only managed one six in the series so far and South Africa will want plenty more.

The lengthening of the batting line-up through the inclusion of both Chris Gayle and Shimron Hetmyer worked well for West Indies, so they may choose to go that way again, at the expense of Jason Holder, who was not in the 13 named for this game. Left-arm spinner Fabian Allen is unavailable after injuring his shoulder on Thursday, which could hand Akeal Hosein a debut. West Indies have also included left-arm pacer Sheldon Cottrell in the 13, for the first time in the series.
West Indies (probable): 1 Lendl Simmons, 2 Evin Lewis 3 Chris Gayle, 4 Shimron Hetmyer, 5 Kieron Pollard (capt), 6 Nicholas Pooran (wk), 7 Andre Russell, 8 Dwayne Bravo, 9 Akeal Hosein 10 Fidel Edwards 11 Obed McCoy

South Africa will likely want to give Aiden Markram another opportunity in the middle-order. They also seem comfortable with him as the sixth-bowling option, which could mean no opportunity for Kyle Verreynne on this tour. Lizaad Williams may get luckier, especially if Anrich Nortje does not recover from bruising on his left knee in time to play this match. Even if Nortje does, Williams may displace Lungi Ngidi, who has been expensive thus far. Sisanda Magala, who may have come into contention, has an ankle niggle and is unavailable for selection.

Tropical storm Elsa brought rain to Grenada for parts of Thursday and Friday and may linger into Saturday but the forecast for the afternoon looks relatively clear. There's a small chance - under 25% - of rain during the match. Heavy showers may weigh the outfield down and could also affect the pace of the pitch. Markram said he noticed the wicket had slowed up a bit in the fourth match after the previous three games.

"We had a long discussion last night about what it means to represent West Indies, what it means to be two-time World Champions and to keep playing the game with passion and pride."
Dwayne Bravo reveals how West Indies dug deep to mentally prepare themselves for levelling the series 2-all in the fourth match.

"The way we lost the game wasn't about us batting first or second. From a bowling front, we conceded a 20-runs in the first over and upfront, that puts you under pressure and then to finish off the bowling innings like that - it doesn't matter if you are bowling first or second. And then batters didn't pitch up."
Temba Bavuma is not convinced there is an advantage to setting a target or chasing in this series and was critical of his team's overall performance in the fourth match.