Manchester City have announced that plans are afoot to honour David Silva with a statue outside their stadium.

Silva has moved on after his majestic 10-year stint with the club came to an end with defeat against Lyon in the Champions League quarterfinals.

The 34-year-old maestro will return to Spanish football after agreeing a surprise move to Real Sociedad, having been heavily linked with Italian club Lazio.

Shortly before that move was announced, it was confirmed by City chairman Khaldoon Al Mubarak that Silva's "transformational" impact at the Etihad will be marked with a monument outside.

"David's statue will act as a lasting reminder of the wonderful moments that he gave us, not only as an incredible footballer, but as an inspiring ambassador who represented this football club with great dignity at all times," Al Mubarak said.

Chairman Khaldoon Al Mubarak has revealed plans for a tribute statue to @21LVA to be installed outside the Etihad, while a training pitch with bespoke mosaic will also be dedicated to El Mago at the City Football Academy.

It was also confirmed that Vincent Kompany will be honoured in the same way after the former City captain announced his retirement from football on Monday.

Jump to: The Best | The Worst

As we've seen countless times before, having a statue produced in your honour can be a mixed bag for footballers. Depending on the vision and skill of the artist, it can be either a life-affirming blessing or a hideous curse.

It's basically a 50/50 call up until the point the velvet cloth gets removed, as the following examples duly attest. 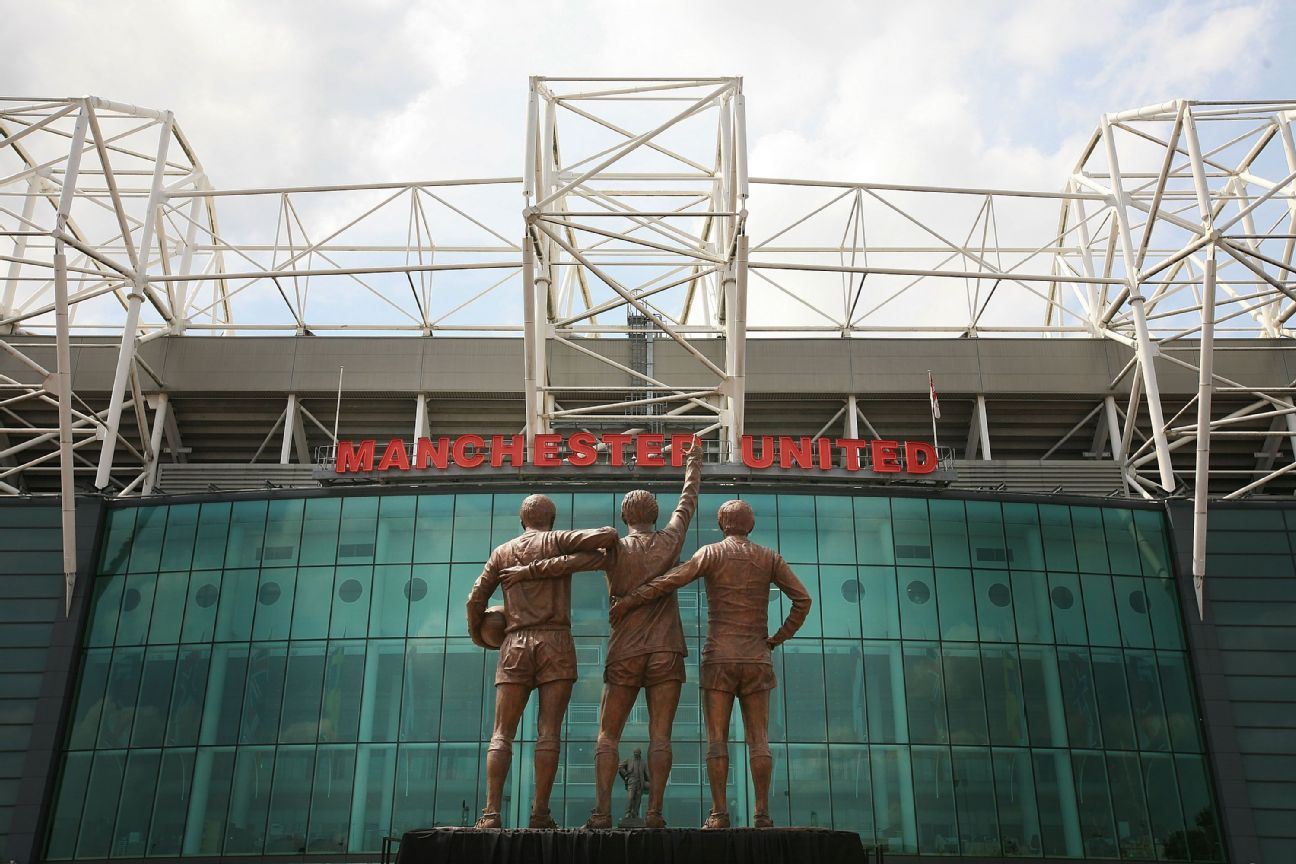 Put simply, United's tribute to three of their greatest players -- Sir Bobby Charlton, George Best, and Denis Law -- is the perfect example of how football statues should be done. It is so iconic that it is even included in the Lego version of Old Trafford. 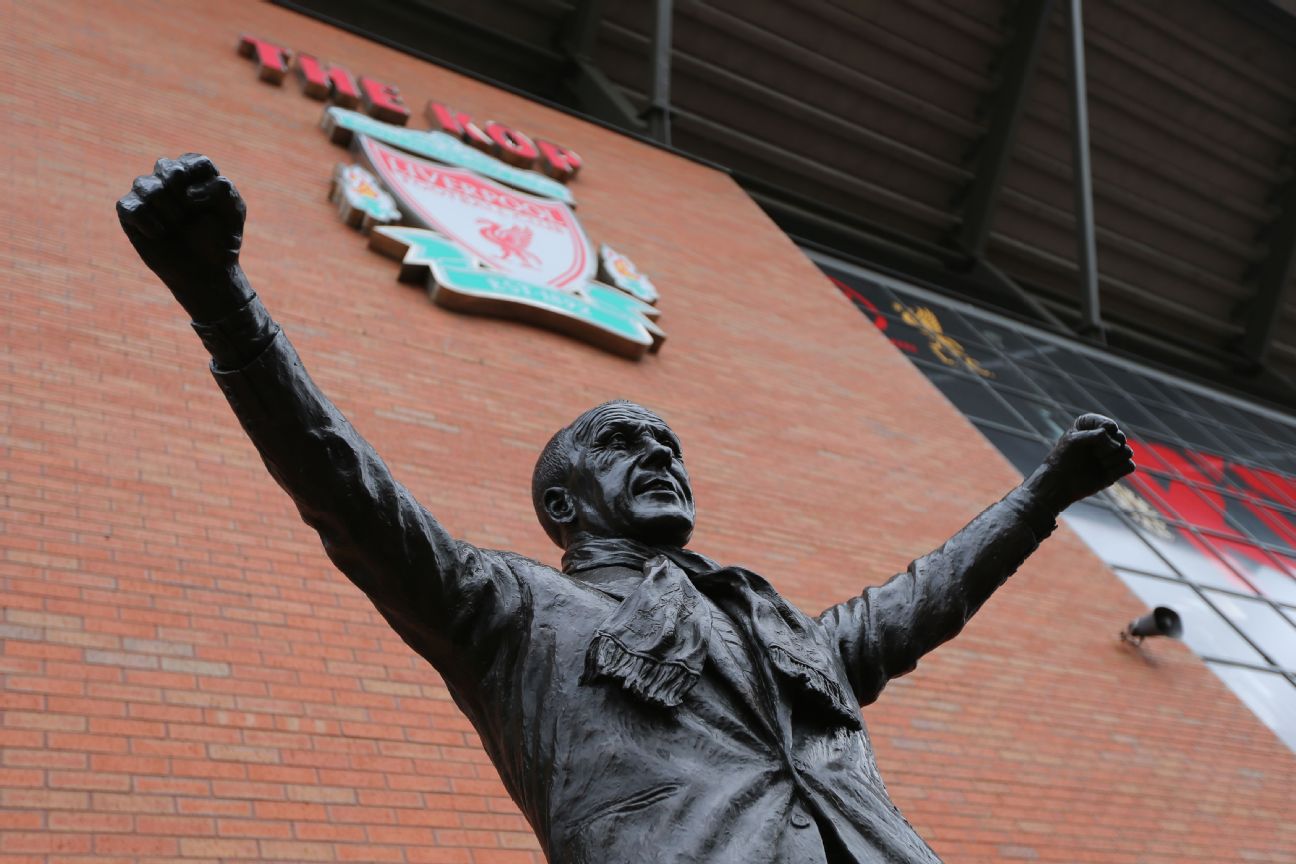 The outstretched arms of Shankly, the manager who won three league titles at Anfield and laid the foundations for the club's glorious modern history, are a familiar sight greeting all Liverpool fans making their way into the Kop end. 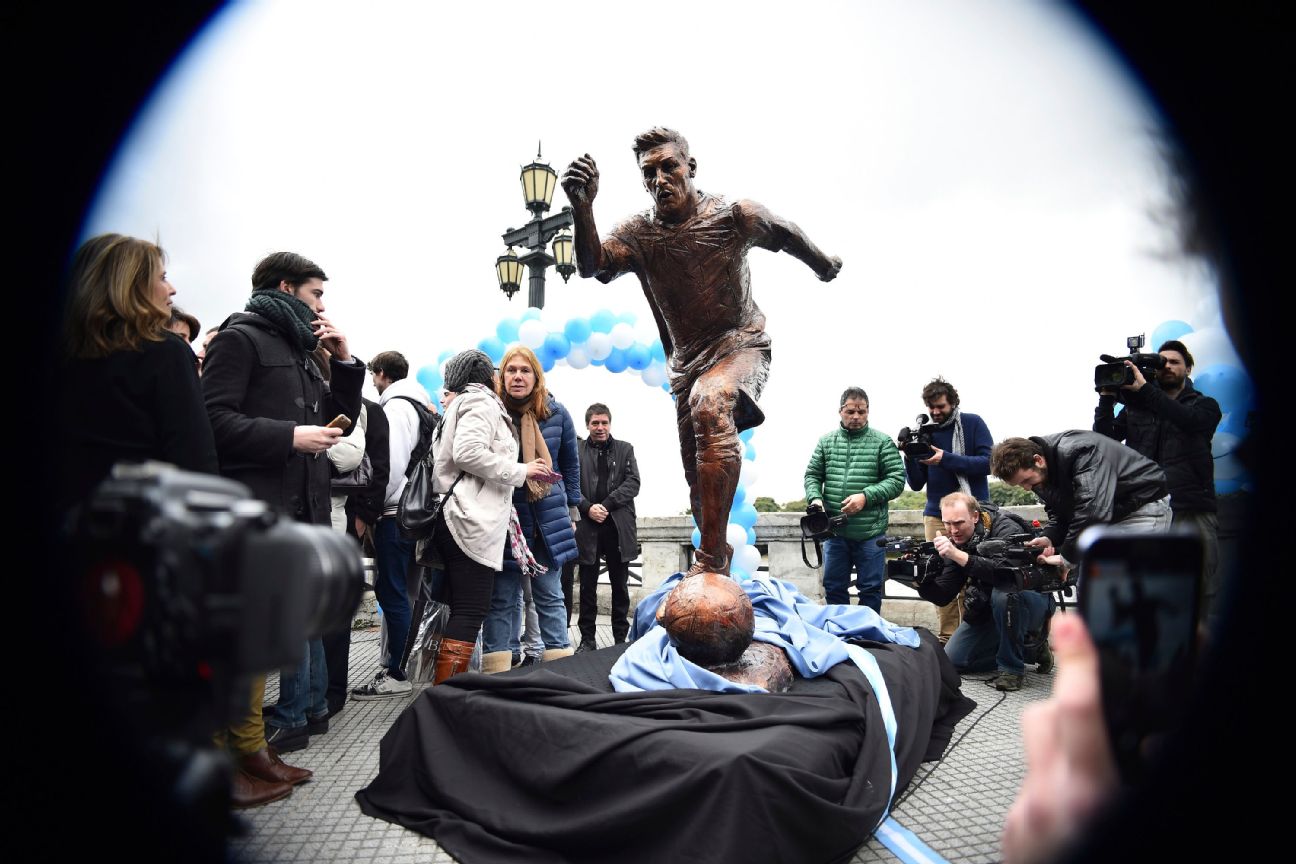 Argentina and Barcelona captain Messi was honoured with a rather good depiction of him waltzing past defenders on the prestigious Paseo de la Gloria ("Walk of Glory") in Buenos Aires.

The statue took pride of place until vandals managed to steal the entire top half just six months later. 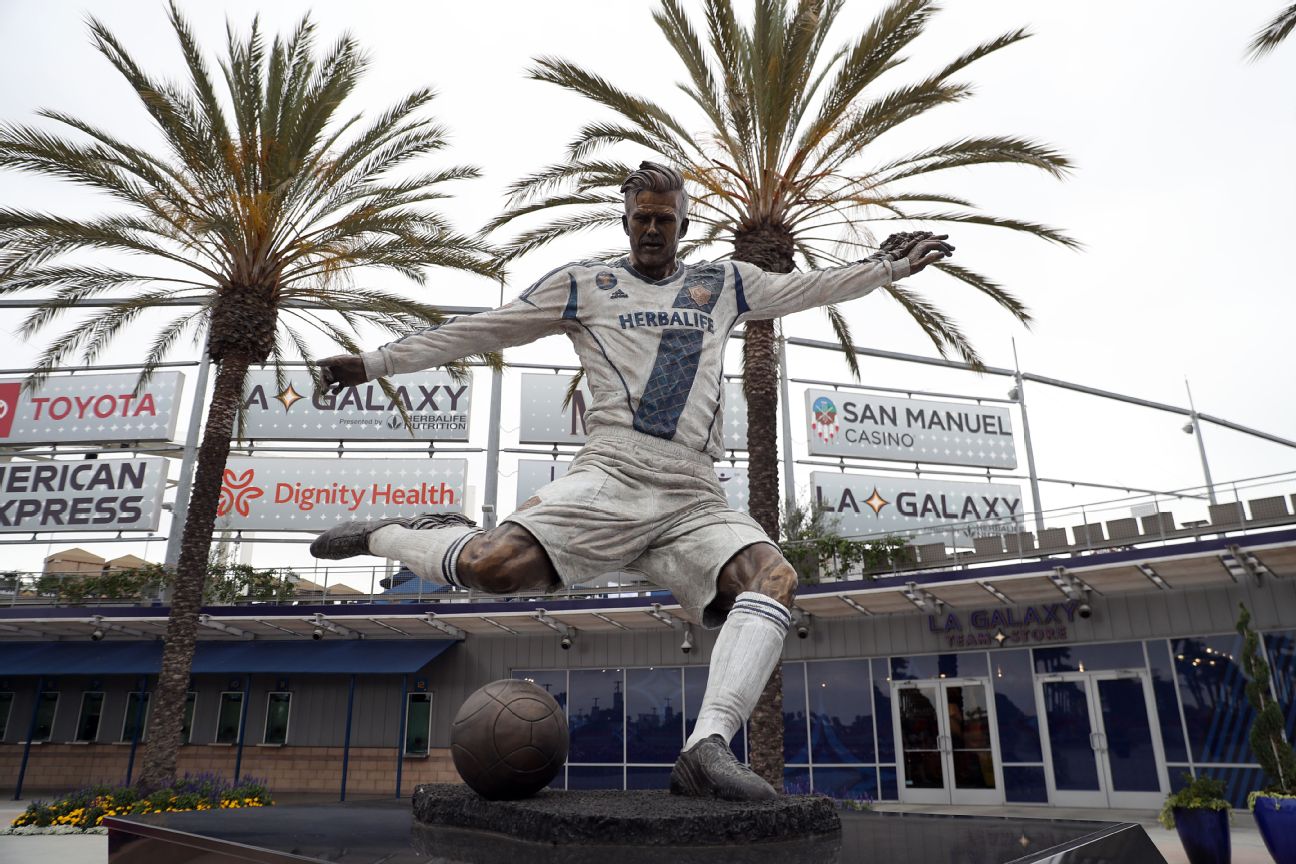 LA Galaxy did well to capture the renowned handsomeness of their former star when the bronze Becks was installed in Legend's Plaza outside the Dignity Health Sports Park. 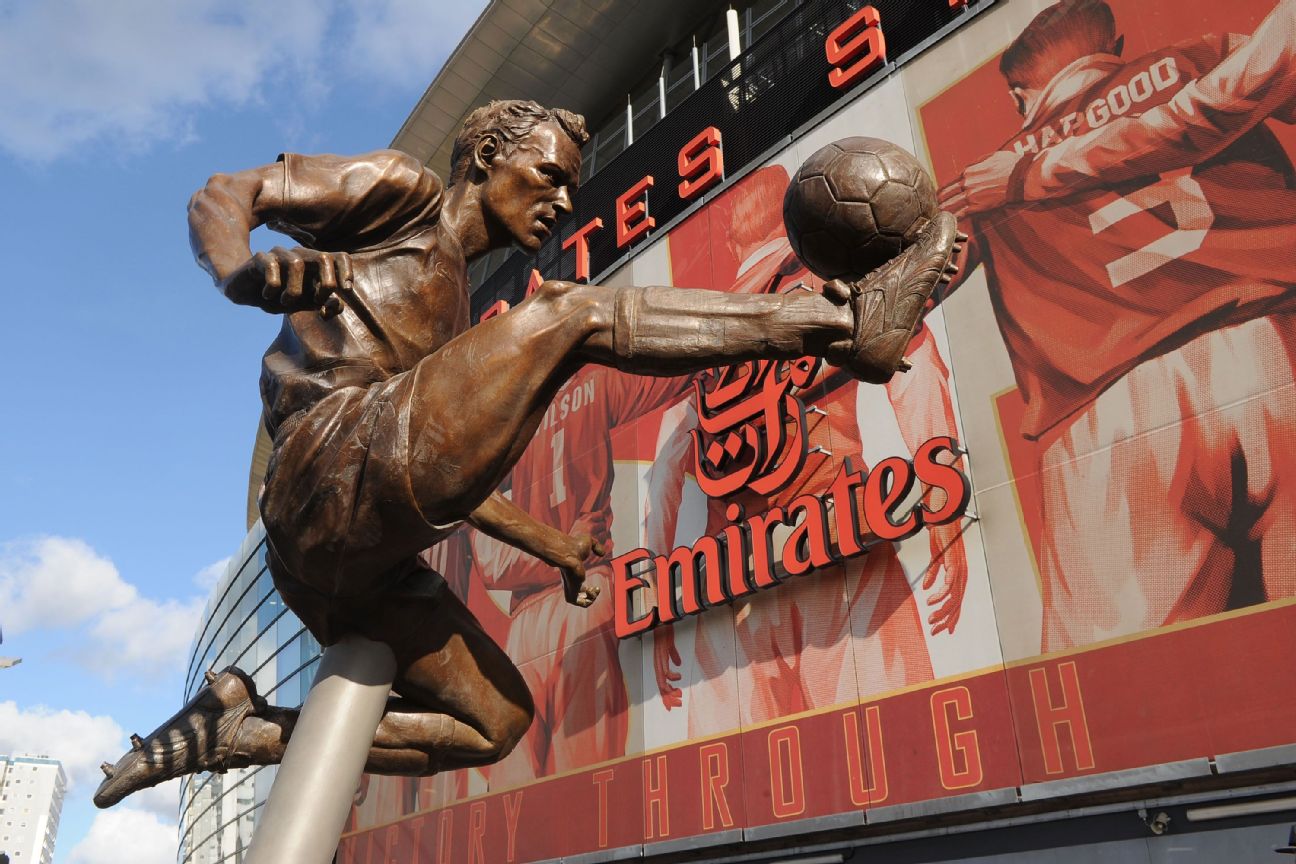 Arsenal have an array of statues outside their stadium, with Thierry Henry, Tony Adams and Herbert Chapman all dotted around the forecourt.

However, we have a particular soft spot for the Bergkamp bronze if only because the depiction of a famous aerophobe leaping through the air is amusingly ironic. 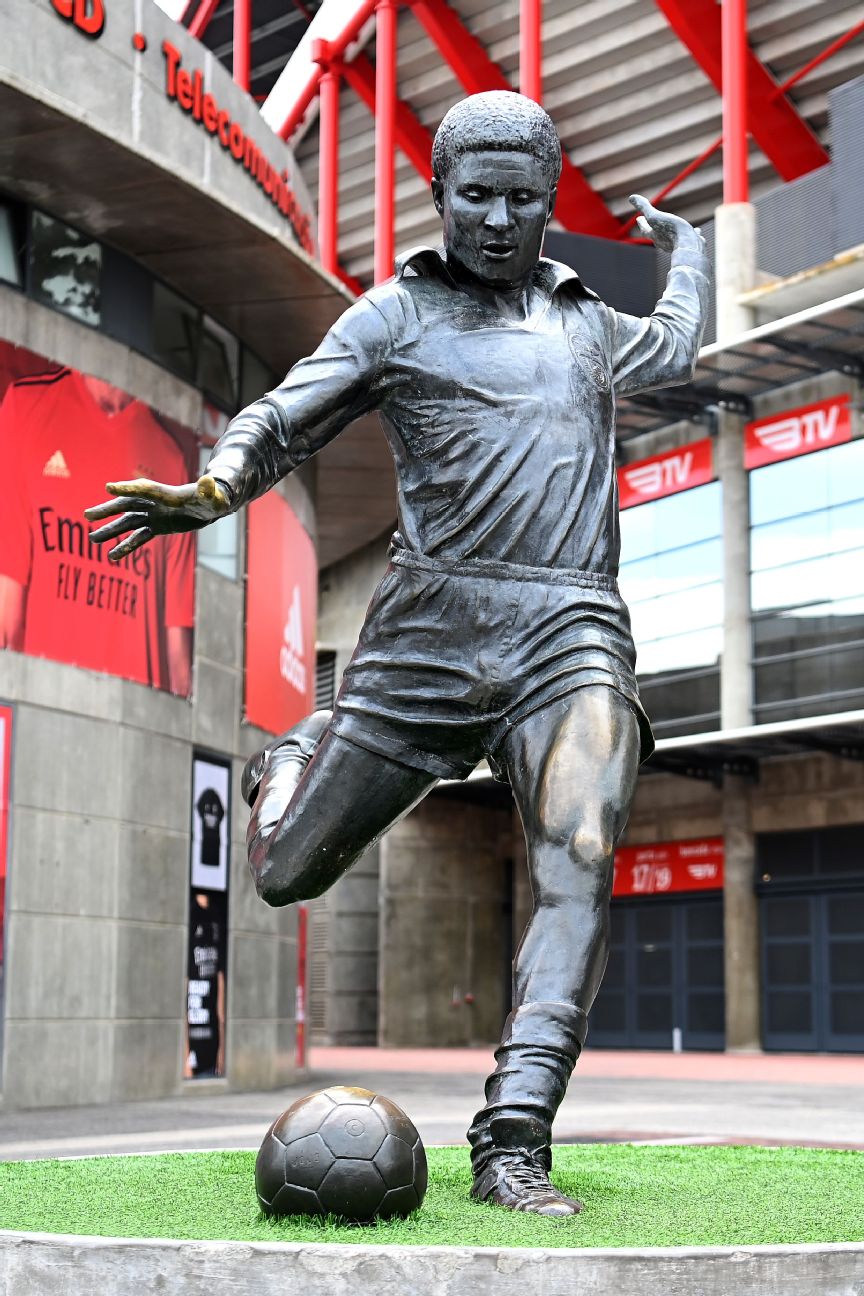 Benfica have a beautifully elegant bronze of legendary striker Eusebio outside the Estadio da Luz, paying humble tribute to one of Portugal's most enduring heroes. 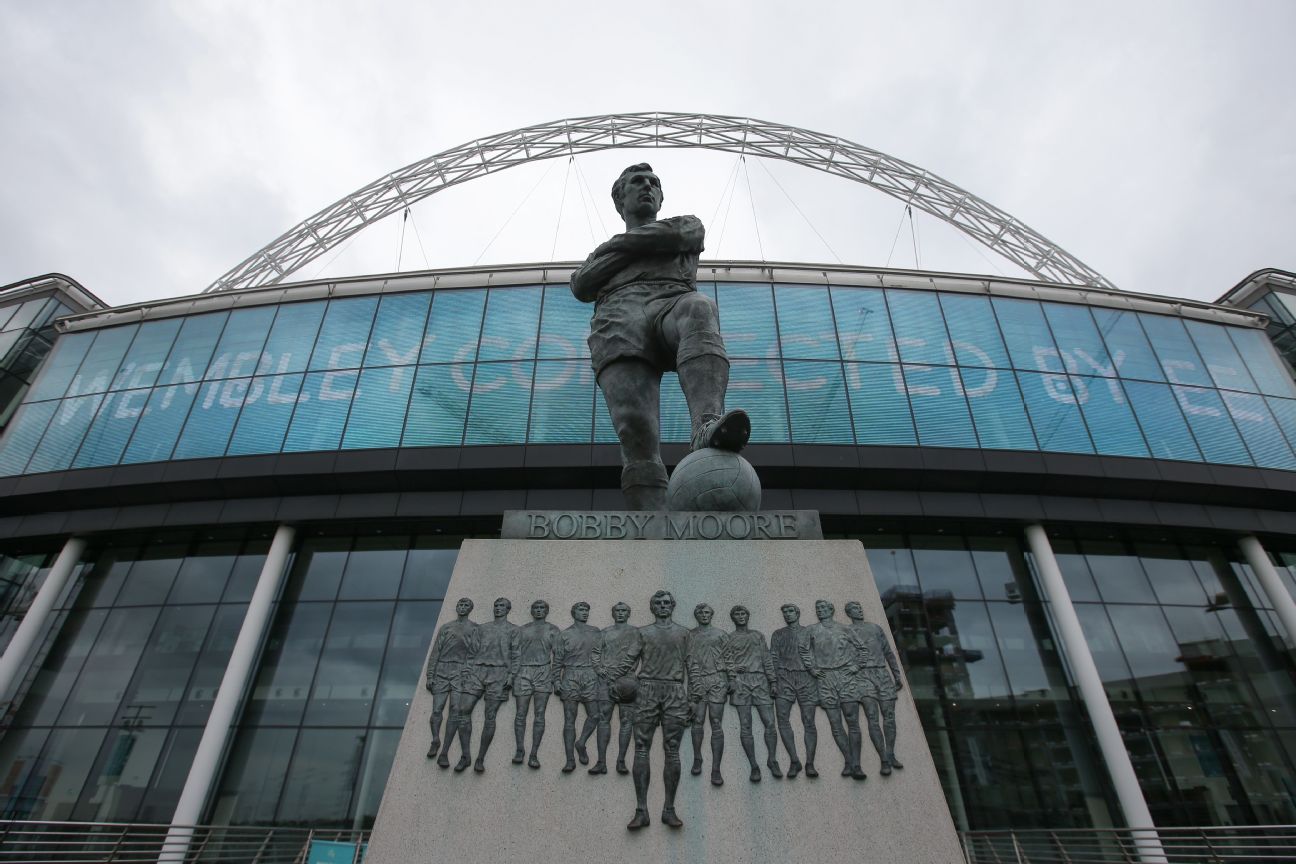 Moore is the only England captain to have lifted a World Cup so it's only right that his statue outside Wembley is a thing of dignity and prestige. 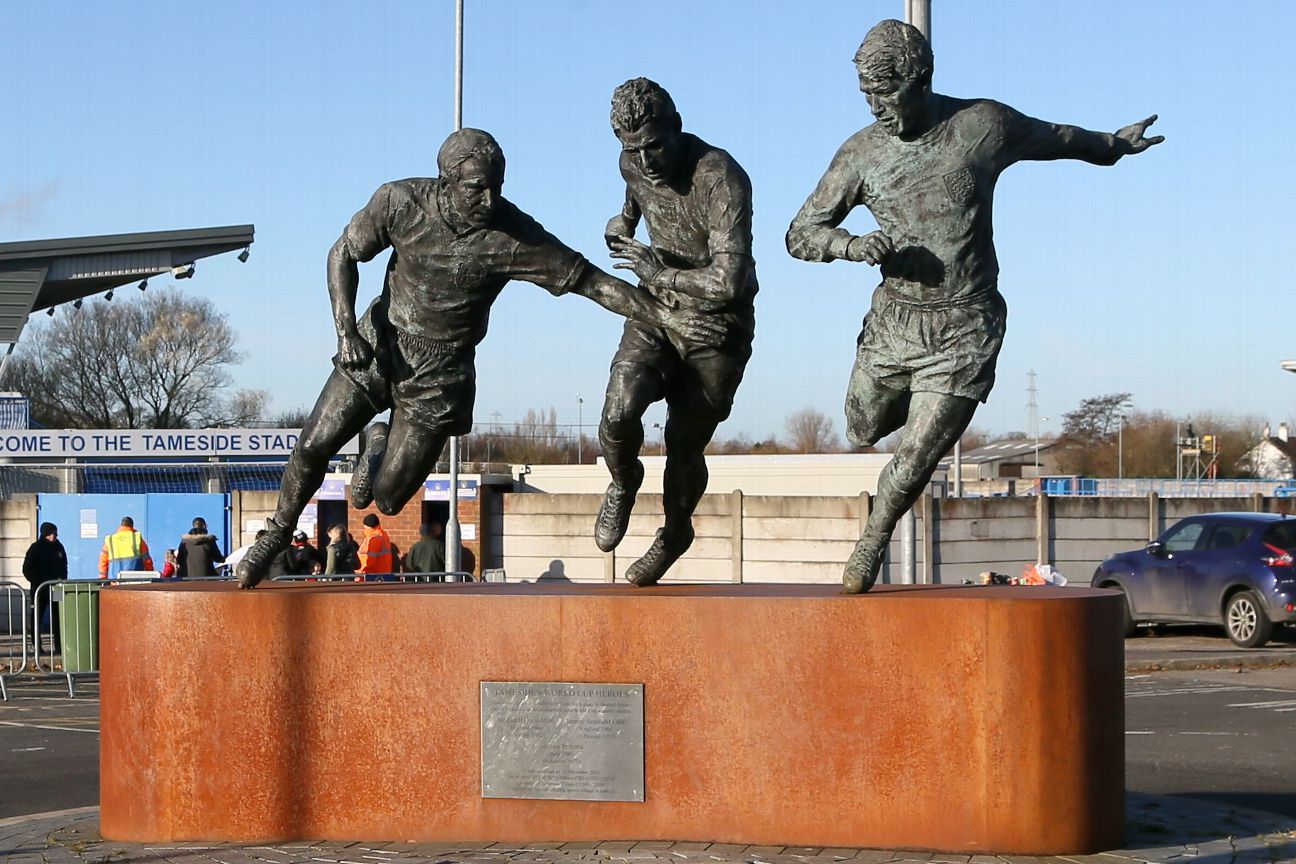 This is because Perrotta was born and spent the first five years of his life in Ashton before moving to Italy and beginning his football career, which was enough to earn him a nod from Tameside Council in 2010.

Perrotta had absolutely no idea about his statue until he was finally alerted about its existence by his uncle, who still lived in the town, seven years later. 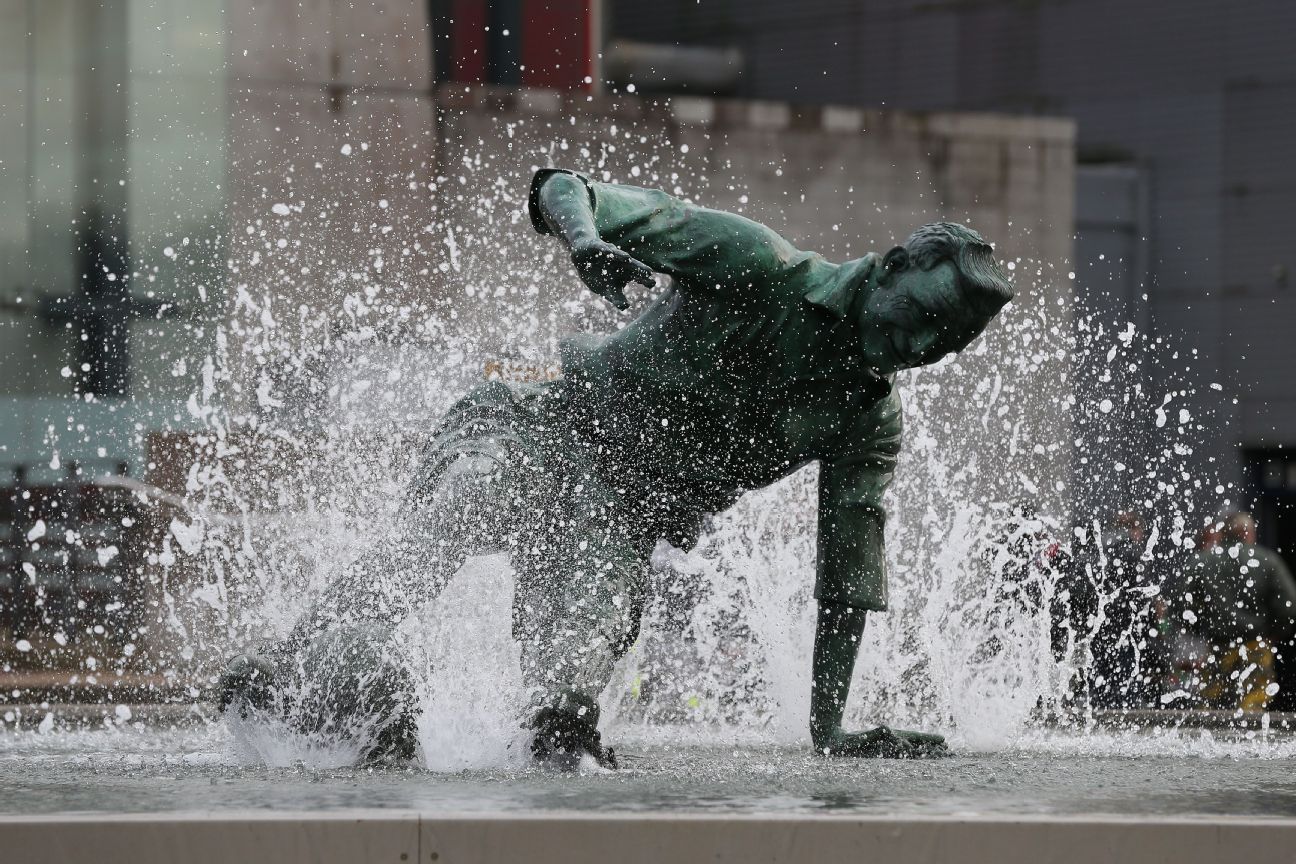 In order to recreate the iconic image of England legend Finney sliding through a huge puddle during a game in 1956, the National Football Museum ingeniously incorporated a fountain into their statue.

Something tells us the striker affectionately known as "The Preston Plumber" would approve. 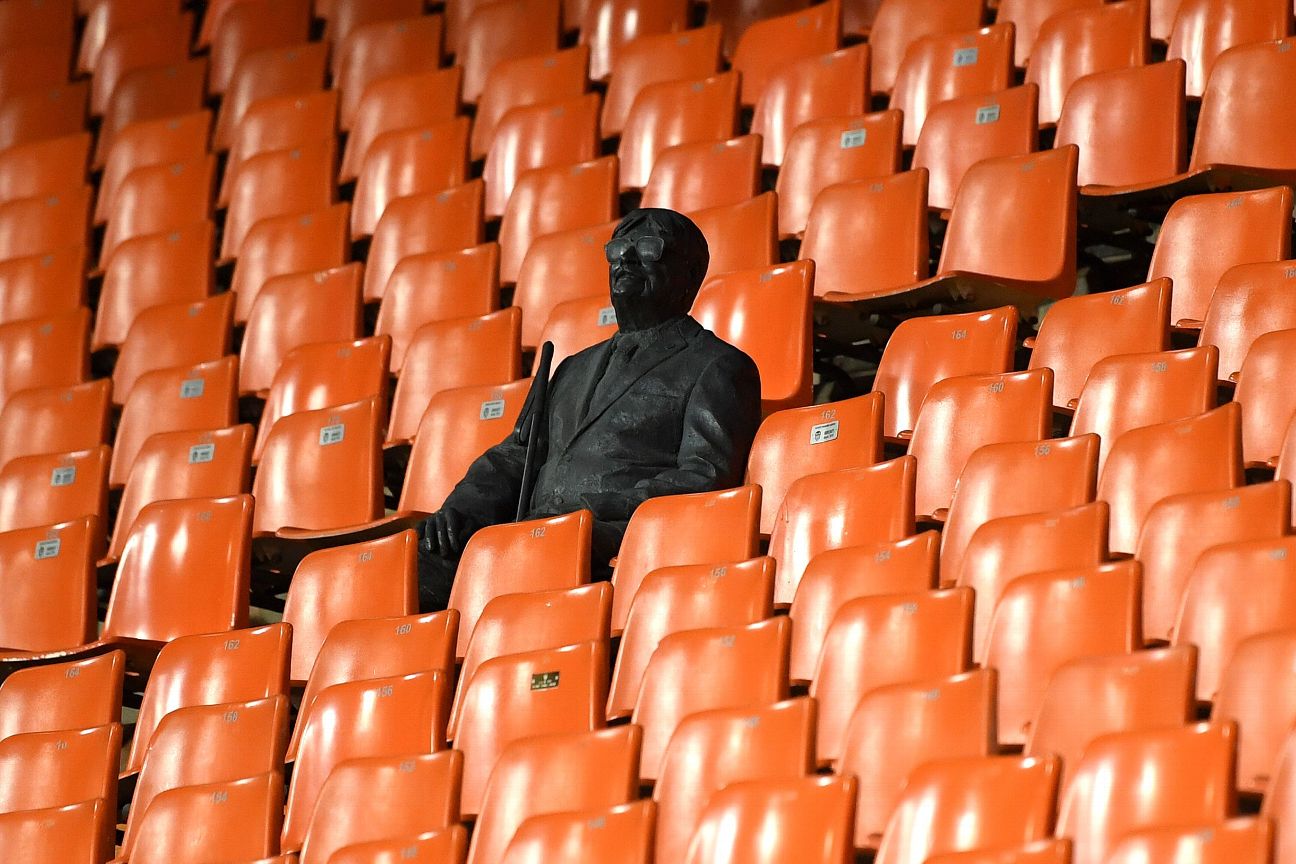 When lifelong Valencia fan Vicente Aparacio passed away in 2017, the Spanish club decided to reward his years of loyalty by installing a lovely permanent memorium in his favourite vantage point: seat 164, row 15 in the Tribuna Central stand at the Mestalla stadium. 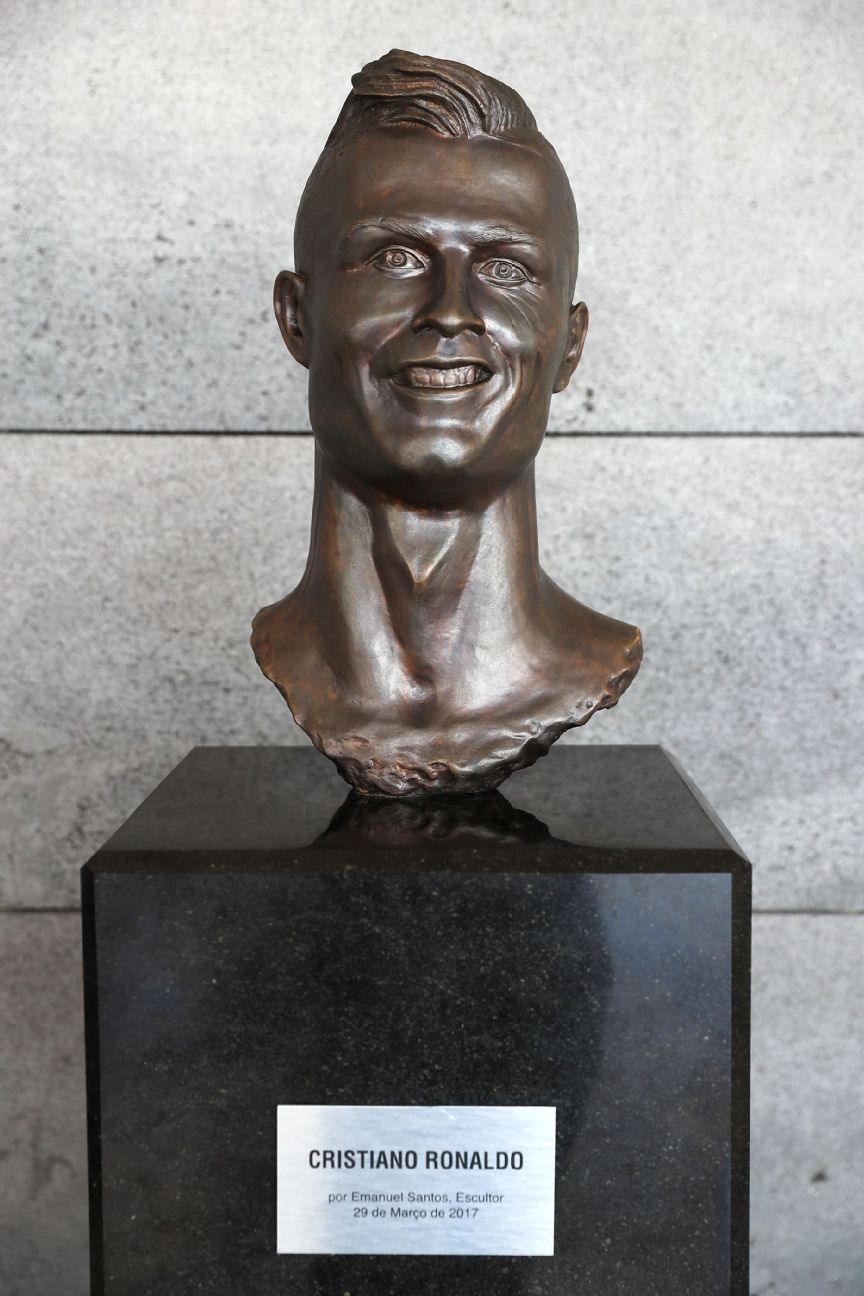 OK, let's just address it now, because we're all thinking about it. Quite simply, the most bewilderingly bad attempt at capturing any human being's essential likeness in the history of bronze casting. This bust, unveiled outside the Madeira airport that bears Ronaldo's name, has since been replaced with a better but blander version. 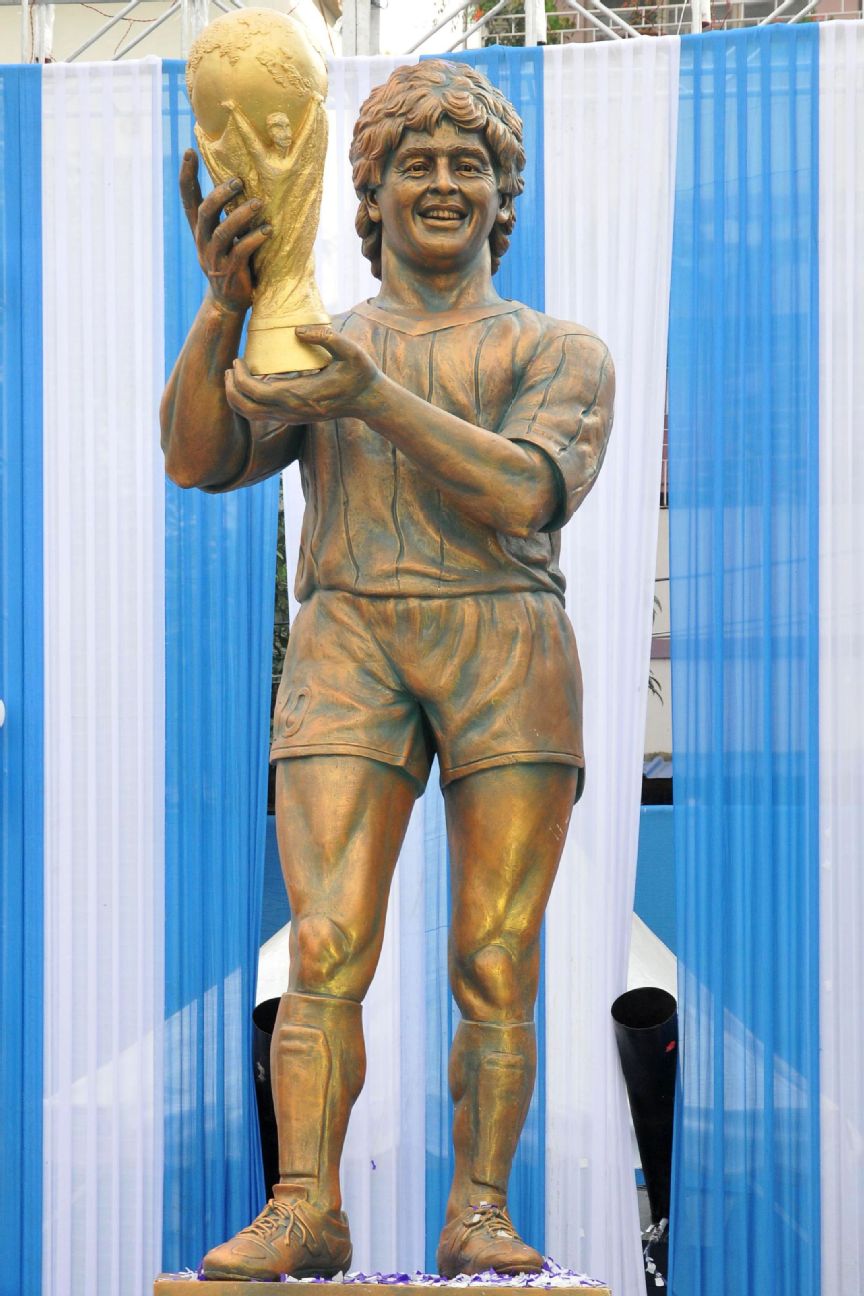 The sculptor of this work in Kolkata, India appears to have used a photograph of Bobby Ewing from "Dallas" as his reference, rather than El Diego. 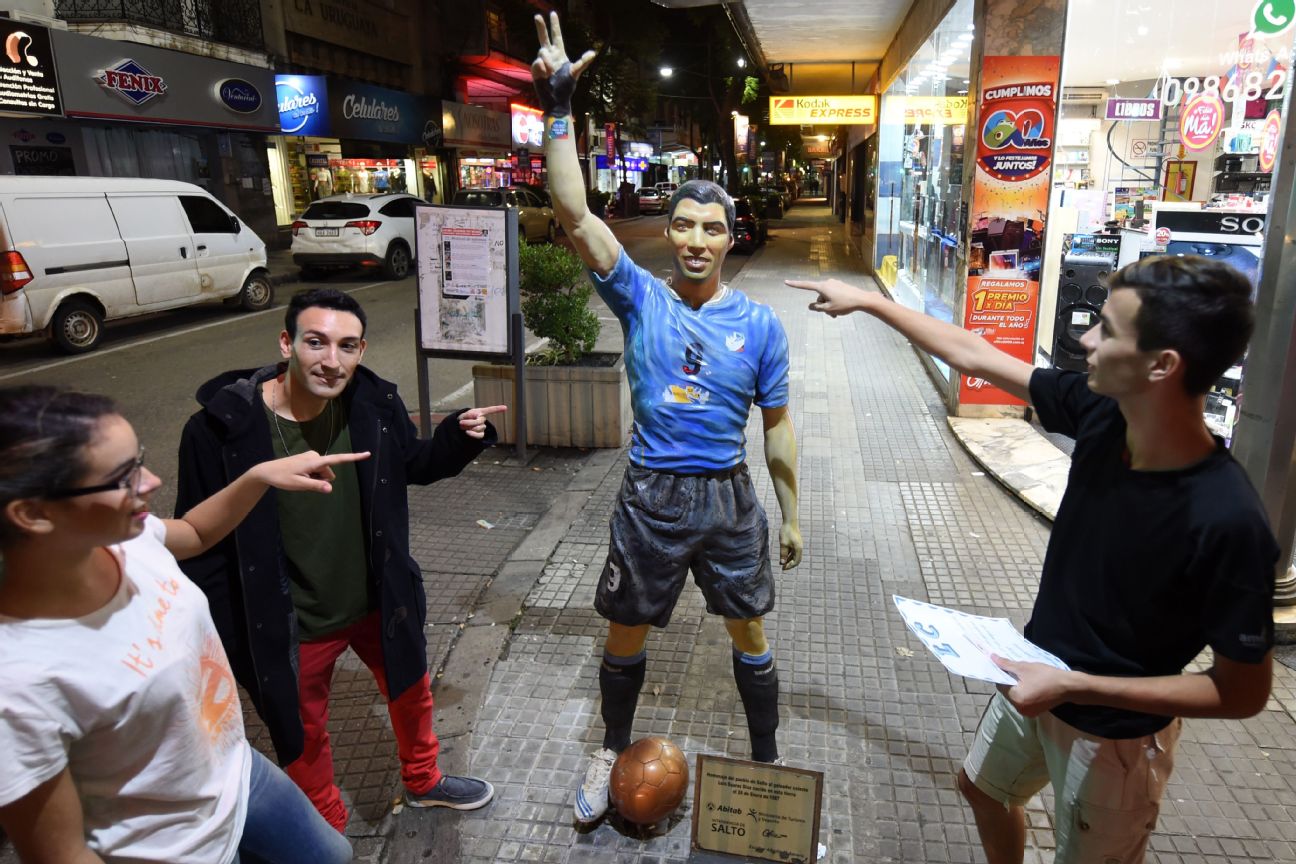 Located outside an office supply store on an unassuming street corner in the Uruguayan city of Salto, this dumpy statue of hometown boy Suarez is made all the more amusing by the fact that it's slightly smaller than lifesize.

A new statue of Mohamed Salah is causing a storm on social media: https://t.co/ikiWZrWSLC pic.twitter.com/VKhS9fbYdv

The people of Albacete were understandably concerned when it was proposed that a naked statue of their most famous footballing son was soon to go on display there.

Thankfully, they were relieved to discover that the troubling images were of an early mock-up and a tiny pair of shorts had been added to the final statue.

Located at Nike's headquarters in Oregon, it is still yet to be explained why the artist responsible for this large statue of Brazil great Ronaldo saw fit to use somebody else's face entirely.

A giant 19-foot statue of Radamel Falcao is being built in the Colombian's home town. 😳🇨🇴 pic.twitter.com/imRZ6X6D3f

Back in 2018, Falcao was the recipient of a 19-foot tall salute from his hometown in Colombia.

However, it soon became apparent that the people of Santa Marta have completely forgotten what the superstar striker looks like since he's been gone. 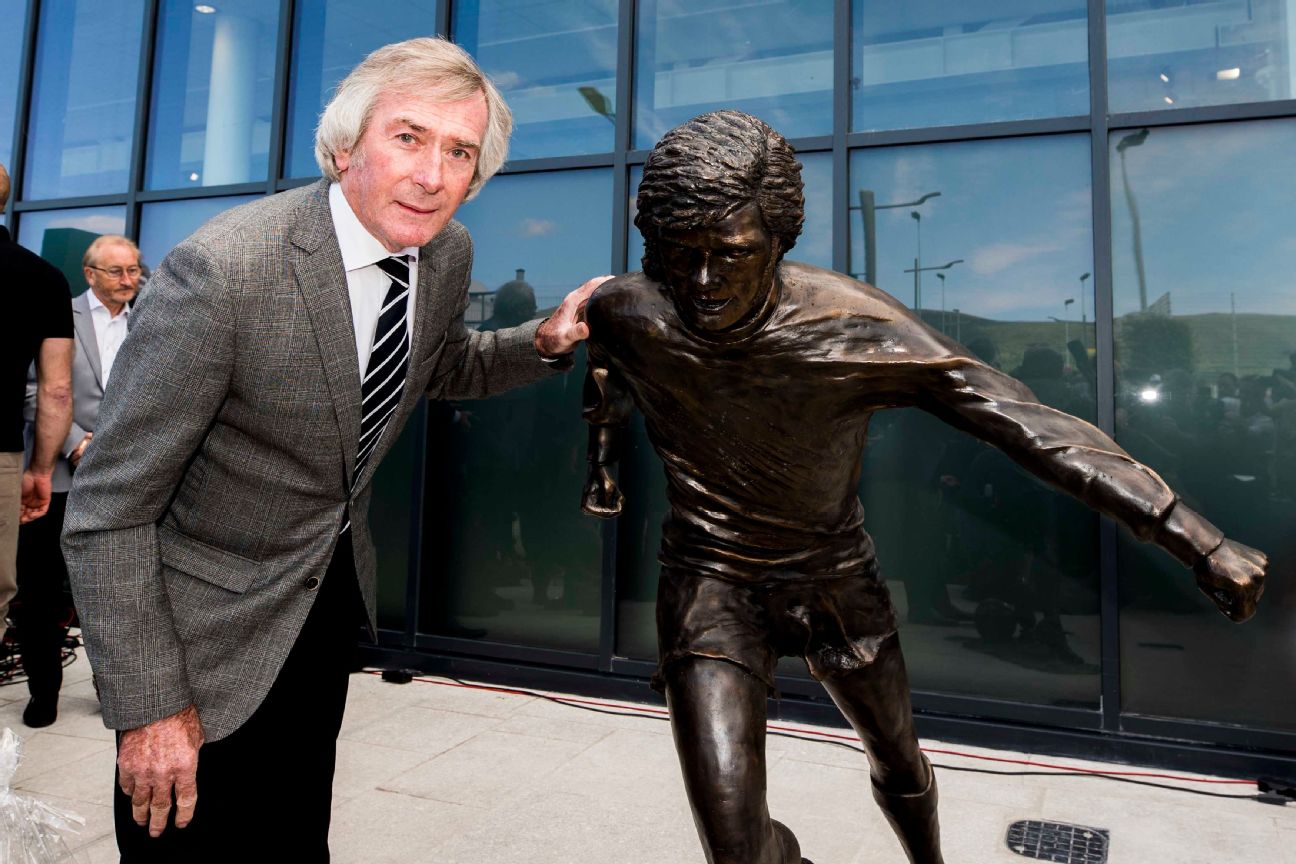 Pat Jennings did his best to look enthused while unveiling this tribute to his former Northern Ireland teammate outside Windsor Park in 2019.

Alas, the features which made Best football's first global heartthrob in the 1960s were unsuccessfully recreated in statue form.

Michael Essien becomes the latest footballer to be immortalised as a dodgy statue: https://t.co/8hmuGCuXPW

The streets of Kumasi in Ghana have been adorned with some truly bizarre statues in recent years, with the same artist responsible for producing this pair of strange angular, cyborg-like homages to former Chelsea midfielder Essien and his Black Stars international teammate, Asamoah Gyan.

On the subject of statues - & in a bid to avoid talking about 🇪🇺 - let's remember the worst statue ever. This is supposed to be Ted Bates... pic.twitter.com/IZApfHMfqg

Quite possibly the most infamous statue in football, Southampton unveiled this poorly proportioned homage to their former player, manager, director and club president back in 2007.

Unfortunately, it drew so much scorn from fans that the Saints eventually had to pay double to have it replaced the following year.