VAR causes controversy every week in the Premier League, but how are decisions made and are they correct?

After each weekend, we take a look the most high-profile incidents and examine the process both in terms of VAR protocol and the Laws of the Game.

With only six fixtures this weekend, due to the FA Cup semifinals, there were fewer talking points -- but still a few to discuss.

What happened: The score was 0-0 in the 27th minute when Tottenham Hotspur forward Dejan Kulusevski tussled with Brighton & Hove Albion defender Marc Cucurella. As the pair separated, Kulusevski appeared to throw an elbow into the chest of his opponent without making contact. The referee, Craig Pawson, issued the Spurs player with a yellow card.

VAR decision: The VAR, Lee Mason, decided it wasn't a clear and obvious error by the referee to only show the yellow card, therefore he did not advise it should be upgraded to red. 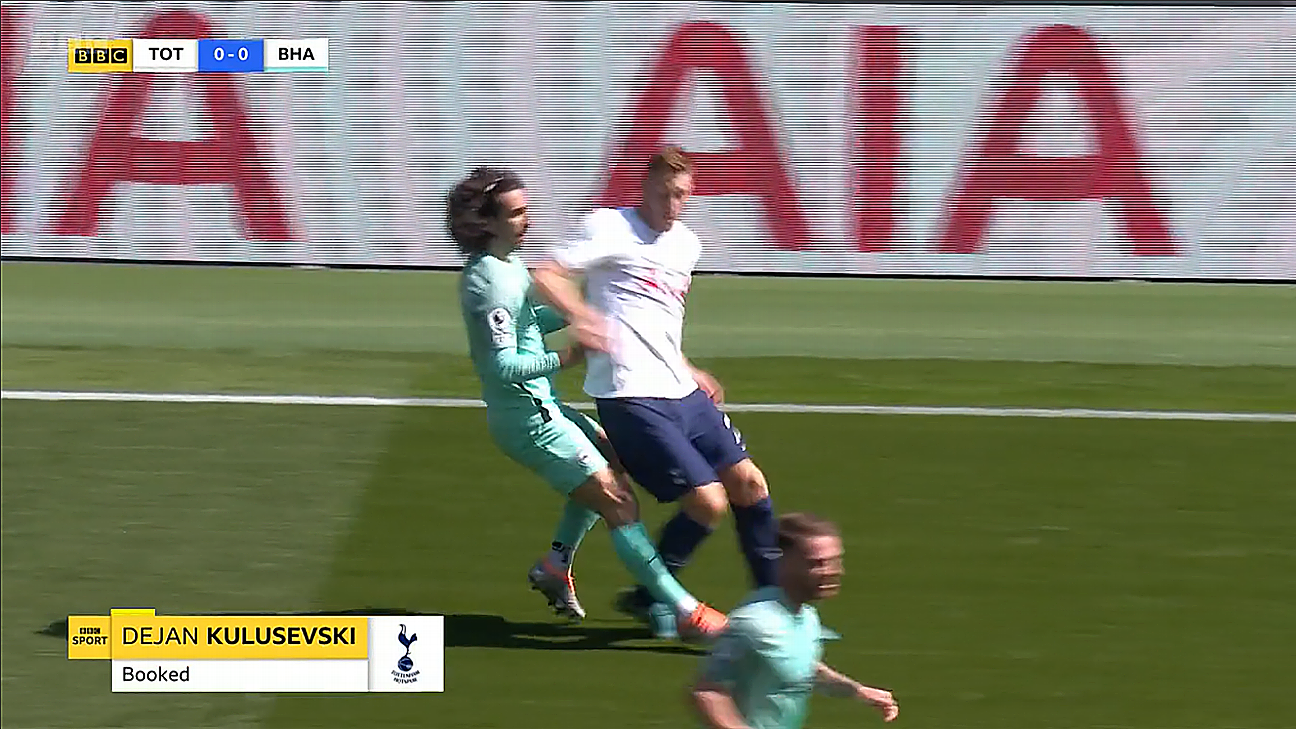 VAR process: One of the cornerstones of the VAR process is that the VAR should not intervene if the referee's decision (in this case, a caution) could be considered as an acceptable outcome. Also, as there is a higher threshold for VAR intervention in the Premier League, it means there is less chance of a yellow card being upgraded to red if the referee has seen the incident.

VAR review: We have had a number similar incidents to this, such as Sadio Mane for Liverpool against Chelsea and Kai Havertz for Chelsea against Newcastle. In both cases, the players could be judged to have gone into the challenges too strongly with their arms and be shown a red card. As with Kulusevski, a yellow was shown and not judged to be an error.

Certainly in the Kulusevski example, if referee Pawson had shown the red card it would not have been overturned. The Sweden international threw his elbow back and while he made minimal contact, it could still be judged as violent conduct.

Several former referees believe this should have been a red card, but with VAR there is a difference between what subjectively could be a red card and what the VAR will judge to be a clear and obvious error. Would the outcome have been different had Kulusevski made greater contact with his opponent? That's probably the case, even though in law there doesn't need to be contact for a player to be sent off.

What happened: Leicester were 1-0 up in the 30th minute when Newcastle United's Bruno Guimaraes had a goal disallowed for a foul on Leicester City goalkeeper Kasper Schmeichel.

VAR decision: The goal was allowed, with Schmeichel judged not to have control of the ball when it was kicked by Guimaraes. 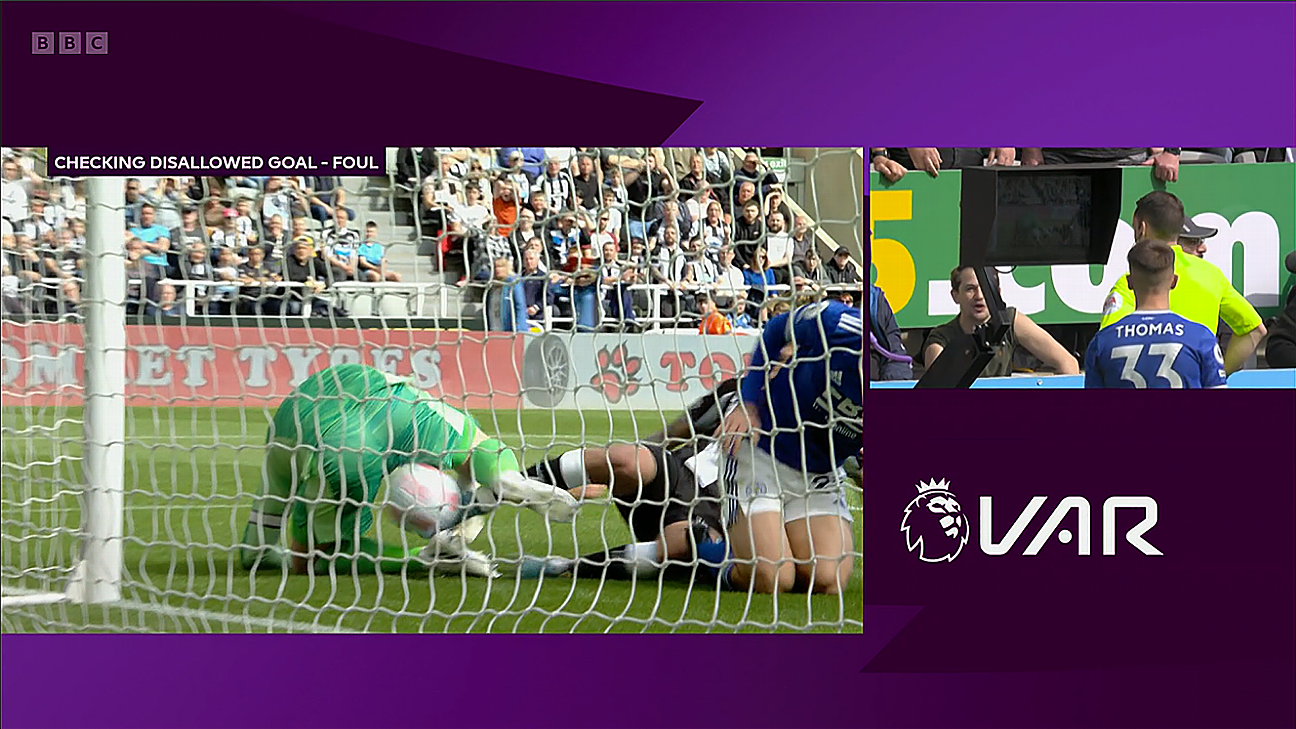 VAR review: A simple decision for the VAR, who again was Lee Mason. The referee, Jarred Gillett, believed the goalkeeper had the ball within his hands and thus under his control.

However, the VAR replays clearly showed that the ball was loose as Guimaraes kicked it through the goalkeeper's legs. Correct decision to award the goal.

What happened: Watford thought they had scored to make it 1-1 against Brentford, only for the linesman to raise his flag against Ismaila Sarr, who had flicked the ball on to Emmanuel Dennis to score.

VAR decision: The goal was allowed after Sarr was judged to be onside by the VAR, Graham Scott. 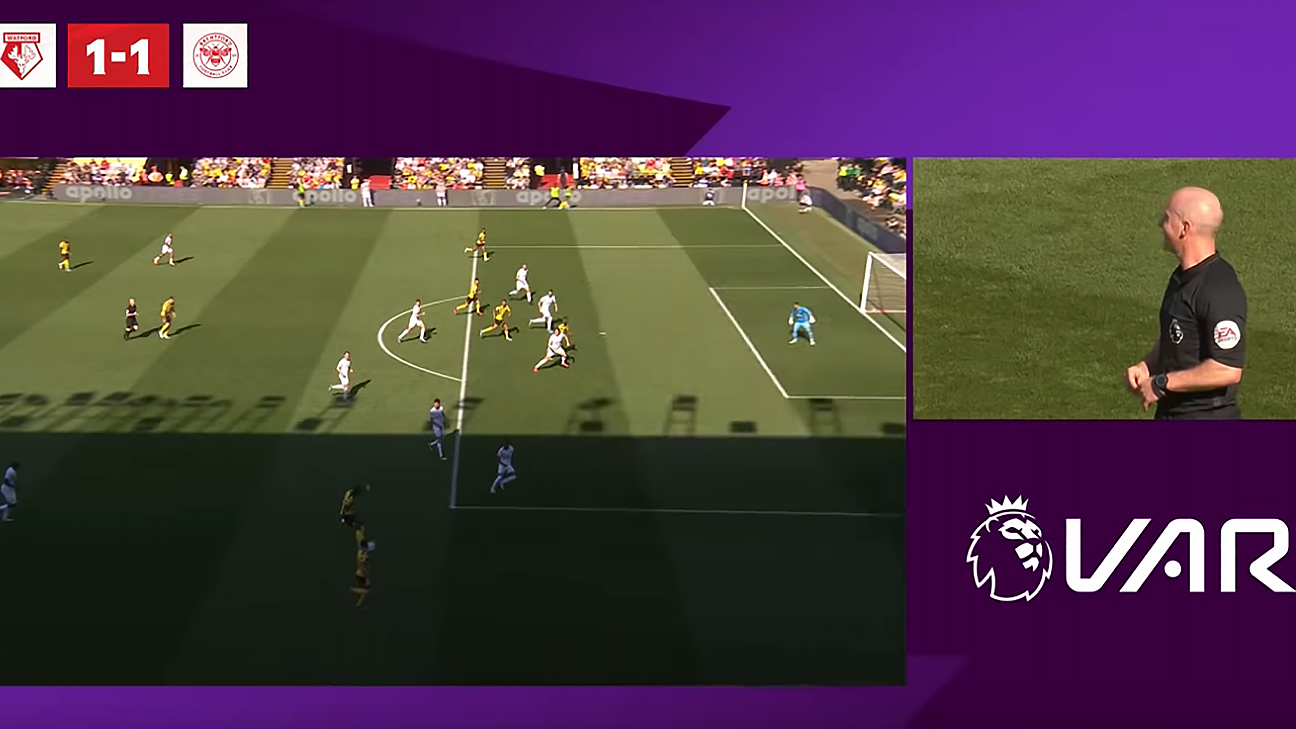 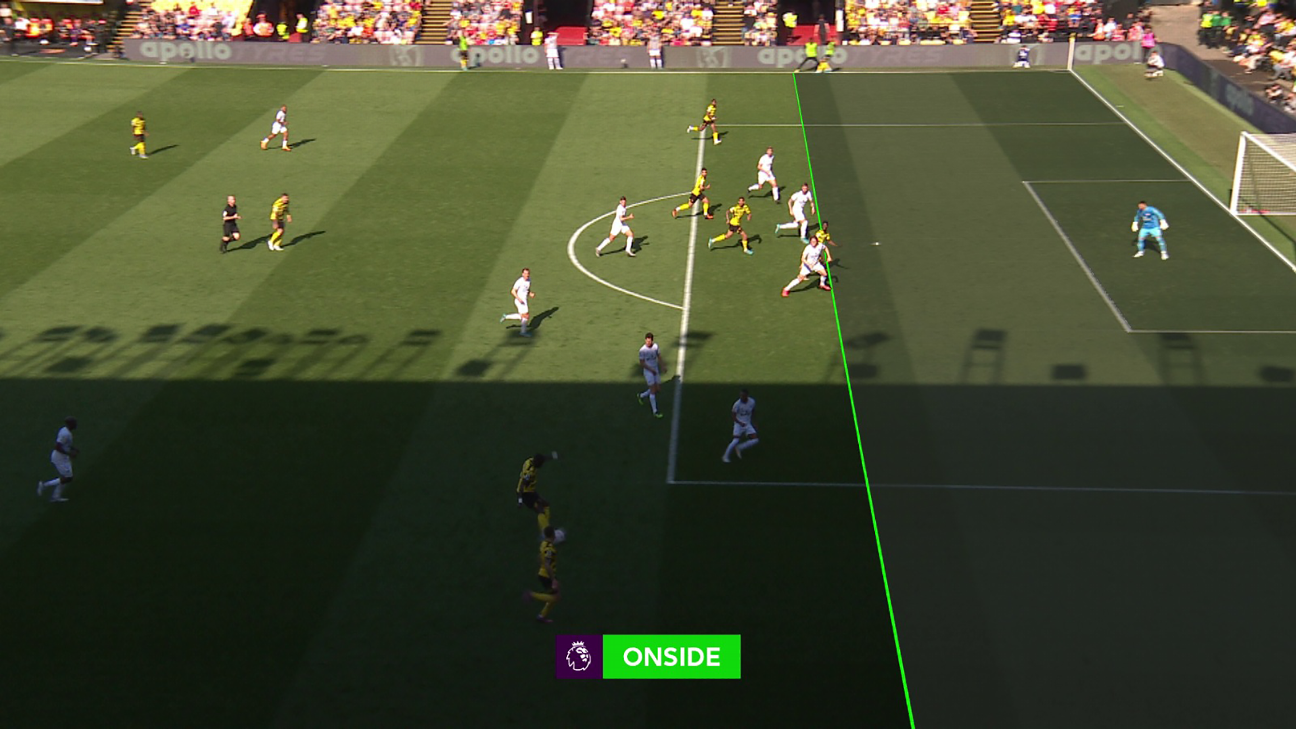 VAR process: On offside, the VAR will always go with the result of the technology, provided by Hawk-Eye. The technology is mapped to each pitch individually and calibrated at the start of each game, so the process of working out the position of players is preset. The VAR has to select the farthest forward part of the attacker and defender, but the technology does the rest.

VAR review: This is a classic VAR decision that looks like it should be offside, but the technology tells the VAR it's onside. The human eye cannot calculate the exact position of the two players relative to each other from a 2D image, which is the whole point of the technology. It means an attacker may look offside (or indeed onside), but once the tech takes into account the camera angle, the actual decision may be different.

In this decision, the end of the defender's foot is essentially level with the upper arm of Sarr.

Sarr would have been offside under the old method of VAR offside. However, from the start of this season a tolerance level, or benefit of the doubt, was added -- taking into account potential inaccuracies in the system -- to judge a player onside if they are effectively "level." With this tolerance level, if the offside lines for attacker and defender touch, then the decision is onside.

This was brought in to remove marginal offside decisions like Patrick Bamford for Leeds United at Crystal Palace last season, when he was offside because he was pointing where he wanted the ball to be played. Like Sarr, this goal would be on the edge of the tolerance level but would not be ruled out this season. 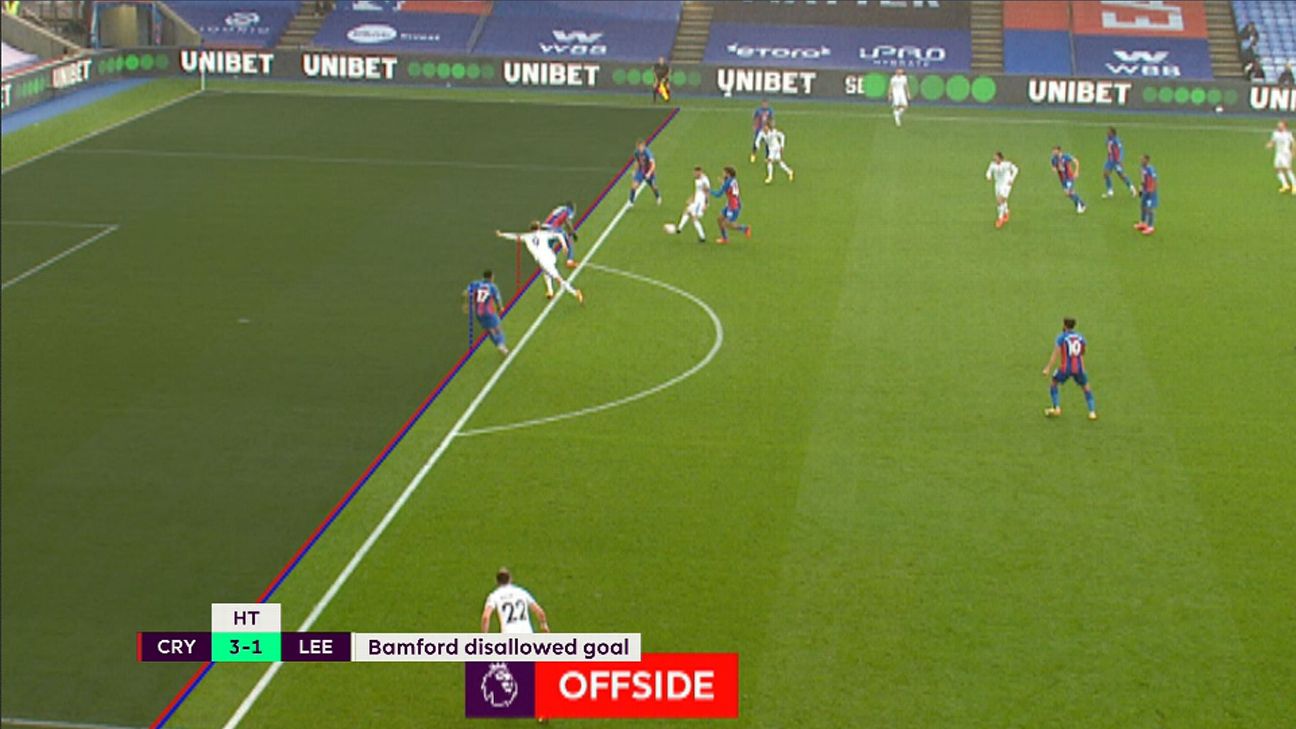 One problem this season is the final image: When it's so marginal, only the line for the defender is displayed, shown in green. It's felt that showing both lines would be confusing, as they would essentially sit on top of each other. Many supporters don't like that this, as they want to see the attacker's line too for clarity.

With the Watford onside decision, the green defensive line is drawn to the boot of the defender. It looks like Sarr is leaning over the line, but this is just a trick of the camera perspective. His body isn't going through the green line, because the green line is on the grass and not going through the air. When the lines were plotted to Sarr, his upper arm was shown to be within the tolerance level for onside.

It's a decision that definitely confuses fans, but will be much better when the new semi-automated offside with improved visualisation arrives for the World Cup in November, and all domestic leagues in 2023-24.

I've told you all about this for a long time, now see it in action.

Semi-automated VAR has take off at the Club World Cup.

It's a vast improvement with:
- Quick decision-making
- Superior Hawk-Eye visualisation

There was a similar situation with Teemu Pukki's goal for Norwich at Manchester United. Here, the decision on the pitch was onside, upheld by the technology. It was close, however, as shown by the use of only the single green line to the defender. 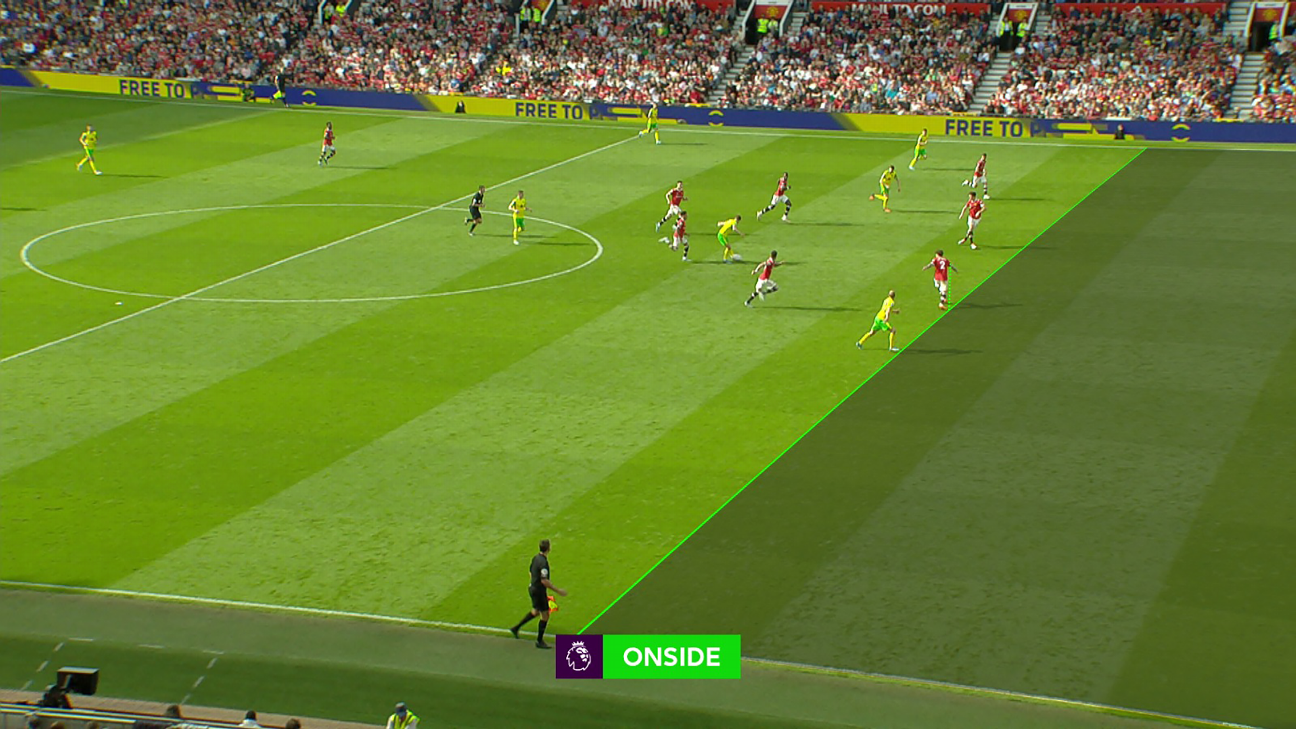