The winter transfer window is closed, but now it's time to look ahead to the summer! Here are the new rumours floating around Europe's big leagues and beyond.

Inter Milan defender Diego Godin is set to swap life at the San Siro for a stint in the Premier League, reports Tuttosport.

The 34-year-old veteran made the jump over to Milan from Atletico Madrid last summer, but since then, he hasn't been able to find a consistent spot in their starting XI. With that being the case, the door is now open for top clubs around the world to act on their interest.

Tottenham and Manchester United are at the top of that list, with Godin expected to land at one of the two in the next few months.

22.32 BST: Manchester City are monitoring 17-year-old Ajax forward Sontje Hansen, who won the Golden Boot at last year's Under-17 World Cup, according to the Guardian. And with the Dutch youth international having just a year remaining on his contract in Amsterdam, Pep Guardiola's side could get him for a meagre £6m.

21.15 BST: Corriere dello Sport writes that Roma's lack of Champions League football and the economic crisis caused by the coronavirus pandemic has put the club in a period of financial suffering, and will now look to cut €40m from their wage bill by offloading (by any means necessary) the likes of Javier Pastore, Steven Nzonzi, Maxime Gonalons, Rick Karsdorp, Robin Olsen, Diego Perotti, Federico Fazio and Juan Jesus.

19.58 BST: Juventus believe that Fiorentina attacker Federico Chiesa could be one of the pillars of the club's rejuvenation project, and according to Corriere dello Sport, are in "continuous" communication with the 22-year-old Italy international.

18.41 BST: Sky Sports reports that Manchester United and Manchester City are both interested in RB Leipzig centre-back Dayot Upamecano, and cites Sky Germany as reporting that Bayern Munich "and the major clubs in Spain" are similarly intrigued by the France U21 international.

17.24 BST: Would Harry Kane be a good addition to Manchester United's squad? Our Gab Marcotti thinks so, but even at £200m?

The Athletic says that they have targeted Torres if their move for Jadon Sancho doesn't materialise. Torres has a €100m release clause but Valencia could sell the 20-year-old in the summer for around €50m as his contract expires in 2021.

15.30 BST: Subliminal suggestions that Borussia Dortmund's Jadon Sancho is on his way to Man United.

14.50 BST: Lyon president Jean-Michel Aulas says he hopes that Memphis Depay will stay with Lyon beyond this season -- whenever it ends.

The Netherlands international was in a race against time to return to fitness ahead of Euro 2020 before the coronavirus outbreak put world football on pause.

Now with no Euro 2020 for Depay to rush back for, the 26-year-old can recover in his own time and Aulas appeared to open the door to a contract extension.

"I really hope that he stays with OL for a long time," said Aulas in reply to the #MemphisStayInLyon campaign. "I really do everything for that. Memphis knows what I do it for. I trust Memphis."

The former Manchester and PSV winger is under contract at Groupama Stadium until the summer of 2021.

14.12 BST: Roma are keen to sign Manchester United defender Chris Smalling once his loan expires in the summer, but talks over the fee may scupper the deal, says the Athletic.

Smalling, 30, impressed in Serie A before football was cancelled due to the coronavirus outbreak but United want €25m for him and Roma won't go that high.

Meanwhile, they're also unwilling to pay £22m to Arsenal to land Henrikh Mkhitaryan at the end of his loan. The Daily Mail says that the Gunners want to get rid of the Armenia international and could just sanction another loan to Italy.

13.43 BST: Porto and Mexico ace Jesus "Tecatito" Corona has been linked to Inter Milan by Corriere dello Sport. His agent was quoted as saying Corona wants to win the league with Porto and then think about his future. Roma, Sevilla, Everton, West Ham and Schalke are also in the mix, according to the report.

12.49 BST: According to L'Equipe, Tanguy Ndombele is considering his Tottenham future after his bizarre recent episode with manager Jose Mourinho.

L'Equipe reckons that Mourinho is keen to mend his damaged relationship with the France international after a number of criticisms since he replaced Mauricio Pochettino last November.

The report says that Ndombele, privately, is not hiding that he cannot go through another year of similar turbulence. Barcelona and Real Madrid are keen, despite the reduced interest for expensive moves due to the coronavirus pandemic.

12.04 BST: There's trouble brewing at Barcelona over the future of Lionel Messi.

11.19 BST: Ivan Rakitic has said he's not a "sack of potatoes" that Barcelona can do whatever they want with, and stressed his desire to finish the contract he has with the club, which runs until 2021.

Sources have told ESPN that Rakitic is one of the players Barca want to cash in on this summer. The Spanish champions had already planned a fire sale to fund moves for Neymar and Lautaro Martinez, but the expected financial repercussions of the coronavirus pandemic will accelerate the need to bring money in.

11.05 BST: Harry Kane will remain on Manchester United's transfer shortlist despite Tottenham's stance that they will not sell their star striker to a domestic rival, sources have told ESPN.

United boss Ole Gunnar Solskjaer is keen to add a centre forward to his squad during the next transfer window and Kane is on the list of potential targets narrowed down by the club's recruitment team.

10.52 BST: Tanguy Ndombele is considering his Tottenham Hotspur future after his bizarre recent episode with Jose Mourinho, according to L'Equipe.

The Portuguese coach contravened UK coronavirus guidelines on social distancing by hosting an impromptu training session with Ndombele, Davinson Sanchez and Ryan Sessegnon, for which he later apologising in an official statement.

L'Equipe claims that Mourinho is keen to mend his damaged relationship with the France international after a number of criticisms since he replaced Mauricio Pochettino last November.

Ndombele, privately, is not hiding that he cannot go through another year of similar turbulence with Barcelona reportedly keen -- despite the reduced interest on the transfer market for expensive moves due to the Covid-19 pandemic.

10.32 BST: Real Madrid coach Zinedine Zidane is keen to bring in an alternative to Casemiro, reports Diario AS, with Eduardo Camavinga, N'Golo Kante and Boubakary Soumare all potential targets.

Casemiro is the only natural defensive midfielder at Zidane's disposal, with neither Fede Valverde nor Toni Kroos feeling comfortable in the role.

The Brazilian has played the most minutes of any Real Madrid player this season.

AS claims that three French options -- 17-year-old Camavinga of Rennes, Chelsea's Kante and Lille's Soumare -- are all being examined at the Bernabeu.

The newspaper admits there will be serious competition for Camavinga's signature, while Kante's high salary and Chelsea contract until 2023 would be major obstacles to a move. 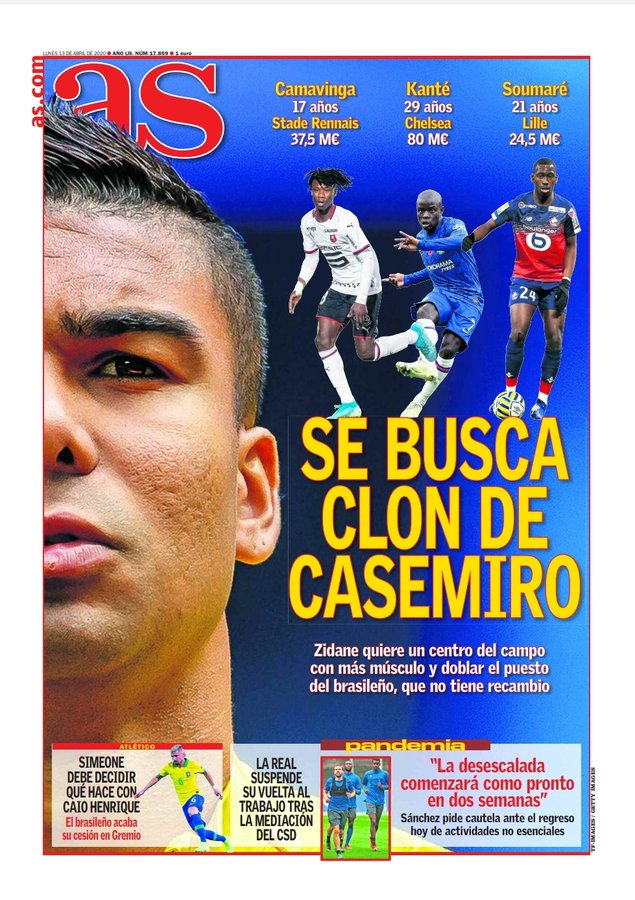 09.56 BST: Lyon president Jean-Michel Aulas hopes that Memphis Depay will stay with Lyon beyond this season -- whenever it ends.

The Netherlands international was in a race against time to return to fitness ahead of Euro 2020 before the Coronavirus put world football on pause.

Now with no Euro for Depay to rush back for, the 26-year-old can recover in his own time and Aulas appeared to open the door to a contract extension.

"I really hope that he stays with OL for a long time," Aulas said on Twitter. "I really do everything for that. Memphis knows what I do it for. I trust Memphis."

Depay is currently under contract at Groupama Stadium until the summer of 2021.

09.27 BST: Tottenham Hotspur will block any approach from Manchester United for star striker Harry Kane, according to several UK-based outlets.

Over the weekend, the Mail reported that England captain Kane would be open to a move to Old Trafford and that Spurs chairman Daniel Levy would sanction a £200m sale.

However the BBC, The Times and Sky all report that Tottenham are maintaining their stance of keeping hold of their prize asset no matter what offers they receive.

Kane, 26, is committed to the club where he graduated through the youth ranks until 2024, having signed a six-year deal in 2018.

08.43 BST: Achraf Hakimi has said he's yet to discuss his Real Madrid future amid interest from a number of top clubs in the on-loan Borussia Dortmund player.

The 21-year-old full back is due to return to the Bernabeu in June when his two-year Bundesliga loan spell ends.

"My agent looks after it, I'm not really focused on it," he told El Larguero when asked whether his contract expires in 2022. "I think it's around there but I don't know exactly how many years I have left. There's been no change."

Hakimi has been linked to the Premier League with reported interest from Chelsea, Arsenal and Tottenham, as well as Paris Saint-Germain and Juventus.

"Who wouldn't like to have various offers and teams interested in him?" he said. "I'm proud of what I'm doing and I'm really happy. In June I'll have to take a decision and it will be a big step in my career. I haven't had contact (with Real Madrid) about it... soon we'll have to have a conversation about what's best for me."

08.00 BST: Odion Ighalo has said he is unsure about his future at Manchester United despite impressing since moving to Old Trafford on loan in January from Shanghai Shenhua, scoring four goals in eight appearances.

"You know I have a loan deal until the end of the season," the Nigeria international striker told journalist Juliet Bawuah in an interview on Twitter. "Now it is for us to finish the season well, for me to do well and score goals.

"But even me as a person cannot start talking about a contract when you don't know when you're going to resume. I've been around the club for a few months and everything is working perfectly well for me and the team is going fantastically. We'll see how it goes."

Juventus are interested in signing a top new striker, Calciomercato reports, with Man City's Gabriel Jesus and Mauro Icardi, who is on loan at PSG from Inter, at the top of the Old Lady's list.

The Italian champions are considered to be one of the best sides in European football, but even with that being the case, they're still clearly invested in the idea of signing a new goal scorer.

The future of Gonzalo Higuain is unknown, and with Cristiano Ronaldo wanting a younger strike partner, the two names that have been mentioned are Icardi and Jesus.

Alas, Juve first need to wait to see whether or not the summer transfer window will even take place as the world deals with the ongoing coronavirus pandemic.

- Stream new episodes of ESPN FC weekdays on ESPN+
- Stream every episode of 30 for 30: Soccer Stories on ESPN+

As many as four major Paris Saint-Germain first-team players could end up leaving the club this summer, Marca reports.

Thiago Silva and Edinson Cavani are all but guaranteed to be making their way out of the French capital in the next few months, with some reports suggesting that they may never play for PSG again with games on hold across the globe.

Layvin Kurzawa and Angel Di Maria have also been mentioned as potential departures, and Neymar and Kylian Mbappe are also constant sources of speculation.

- Juventus could be willing to sacrifice Juan Cuadrado as part of a deal to bring Inter Milan star Icardi to Turin, Calciomercato reports. The popular Colombian full-back has been with Juve on a permanent basis since 2017.

- Newcastle are gearing up to submit a £30m bid for Aston Villa star John McGinn if Villa are relegated from the Premier League, the Daily Star reports. McGinn, who is widely considered to be one of Villa's best players, would reunite with Steve Bruce -- the man who first brought him into the mix at Villa Park.