For the past 18 seasons, the Utah Jazz has been a model of consistency.

Behind Karl Malone, John Stockton and Jerry Sloan, the Jazz has been the NBA's metronome, its sunrise, exhibiting professionalism and talent at the same time, making the playoffs every season, going to the Finals twice, placing the Wasatch Mountains on the world map.

Now, with both of those future Hall of Famers gone, the Jazz is going to continue its consistency.

It is going to be consistently bad.

And I don't mean like Los Angeles Clippers bad. I mean like the nine-win Philadelphia 76ers bad.

Don't look now, but the upcoming season's version of the Jazz could be the worst team in NBA history.

There is a spot above the University of Utah, at the mouth of Emigration Canyon, overlooking the entire valley, called "This is the place." It purportedly is where Brigham Young came out of an arduous trek, took in the beauty of the valley and proclaimed, "This is the place," and that is how Salt Lake City and the home of the Church of the Latter Day Saints was born.

The city may very well have to erect a new but similar spot, in downtown Salt Lake, next to the Delta Center, where future generations can proclaim, "This is the other place."

"Son, the place where the worst team in professional basketball history played its games, the place where that great proud warrior Jerry Sloan suffered a coronary in the middle of a contest after watching a fellow named Greg Ostertag throw up his 11th airball in a quarter, the place where a once-triumphant franchise fell into irrevocable disrepair."

"Oh," Johnny will say, forlornly, wondering why a fellow named Greg Ostertag would be permitted to take 11 shots in a quarter.

All summer long we have waited for the Jazz to make a move -- any move -- to improve the team, to carry on the tradition of greatness that Stockton and Malone have made the rabid constituency of fans come to expect.

Instead, the Jazz made a half-hearted attempt at signing Jason Terry -- which, in my mind, turned out for the best (assuming the Atlanta Hawks match the offer), kind of like the Minnesota Timberwolves being let off the hook for what was going to be an $86 million blunder to Joe Smith for which they still would be paying.

As it stands, the only thing the Jazz has done this summer is take Keon Clark off the hands of the Sacramento Kings because the Kings could not afford to pay him. In essence, the Jazz walked down an alley and received a handout.

Currently, the Jazz has a grand total of $29 million committed to salaries, and it still is almost $13 million under the salary cap. Enough room to make another move, you say? Wrong. The Jazz do not have to get to the NBA's minimum salary of $32 million until the END of the season, not before the season starts. So theoretically they can sit right where they are until April.

And, really, who could blame them? It's kind of like pulling the goalie in hockey -- if you are going to be bad, you might as well be REALLY bad, rather than middling bad. Why give some guy $5 million to give you 11 wins rather than eight, when ultimately that $5 million could go into the coffers?

Realistically, what the Jazz is probably going to do is sit tight until the trade deadline, and then when teams are going to try to dump salary the Jazz may be there to acquire both talent and future picks.

For instance, say the Hawks want to rid themselves of Shareef Abdur-Rahim to get further under the salary cap. The Jazz either could simply agree to take Abdur-Rahim, or they can tell the Hawks they will take him off their hands if they also include a future first-round pick. It at least would give them a base from which to work for the future. 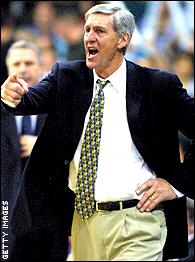 Which is more than they have right now. Not only is the cupboard bare, but it is falling off the wall.

Many of us thought the Denver Nuggets were going to reach the Sixers' level of infamy last season, and they ended up with 17 victories. But while they were bad, they at least had an anchor in Juwan Howard.

Howard was a player who commanded a double-team, who was consistent -- someone the team could go to if it absolutely needed a basket. Plus, Nene Hilario ended up being a gem.

With the Jazz, if you can believe it, Ostertag is going to be the highest-paid player on the team, with a salary of $8.66 million. The last time he commanded a double-team was in the fourth grade.

Virtually everybody on the team is a complementary player. Matt Harpring, while skilled, did so well last season because he was playing off of Stockton and Malone and benefitted from the attention they demanded.

Clark is decent, but not as a go-to guy and not as the primary offensive weapon. Andrei Kirilenko is a fantastic athlete, but, again, that is next to Malone and Stockton, who may end up being more appreciated in their absence than they ever were when they wearing a Jazz uniform, much the same way all those players who passed through Chicago looked terribly average once they stopped playing with Michael Jordan.

As it stands, the Jazz is going to have a projected starting lineup of Ostertag at center, Clark at power forward, Kirilenko at small forward, Harpring at
shooting guard and Carlos Arroyo or DeShawn Stevenson at point guard. Jarron Collins and a host of who-is-that? players will come off the bench.

The answer to the latter is Sloan, who must be a true glutton for punishment. You have to wonder why such a proud man would put himself through such misery at a time he could have retired an icon.

I honestly don't know how he is going to get through it. At least in the past 18 years, when he yelled and screamed at players, he always had Malone and Stockton to set the tone and reinforce his message.

Without those two legends around, I wonder how long it will take before today's respect-me NBA players get weary of hearing Sloan's old-school rants and something drastic has to happen to alleviate the pressure. If nothing else, it will give us something to watch other than the Jazz's pursuit of eight wins -- or less.

Frank Hughes, who covers the NBA for the Tacoma (Wash.) News-Tribune, is a regular contributor to ESPN.com.