Just after July 31, when the Minnesota Twins' front office switched philosophies at the deadline, changing from buyers to sellers, the team’s manager, Hall of Famer Paul Molitor, didn’t flinch.

There was some dissension in his locker room. One moment, the Twins were adding a veteran starter, Jaime Garcia, in a go-for-it, wild-card move for a small-market franchise. The next, the front office signaled to the team’s veterans: never mind.

After one start, Garcia was jettisoned to the New York Yankees, and in a deal that cut deeper inside the Twins’ clubhouse, the team’s closer, All-Star Brandon Kintzler, was sent to Washington. 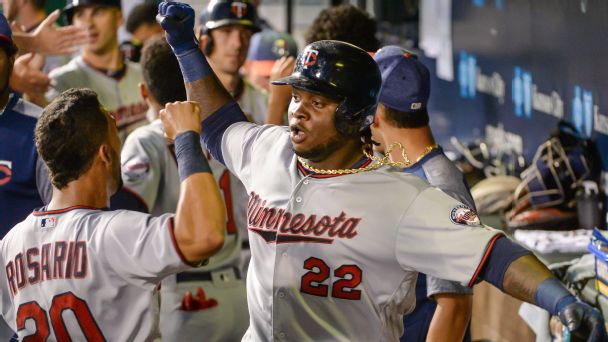 Molitor took the opportunity to lead, making sure the sudden subtractions did not sabotage the rest of the season.

“I said that, ‘People who make those decisions have a job to do, and they are going to make those decisions in what they feel is in the best interest in our team, both short-term and long-term. It is not our place to question it,'" Molitor said of his address to his club. '"Anytime as a player, when we lose someone or something happens, the best course of action is to look at what you could’ve done differently to prevent it from happening. Don’t look outward. It is a good time to take a little inventory.'"

The players took that to heart and participated in a meeting of their own with a clear message.

“It was just a, ‘Everyone is counting us out,’” outfielder Robbie Grossman said. “'No one expects us to be here. Let’s see what we can do.'”

What they did was make the playoffs. Although they won't win 90 games, it doesn’t matter. The Twins are going to the playoffs, led by Molitor, with an emergence of youth, some veteran leaders and a steely resolve born from their devastating starts the previous two seasons. They are the first team to lose 100 games one season and make the playoffs the next.

Here's everything you need to know about Houston's win over L.A.

Their story is one of resolve and a little luck.

The American League is filled with mediocrity, and the Twins are in the postseason to a large degree because of that. But if they beat the Yankees in the Bronx on AL Wild Card Tuesday, they will stand on the same ground as the other seven teams remaining as the weather cools in October.

When the Twins made the trade for Garcia on July 24, they were 49-49 and two games out of the second wild card. Garcia won his start with Minnesota, but the Twins lost all four of their other games before he was shipped out. With the team suddenly five games back in the wild card, Kintzler was gone, too.

“At the time, I would say disappointed is a good word,” said the Twins’ slugging second baseman and one of the team's leaders, Brian Dozier.

But Dozier and the Twins have felt worse. In 2015, the Twins started 1-5, which was just enough of hole to prevent them from being in the wild card. In 2016, it was even worse, as an 0-9 start made it feel like the season was over before it began. It essentially was, but there were a total of 103 losses to suffer through.

“It depletes you,” Dozier said.

Dozier is an “everything happens for a reason” type, so in retrospect, he sees the good, as the current group’s toughness is derived in part from those harsh beginnings. The roster turnover has not been that immense. Instead, the Byron Buxtons and Eddie Rosarios are developing into stars. A lot of the names are the same, but the team is not.

“This is a totally different team,” Dozier said of the 103-loss season last year. “Even though it is a lot of the same guys, most of the same guys, it just feels like 23-, 24-, 25-year-olds, they are not 23 anymore. Even though it is a year difference, so many guys grew up 10 years. It is a totally different mindset. The maturity level is off the charts of what it used to be. For us older guys, it made us into better leaders.”

In the winter, Molitor survived the residue of the 103 losses, and the Twins brought in 34-year-old Derek Falvey, who hired Thad Levine as his GM, to run baseball operations. In 2015, Molitor had Torii Hunter as a leader in his clubhouse. In 2016, he thought the team needed more to complement Dozier and Joe Mauer.

“Joe has always been a really good, quiet leader,” Molitor said. “Dozier emerged. Part of my first conversation with Derek and Thad, under their leadership, was if we could get some veteran, high-character people who could still perform, it would be a big influence on young players."

“They’ve helped create a confident group of kids,” Molitor said. “I give them a lot of credit to do that. We have asked them to do it. They have done it.”

Now they're in the postseason.