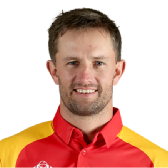 Regis Chakabva provided the innings' early impetus, Craig Ervine hit 91 and put on 106 with Sean Williams, and Sikandar Raza struck a half-century late in the piece to get Zimbabwe to 302 for 7. But the visiting bowlers had to hold their nerve too. In the face of a Dasun Shanaka hundred, which threatened to turn the game after Sri Lanka's terrible start, Blessing Muzarabani and Richard Ngarava bowled exceptional final spells to suck the oxygen out of Sri Lanka's desperate chase, eventually sealing a 22-run win that leveled the series.

Earlier in Sri Lanka's innings, Zimbabwe's seamers had struck perhaps the most decisive blows of the match. Tendai Chatara bowled Kusal Mendis in the fifth over, Muzarabani then had Pathum Nissanka caught behind for 16, before having Dinesh Chandimal out at slip in his next over. Sri Lanka were 31 for 3, then when Charith Asalanka got out, 63 for 4 in the 15th over.

That the hosts recovered was down to Shanaka, and the 118-run fourth-wicket stand he put on with Kamindu Mendis. But the required rate continued to climb right through that partnership, and although Shanaka progressed to his first international century in the company of Chamika Karunaratne, he could never quite push his team into the ascendancy. He got to triple figures with a six over deep square leg, but when he holed out to long off the next ball, with 56 still to get off 32 deliveries, Sri Lanka's chase essentially lost its last serious hope.

Sri Lanka went down by 22 runs in the end, their last wicket pair in the middle at the close. Chatara and Muzarabani shared three wickets apiece, while Ngarava and Wessley Madhevere took one each. Left-arm spinner Wellington Masakadza contributed to Zimbabwe's defence too, conceding just 34 from his eight overs.

Zimbabwe had only hit seven less in the previous ODI, on a very similar surface, and at the same ground. But this time, they took Sri Lanka by the collar by claiming early wickets.

Kusal Mendis had been dropped at third man off Muzarabani in the second over, but Chatara ensured the mistake would barely cost Zimbabwe, nipping one back off the pitch to breach his defences, for 7. Nissanka, arguably Sri Lanka's best batter in the previous ODI, was out next over, edging a teasing Muzarabani delivery behind.

When Chandimal edged Muzarabani to the slips in the eighth over, it left Sri Lanka at 31 for 3. Already the hosts' chances were dwindling. When Asalanka departed for 23, the hosts' plight appeared pretty much shot.

Kamindu Mendis and Shanaka kept the hosts alive with the biggest stand of the game. Where Kamindu was watchful, Shanaka was aggressive from very early in his innings, smoking Madhevere over midwicket for six off the sixth ball he faced, before crashing him for four through cover later in that over. Shanaka continued to find regular boundaries, particularly square of the wicket. But as briskly as he scored, it never seemed quick enough to put Sri Lanka in control, particularly as Kamindu scored at a measured pace through the course of his knock.

By the end of the 30th over, the required rate had crept up to 7.65. After the 35th, it was up to 8.06, and Kamindu had just got out. Shanaka and Karunaratne then put on 66 together, but the runs didn't come fast enough, and the partnership was not sufficiently substantial.

Zimbabwe's own innings had been, like it was on Sunday, a group project in which a middle-order left-hander took the lead. This time, it was captain Ervine that played the defining knock. He put the bad legside balls away to begin his innings, and then settled into a diet of frequent singles and twos into the outfield, rarely missing the opportunity for a risk-free run. He and Williams ensured Zimbabwe's run rate skipped along at more than 5.5 an over through the course of their big partnership, with Ervine reaching his fifty off the 56th ball he faced.

Later, Raza played a vital innings too. He hit a six off the sixth ball he faced, in the 37th over, and did not let his strike rate dip below fifty for the majority of his innings, getting to his half-century off the 41st ball he faced.

Zimbabwe had rolled up to the 40th over on 232 for 4, and Sri Lanka would perhaps reflect that from that position, they had done well to keep the opposition to 70 runs in the last 10 overs. But when Zimbabwe's quicks made those early strikes, the outlook of the the match changed dramatically.