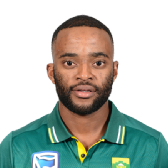 That brings South Africa's tour of Ireland to a close, with the visitors clean sweeping the T20Is 3-0 after sharing the ODI series 1-1. Not the result the hosts would have liked - especially after they failed with the bat across all three T20Is - especially with the T20 World Cup looming. But it's a goodbye from us here, while you can join the action between West Indies and Australia in Bridgetown!

Bavuma now lifts the T20I trophy, with his team-mates maintaining social distance for that.

Here's Bavuma again, this time speaking as captain: "It has gone to plan. We came here with certain goals to achieve, and we have done so. We have the opportunity to do something that hasn't been done. The World Cup is a couple of months away, so we can iron out a few things. [Back-to-back series wins for you as captain] It's been tough, I won't lie. The performances from the team point of view has been there, and I'm enjoying the responsibility."

David Miller is the Player of the Series for his excellence with the bat: "It was obviously nice to contribute. [I was] struggling in the West Indies, and a series win as well, so a bonus there. The guys make it easy off the field. [T20 World Cup plans?] Going into it to win it. [We'll take it] one game at a time, it's a pretty long competition. It's been a good time in the bubble [here], and we can now go out and see the country!"

Balbirnie, the host captain: "We haven't batted well enough in all three games. We were rusty. We've got eight or nine games leading up to the T20 World Cup. Our batting has been the strong point in T20s over the years. [On Ben White's debut] He's worked really hard to get where he is now. [15 points for the Super League from the ODIs] We played really well during that week, and it's a shame we couldn't bring that to the T20s."

Bavuma is the Player of the Match for his 73: "It was nice to hit the ball in the middle, and contribute for the team. Reeza and I play for the Lions. We know each other's strengths, I am sure he would have enjoyed as well. We tried to take our time, and lay that foundation."

Time for the presentations

tilak: "I thought Ireland were gonna be the next big sensation in world cricket. Sad that they haven't improved much after beating England in 2011.Makes me wonder if they were given test status prematurely!?"

Trundler: "The Proteas' inability to sew up a match swiftly is very worrying. They keep allowing tails to get away with some rapid runs. In a tight game this would be crucial."

7.16pm A win by 49 runs, and that rounds off the visitors' dominance in the shorter format on the tour. Their opening pair of captain Bavuma and Hendricks set the tone with a massive stand, and Miller launched an all-out attack to finish it off rapidly. Remember, South Africa made five changes from their side that won the second T20I - they were without Shamsi, Ngidi and de Kock, among others - and they still ended with a comfortable win.

Hendricks around the wicket

Debutant White is the last man

18.6
W
Williams to Young, OUT, good catch by the man at cover turning around and running behind. The bat face opens as he again goes to loft that full ball on off over extra cover, but doesn't get the timing this time

Camper: "Frustrating how Ireland are still the occasional giant killers after all these years. Maybe of their players play county cricket. Today was a golden chance to win with pretty much all of SA's top brass in bowling absent smh."

18.1
0
Williams to Young, no run, bowls this from wide of the crease, and goes full and wide of off. The batter goes for the drive, but is beaten

17.6
4
BE Hendricks to McCarthy, FOUR, inside edge for four this time. Some late entertainment here, with the game all but decided already. Yorker length on leg, and he goes for the flick by making room but gets an inside edge past the keeper diving to his left for four behind the wicket

The ball is lost amongst the trees, and a new one is called for

Hendricks on for Fortuin. Over the wicket