Series preview: Mets vs. Marlins
8yAdam Rubin
Carrasco has bone fragment removed from elbow
5d
A fans guide to abiding the LOL Mets
19dDevin Gordon
Jeff Passan answers 20 burning questions about the MLB playoffs
19dJeff Passan
What's next for the New York Mets after Luis Rojas' departure
20dBradford Doolittle and David Schoenfield
Mets move on from Rojas after 3rd-place finish
21d
Mets likely to make Rojas decision before others
25d
MLB Power Rankings: Where all 30 teams stand in the final week
25dESPN.com
Mets give Syndergaard start, shut deGrom down
27d
Your squad isn't going to the MLB playoffs? The No. 1 offseason question for each eliminated team
21dBradford Doolittle
Passan's early MLB free-agency tiers: Which stars are going to get paid this winter?
26dJeff Passan
MLB Power Rankings: Where all 30 teams stand as playoff picture comes into focus
32dESPN.com
Prospects who have taken the biggest step forward in 2021 for all 30 MLB teams
34dKiley McDaniel
Jun 6, 2013 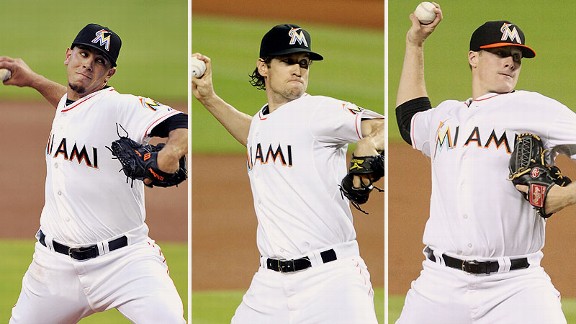 The Mets are due to face (l to r) Jose Fernandez, Kevin Slowey and Tom Koehler this weekend at Citi Field.METS (23-33, fourth place/NL East) vs. MIAMI MARLINS (16-44, fifth place/NL East)

• Giancarlo Stanton, who has been out since straining his right hamstring against the Mets on April 29, began a rehab assignment Tuesday with Class A Jupiter. Also in the midst of rehab assignments: Donovan Solano (intercostal muscle), Joe Mahoney (hamstring) and Logan Morrison. Right-hander Nathan Eovaldi (shoulder) has one remaining rehab start before returning from the disabled list. 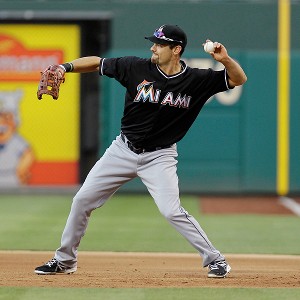 Once Stanton returns, Chris Coghlan should get exposure at third base and rookie Marcell Ozuna in center field and left field. Coghlan hasn’t been an everyday third baseman since 2009 in Triple-A, but he manned the hot corner during his college career at Ole Miss.

• Ozuna, who has been starting in right field in Stanton’s absence, lost a 16-game hitting streak last Saturday against the Mets. It was the second-longest streak for a rookie in Marlins history, trailing only Edgar Renteria’s 22-game streak in 1996.

• After last weekend’s series against the Mets, the Marlins activated first baseman Casey Kotchman from the DL and promoted left-hander Edgar Olmos from Double-A. Left-hander Wade LeBlanc was designated for assignment and outfielder Jordan Brown was demoted to Triple-A.

• Highly regarded outfield prospect Christian Yelich, who excelled against the Mets during spring training, landed on the disabled list at Double-A Jacksonville with an abdominal strain. That will delay his promotion.

Lucas’ four-hit game Sunday made him the fastest ever to accomplish that feat to begin his major league career with the Marlins -- his third game, and second start. Hanley Ramirez had a four-hit game in his fourth career game. Ozuna did it in his sixth career game, earlier this season.

• Closer Steve Cishek blew a save Tuesday, serving up an extra-innings homer to Philadelphia’s John Mayberry Jr. He has converted five of seven chances.

• Former Marlins manager Jack McKeon, who remains a presence around the organization, underwent heart bypass surgery Monday. He is 82.

• Miami is 6-3 against the Mets this season.

• Ricky Nolasco and reliever Ryan Webb are available via trade, but not Cishek or left-hander Mike Dunn, according to MLB.com’s Joe Frisaro.