Rapid Reaction: Mets 6, Marlins 5
8yAdam Rubin
Carrasco has bone fragment removed from elbow
7d
A fans guide to abiding the LOL Mets
21dDevin Gordon
Jeff Passan answers 20 burning questions about the MLB playoffs
21dJeff Passan
What's next for the New York Mets after Luis Rojas' departure
23dBradford Doolittle and David Schoenfield
Mets move on from Rojas after 3rd-place finish
23d
Mets likely to make Rojas decision before others
28d
MLB Power Rankings: Where all 30 teams stand in the final week
27dESPN.com
Mets give Syndergaard start, shut deGrom down
29d
Your squad isn't going to the MLB playoffs? The No. 1 offseason question for each eliminated team
23dBradford Doolittle
Passan's early MLB free-agency tiers: Which stars are going to get paid this winter?
28dJeff Passan
MLB Power Rankings: Where all 30 teams stand as playoff picture comes into focus
34dESPN.com
Prospects who have taken the biggest step forward in 2021 for all 30 MLB teams
36dKiley McDaniel
Jul 30, 2013

MIAMI – Ike Davis capped a three-run seventh inning with a double into the right-field corner that scored hustling Marlon Byrd from first base with the tiebreaking run and the Mets beat the Miami Marlins, 6-5, Monday night at Marlins Park.

Daniel Murphy produced his third RBI of the game and Byrd had an RBI single earlier in the frame as the Mets overcame a two-run deficit against Miami’s bullpen. 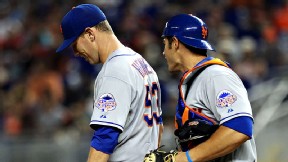 Jeremy Hefner was absolved of a loss after the Mets posted three runs in the seventh.

The Mets snapped a three-game losing streak. They won for only the fourth time in 12 games against the Marlins in 2013.

The Mets improved to 9-37 when trailing after six innings.

Jeremy’s swoon: Jeremy Hefner has surrendered 19 runs (16 earned runs) in 11 2/3 innings over his past three starts.

No. 8 hitter Jeff Mathis chased him with one out in the sixth with a two-run single that staked Miami to a 5-3 lead.

Hefner tossed three no-hit innings before the Marlins started to tee off in the fourth. Stanton doubled. Ed Lucas tripled. And Donovan Solano was hit by a pitch.

Still, Hefner should have been out of the fourth with a 3-1 lead. Instead, shortstop Omar Quintanilla’s two-out error on opposing pitcher Jacob Turner’s bases-loaded grounder allowed two runs to score.