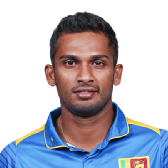 Hearing that the match has now officially been called off, which means Dambulla Viikings win their first LPL match, and Kandy Tuskers get their second heartbreaking defeat in a row, after having lost the tournament opener in a Super Over finish.

Key to the Viikings victory was the 127-run stand between Dasun Shanaka and Samit Patel, which came off just 64 balls. Shanaka and Patel started steadily against spin before attacking the Tuskers fast bowlers late in the innings - Shanaka ending with 73 off 37 balls. 196 always seemed an imposing total, but Tuskers were making a fist of it, with Kusal Mendis looking decent, when the rains came down. Had Kamindu Mendis not holed out the previous over, Tuskers might even have been ahead of the DLS par score, as they were for much of their innings.

THe rain still seems to be falling in Sooriyawewa, so we're expecting delays in the Colombo Kings v Galle Gladiators game tonight as well. But join us on the live scoring for that game. For now, this is Andrew Fidel Fernando signing off.

6:49pm, Hearing cut-off time is 7:28, so we have a little time. Looks like rain is still falling on those covers though,

It's not looking good folks. The whole ground is covered now, which means it will be at least 20 minutes before a restart is possible. It'll be gutting for Tuskers to go down by four runs here, especially when Kusal Mendis was batting pretty well.

There's not a lot of time to play with here. the next game starts at eight, with a toss scheduled for 7:30. It's all being played at the same ground, of course. So I'm guessing that if the rain persists, they won't waste too much time waiting to call this game off. ****

But the rain has got quite heavy now, and the covers have to come on. This is good news for Viikings, who at this stage are four runs ahead. That wicket of Kamindu Mendis in the previous over may end up being decisive, and hurtingTuskers if we have no more play.

8.6
0
Madushanka to BKG Mendis, no run, oh dear, that could have been bad for Kusal and Tuskers. This is shortish and wide. Kusal throws his bat at it, but gets only a thick outside edge. The ball flies out and lands just short of short third man.
8.5
1
Madushanka to Gunaratne, 1 run, turned beyond midwicket for one

Asela Gunaratne is the new guy.