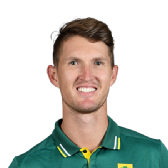 That's it from us today. Come back for the series decider tomorrow. For Hemant Brar, I'm Peter Della Penna. Take care!

SA captain Heinrich Klaasen: "We brought in a couple of big hitters to try something new and it paid off tonight. I loved the way we played with intent. That was a big message we spoke about the last couple of days and we finally executed it. Credit must go to all our bowlers especially Dwaine. To take five in a T20 is a special performance. We maybe had one or two overs that weren't executed right but overall very pleased."

Man of the Match is Dwaine Pretorius for his 5 for 17: "I'm just happy that I could contribute to the team tonight. We had good plans that we executed quite well. I was just trying to mix up my line and length to make sure guys couldn't line me up. That was our whole bowling unit's plan and the spinners bowled really well. Overall, the previous game we played a lot of good cricket, just maybe lost the big moments. I think we played those big moments better tonight."

Babar Azam: translated from Urdu "I think we fell short with the bat. We couldn't score enough runs in the middle overs and couldn't get the partnerships going. It was a similar wicket as of the first T20I but we made some mistakes with the ball that cost us. Hopefully, it will be different result tomorrow. We have back-to-back games, so we will plan about it in the morning."

Reeza Hendricks: "It's a pretty happy camp. We obviously were one-down coming into today and it was a pretty important game we had to win. The boys did well. We pulled it off so going into the last game it's going to be a good one. It was important to get some runs especially losing a couple of wickets up front. So to have contributed I'm happy and the boys pulled it through at the end. Unbelievable to get five wickets in a T20 game doesn't come around often and for [Pretorius] to do that was a special performance."

9.14 pm Series level now at 1-1. Decider is tomorrow in Lahore. Tremendous spell from Pretorius combined with pressure from the spinners Shamsi and Smuts sets up a very easy win in the end. Pakistan looked like that had a chance to claw back in the Powerplay following Shaheen's wicket-maiden, but he was curiously removed from the attack with figures of 2 for 6 in two overs and South Africa were more than happy as van Biljon and Hendricks combined for a 78-run stand.

15.6
1
Shaheen Shah Afridi to Miller, 1 run, good length ball on off stump, taps this with soft hands behind point for one.

Salman: "Babar would be under tremendous pressure after this defeat. He made poor call earlier by not bowling Shaheen the third over when he was doing great with the ball. Another bad call was opting for Haris and Iftikhar in this match and not replacing them. Both player will most likely be replaced for the series decider. Put this alongside with his poor form. Testing times ahead"

15.5
0
Shaheen Shah Afridi to Miller, no run, full and wide, carves this drive to extra cover on the ring.

Irfan Rahman: "Its simple - if someone starts with 2/6 of 2 overs, what would SA hope for - please dont bring him back till the match is practically over"

15.4
4
Shaheen Shah Afridi to Miller, FOUR, another misfired yorker attempt winds up as a full toss at knee height tailing down leg stump, just flicks this to help it on its away through fine leg for a freebie boundary.
15.3
1
Shaheen Shah Afridi to Klaasen, 1 run, good length on fourth stump, slapped wide of mid-off for a single.