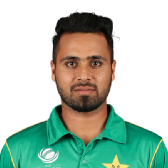 Player Of The Series

6.31pm That's it, then. A hugely entertaining tour, and Pakistan have come out on top in both the ODI and T20I series. A big achievement from them, and some encouraging signs for South Africa as well. We hope you enjoyed our coverage. Until next time, it's goodbye from me, PDP, and Thilak.

Babar Azam, Player of the Series: "I want to thank the South African board for the facillities they've provided, on and off the field. We've really enjoyed this tour, despite the quarantine and everything. It would be even better if our fans were here, but unfortunately that was not possible because of Covid-19, but we got a lot of support on social media. Once the set batsmen got out, a bit of pressure came onto the middle order today. We'll sit down and talk about it, and give the players confidence so they can make up for the mistakes they've made. When we left, we left with the idea that we had to win this series and give 110%, and that's what we did. Fakhar performed brilliantly in the ODIs, the bowlers were outstanding overall. When the players perform like that, the results will follow. As for my performance, it was all about giving 100%, enjoying my cricket, and do what the team needs."

Faheem Ashraf, Player of the Match: "I've been looking to read the batsmen's movements till the end, and that has really helped me as a bowler. Our bowlers set the tone at the top, and that made it easier for us later on. The team management has shown their faith in me, so I don't feel any pressure."

Heinrich Klaasen: "We had no right to get so close at the back end. I can't fault our bowlers and fielders today, they showed great fight, great character. We have a really good squad, young cricketers, but unbelievable talent, so disappointing to lose 3-1, but proud of the fight they showed tonight. It was an unbelievable opportunity for a lot of the young guys who were back-up to the big players to show their skillsets, and a couple of lads have really grabbed the opportunity, and I'm pleased for them. The gap in our performances is a concern. We showed tonight and two games ago that we can really compete against a side that's playing good cricket, but when we've been bad, we've been too bad."

NAUMAN: "Still believe first choice players "allowed" to leave for IPL was both foolish, and kinda disrespectful to the International game as well as visitors. Hurts SA in getting their combinations right ahead of WC."

Chief Selector: "Muhammad Nawaz having Jadeja like impact for Pakistan taking wickets at will and also hitting top class shots. My man of the match. Great effort by Pakistan beating both the SA first choice side and the A or B team whatsoever."

Brandon : "South Africa's dreadful Summer. Beaten by Pakistan home and away. Poor selections by Boucher with team lacking balance. What has Boucher achieved since taking over as coach? Great player. Terrible coach." -- A bit harsh, when it's still quite early in his tenure?

Tanzeel: "Never seen Pakistan losing in a run chase if Hasan Ali comes back not out. Lucky charm for Pakistan."

Kash: "Credit to Pakistan for entertaining us in what was supposed to be a one-sided game"

Muhammad Rana: "Those two no-balls lost it for SA"

6.12pm Phew, what a match. Not the highest quality of cricket from either team, but all the nerves and all the errors added up and gave us a thriller to end this series. Pakistan have been the better team, as the 3-1 scoreline shows, but South Africa's new and new-ish faces have shown there's plenty of talent to work with.

19.5
6
Williams to Mohammad Nawaz, SIX, wins it with a six! Williams goes short, on off stump, and it's not a bad short ball, because it gets up over chest height, but Nawaz is in position quickly and pulls it away to easily clear the square leg boundary
19.4
0
Williams to Mohammad Nawaz, no run, good ball. Sees Nawaz looking to create room, and follows him with a back-of-a-length ball. Looks to squeeze it away through point, can't put bat to ball

Third man and fine leg are back, as are deep square leg and long-on.

19.3
2
Williams to Mohammad Nawaz, 2 runs, another good ball, yorker length and angling into the pads, bowling to his field. Clips to the right of deep midwicket, and Hasan moves very quickly to ensure they get two runs for this
19.2
1
Williams to Hasan Ali, 1 run, low full-toss on the stumps, swatted to deep midwicket

Over the wicket to Hasan. Four back on the leg side.

19.1
1
Williams to Mohammad Nawaz, 1 run, good ball to start, in the blockhole and angling into the stumps. Gets his front pad out of the way and drives to long-off

Here's Lizaad Williams, round the wicket to Nawaz.

7 off 7 now. That one shot has changed the entire mood of the game.