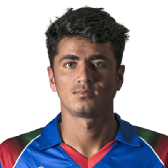 Chasing down 191 was never going to be easy for Scotland but no one would have expected them to collapse in the manner they did. Mujeeb Ur Rahman rocked their chase with a three-wicket over, and went on to complete his maiden five-for in T20Is, finishing with figures of 4-0-20-5.

The lower order then stood no chance against Rashid Khan, who picked up 4 for 9 in 2.2 overs as Scotland were bundled out for 60 in 10.2 overs. The margin of victory, 130 runs, was the biggest for Afghanistan in this format.

Sign up for ESPN+ and catch the Men's T20 World Cup live in the US. Match highlights of Afghanistan vs Scotland is available here in English, and here in Hindi (US only).

Earlier, after Mohammad Nabi had opted to bat, Hazratullah Zazai and Mohammad Shahzad provided Afghanistan with a blazing start, with the fifty coming up in just 5.1 overs. Najibullah Zadran and Rahmanullah Gurbaz then added 87 in 8.4 overs for the third wicket to lift the side to a total that proved well out of Scotland's reach.

A power-packed powerplay
Coming into this match, Shahzad had scored 309 runs in six T20Is against Scotland at an average of 51.50 and a strike rate of 148.55. In four of those games, he was the Player of the Match.

Shahzad was playing his first game for Afghanistan since June 2019, but it didn't seem to matter as he started in his typical aggressive manner: smashing the first ball he faced, from offspinner Michael Leask, over long-off for a six.

Two balls later, Zazai targeted the deep-midwicket region for his first six. That was the shorter side of the ground as well. But soon the dimensions stopped mattering. In the fifth over, Zazai took on the longer boundary and smashed Brad Wheal for a 101-metre six.

Shahzad fell to Safyaan Sharif for a 15-ball 22 on the penultimate ball of the next over, but the onslaught from the openers meant Afghanistan ended the powerplay on 55 for 1, the joint-most by a team in this World Cup.

Watt applies brakes before Zadran, Gurbaz re-accelerate
After the powerplay, Zazai hit only one boundary - a six off Chris Greaves - before Mark Watt bowled him with a 107kph yorker.

Gurbaz, meanwhile, took seven balls to open his account. At one point, he was on 15 off 20 balls and it started looking like Scotland could pull things back.

That wasn't to be the case though as Zadran kept founding boundaries at regular intervals. The hundred came up for Afghanistan in the 13th over. Soon Gurbaz too found his touch. After moving to 23 off 27, he helicoptered Josh Davey over deep-midwicket before launching Wheal for two more sixes in the 17th over.

Watt, who had conceded only ten from his first three overs, bore the brunt too, with Zadran hitting him for a four and a six in a 13-run over. Gurbaz fell for 46 but Zadran didn't miss out on the half-century, bringing up the milestone off 30 balls and helping his side to a daunting total.

Kyle Coetzer hit two fours off Naveen-ul-Haq to take the side to 27 for no loss after three overs. That was the last time anything went Scotland's way as Mujeeb picked up three wickets - all off googlies - in one over.

Coetzer was the first to go, bowled through the gate. Calum MacLeod lasted just one ball and was lbw. Richie Berrington survived the hat-trick ball but lasted only two more deliveries as Mujeeb snared him lbw on the last ball of the over.

Mujeeb completes five-for, Rashid cleans up the tail
From the other end, Naveen had Matthew Cross caught behind, Shahzad diving full-stretch to his right to take the catch.

Mujeeb then rattled Munsey's stumps from around the wicket to leave Scotland 36 for 5, with Rashid still to come into the attack.

Rashid struck with his third ball, this time Leask failing to read the googly and being lbw. In the next over, Mujeeb completed his five-for by bowling Watt with a carrom ball before Rashid polished off the tail.