One of the more intriguing elements to the Manny Machado trade discussions -- beyond the question of Machado's destination -- is the Baltimore Orioles' approach to fielding offers for the four-time All-Star. ESPN's Buster Olney has spoken to competing executives who see a more focused, purposeful and engaged Orioles front office this summer. But that's not a universal take.

"I wouldn't call them methodical or organized, and the aggressiveness comes and goes,'' said one team official who has dealt with the Orioles recently. "There is a lot of stop-and-go to the process.''

Will a deal come to fruition before or after the All-Star break? Barring the mother of all trade-deadline shockers, Machado will be gone soon enough and the other position-player dominoes will start falling. One intriguing Plan B name making the rounds: Minnesota Twins second baseman Brian Dozier.

Dozier entered this season with hopes of playing in the postseason and enhancing his free-agent payday with a productive "walk year,'' but events haven't played out that way. The Twins are 40-49 and 8½ games behind Cleveland in the AL Central, and one bad week is probably all it takes for Derek Falvey and Thad Levine to punt on the idea of contention and aggressively shop Dozier, Lance Lynn, Fernando Rodney and the team's other short-term veteran pieces.

Dozier's .223/.308/.409 slash line has put a bit of a crimp in his appeal. But he's two years removed from hitting 28 homers and slugging .646 after the All-Star break. Dozier ranks 148th among 163 qualifying MLB hitters with a .248 batting average on balls in play this season, so it's not unreasonable to think he has a second-half run in him. He is also a popular, team-oriented veteran who is only going to add to a contender's clubhouse mix.

So which teams could be in the mix on Dozier? Sources said the Dodgers, Diamondbacks and Brewers, three teams in the heart of the Machado pursuit, are all potential landing spots.

The Dodgers, who rank 25th in the majors in second base OPS and have expressed interest in Dozier in the past, might be the best fit. The Brewers are playing Jonathan Villar at second base and the Diamondbacks are going primarily with Ketel Marte, and Dozier would be an offensive upgrade over either player. He also would take a considerably smaller bite than Machado out of a team's farm system.

"The guy is a proven home run hitter and a leader, and on the right club, hitting in the right part of the lineup, he can get hot with anybody,'' said a scout. But first, everybody needs to see how the Manny saga plays out.

The Red Sox are blanketing the relief market, and they're aiming higher than just a depth piece. Craig Kimbrel is a free agent in November, and the Sox are looking for a reliever who's an upgrade rather than a complement to Joe Kelly, Matt Barnes, et al.

The Red Sox sent a top evaluator to watch Miami's Kyle Barraclough, and one source said they checked in with Colorado on Wade Davis. It's tough to see that deal getting much traction, given that the Rockies are 4½ games out in the NL West and Davis is in the first year of a $52 million contract.

San Diego is loaded with tradable bullpen assets in Brad Hand, Kirby Yates and Craig Stammen. But the Padres withheld Drew Pomeranz's medical records when they traded him to Boston in 2016, and the ill will ran deep enough that it's hard to imagine A.J. Preller being at the top of Dave Dombrowski's call list.

Any evaluation by the Red Sox has to factor in the hyper-intense pressure in the Boston market. Barraclough has been dominant in Miami. But how would he react when he faces Aaron Judge, Giancarlo Stanton and Gary Sanchez before 45,000 fans in the Bronx? That's always something the big-market clubs have to consider. The Yankees are mindful of it each time Sonny Gray takes the mound and perpetuates the "certain guys can't handle playing in New York'' narrative this summer.

The Indians have been linked to Machado, but they've faded to the fringes of late. Machado would have to shift to third base in Cleveland because of Francisco Lindor. The Indians and other contenders think Machado would make the move with the right club. But his public pronouncements to this point certainly indicate a desire to stay at short if possible.

The Indians being the Indians, money is also a concern in trade talks. Stop us if you've heard that before.

The big mandate for Chris Antonetti and Mike Chernoff is upgrading a bullpen that ranks 30th in the majors with a 5.37 ERA. Neil Ramirez and Oliver Perez have been solid pickups, and the Indians have a big enough lead in the division to wait in hopes the glut of supply causes prices to drop. They added Andrew Miller by trade in 2016 and Joe Smith last year, and they're determined to make another deal this month. In the meantime, they'll have to brace for a fan backlash every time the bullpen door swings open and Josh Tomlin and Zach McAllister come jogging out.

Two stretch-drive considerations in Cleveland: (1) The Indians hope to get Miller back from a knee injury after the All-Star break; and (2) they have two starters who are perfectly happy to try starting on three days' rest in the postseason.

Corey Kluber did it with great success during the Tribe's World Series run in 2016; he was less effective last year while dealing with back issues. And Trevor Bauer has consistently expressed a preference for pitching on three days' rest. He's 0-2 with an 11.13 ERA in two postseason starts on short rest. But if anyone is enough of an innovative thinker to attack the problem and try again, it's Bauer.

The big question is, who'll be the third starter and who pitches in relief? Shane Bieber could slot in as a multi-inning reliever in the postseason, and then it's likely to come down to a choice between Carlos Carrasco and Mike Clevinger. Carrasco hasn't pitched out of the bullpen since 2014. But if the Indians win the division -- and Carrasco is willing to embrace a role as a versatile, shutdown-type reliever in October -- he could be a postseason weapon for the Tribe.

J.A. Happ and Cole Hamels have been making the rounds in trade-deadline speculation for a while, and Garrett Richards was starting to look like a popular trade target before leaving Tuesday's start in the third inning with right forearm irritation. But the biggest mystery arm among MLB starters belongs to Tampa Bay's Nathan Eovaldi, who brings a novel combination of attributes for potential suitors to consider.

Eovaldi is a free agent in November, so he's a rental. But he's making only $2 million this season, so he's very affordable. He has had two Tommy John surgeries, so the medical caution flags are abundant. But he's 2-0 with a 0.95 ERA and a 23-3 strikeout-to-walk ratio in his past three starts. With numerous scouts in attendance, Eovaldi took a perfect game into the seventh inning in a 9-0 victory over the Mets on Sunday.

So what do teams make of Eovaldi as a trade target as the deadline approaches?

"He's throwing as good as any pitcher who's available on the market, and he's making less than all of them,'' a scout said. "So there's value there.

"It's a difficult delivery. He's incredibly strong. The guy is a workout warrior. When you see him physically, you're like, 'Geez, this is a different animal.' But the delivery is not ideal. You're buying him for 2½ months, and if he does great, maybe he can get a contract with somebody. But I think you have to go into it with the idea that he can break at any time.''

The Rays, true to form, are pushing Eovaldi, along with pending free agents Wilson Ramos, Adeiny Hechavarria and Sergio Romo, at the deadline. They'll also listen on Chris Archer, who just returned from an abdominal strain. But Archer is signed through 2021 at a reasonable price, so the Rays feel no sense of urgency to move him. There's not enough action on Archer at the moment for someone to even invent a good rumor.

Athletics staying light on their feet

The trade-deadline outlook keeps evolving in Oakland, where the Athletics have won 17 of 22 games to move within six games of Seattle in the wild-card race. Billy Beane and David Forst are expected to confer with ownership soon to get their directive on how to approach the deadline. If the A's had any inclination to sell, it has been put on hold by the team's recent surge.

"Billy is always conscious of the vibe he sends the team,'' said one person familiar with the Athletics' thinking. "That's not the message he wants to send right now.''

The A's have gotten a ton of feelers on closer Blake Treinen, but he's not going anywhere. Treinen is making $2.15 million this year and is under team control through 2020, so he's off-the-charts expensive in terms of a prospect haul. The emergence of Slippery Rock product Lou Trivino as Treinen's wingman has given Oakland a dynamic late-inning combination.

Who needs Machado most? 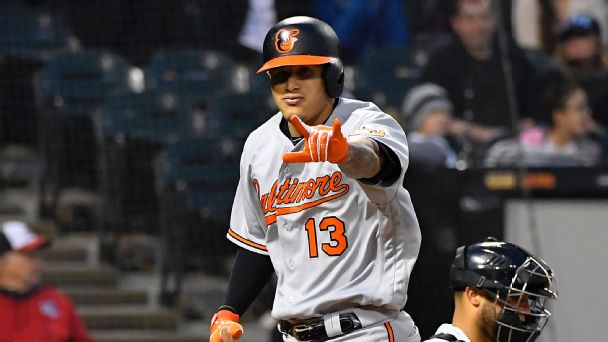 We traded Manny Machado to every team. Here's where the O's shortstop has the biggest impact. Bradford Doolittle »

Jed Lowrie and Jonathan Lucroy, Oakland's veteran short-timers, haven't generated much buzz. Ken Rosenthal of The Athletic recently reported that the A's have expressed interest in a contract extension for Lowrie, while the San Francisco Chronicle's Susan Slusser reported the same for the team's resident home run machine, Khris Davis.

Oakland's outlook for 2019 has been affected by a mind-numbing onslaught of injuries to top pitching prospects. A.J. Puk, James Kaprielian and Daulton Jefferies are recovering from Tommy John surgery, while Grant Holmes is on his way back from a rotator cuff injury.

In the meantime, the A's are making do with Edwin Jackson, Brett Anderson and Trevor Cahill as surprise additions to their rotation. Bob Melvin is suddenly emerging in the rearview mirror as prime AL Manager of the Year competition for Seattle's Scott Servais and newcomers Aaron Boone and Alex Cora.

"They should bring back Dallas Braden and get the band back together,'' said one evaluator, laughing.