All right, we know. There won't be NHL players in the 2018 Olympics. A refresher on why can be found here. While we're still lamenting the loss of talent, we'd be remiss to miss out on the tournament entirely. There are still plenty of reasons to tune in, so your friends at ESPN decided to help out by creating the ultimate Olympic viewing guide.

When will games be played, and where can I watch them?

The games will be broadcast on NBC and its various networks, including NBCSN. Each event will also be available for live streaming and on-demand viewing on NBCOlympics.com. Since PyeongChang is 14 hours ahead of the Eastern time zone, you'll notice some inconvenient start times.

When are the gold-medal games?

The women's tournament includes eight teams. Pool A features the top four teams, headlined by gold-medal favorites Canada and the U.S. (more on them later) plus Finland and the Olympic Athletes from Russia (OAR).

Pool B has Sweden, Switzerland, Japan and Korea. South Korea qualified as a host, but weeks before the tournament it was announced that through a special agreement with the IOC and the IIHF, 12 North Korean players will join the team to form a unified Korean team.

Six teams will advance to the playoff bracket, with four quarterfinalists and two teams earning byes to the semifinals. All four teams from Group A will automatically advance, with the top two teams in that group getting the byes. The bottom teams in Group A will face the best two from Group B in the quarterfinals.

Each team will play three round-robin games. Then the winner from each group, plus the team with the second-best record, will advance to the quarterfinals. Everyone else will move to qualification contests. The winners of those games will meet the other group in the quarterfinals.

Is it the same format as an NHL game?

Kind of. The one thing you'll notice is a larger ice surface. The Olympic hockey rink is roughly 200 feet long by 98 feet wide -- about 10 feet wider than an NHL venue. Just like the NHL, we'll have three 20-minute periods. And if it ends in a tie? Well, here's what will happen:

In the preliminary round and qualification round, overtime is a five-minute sudden-death period, followed by a shootout.

In the quarterfinals, semifinals and bronze-medal game, overtime is a 10-minute sudden-death period, followed by a shootout.

In the gold-medal game, overtime is a 20-minute sudden-death period, followed by a shootout.

Who do we think are the favorites?

Find more stories about the men's and women's hockey tournaments in Pyeongchang here.

On the women's side, it's undoubtedly Canada and the U.S.

Since the women's tournament was introduced in 1998, these countries have met in the gold-medal game four times (the one exception was 2006, when Canada faced Sweden). The Americans are looking for revenge after the 2014 final, in which they squandered a two-goal third-period lead before falling in overtime. Ten Americans return from the Sochi squad.

You might remember the U.S. team fought for equity last spring, and even threatened to hold out for the World Championships. For an update on how that affected the players, read this profile of one of the team's star players, Amanda Kessel.

For the men, we think the Olympic Athletes from Russia are an early favorite. Their roster is stacked with talent -- headlined by former NHLers Ilya Kovalchuk and Pavel Datsyuk -- thanks to the KHL taking a 33-day Olympic break. In fact, most elite European leagues paused for the Olympics or accommodated its players who wished to attend.

The Canadians boast experience -- Team Canada features players who have compiled 2,140 combined NHL points and 5,444 NHL games in their careers. (It's by far the most among the 2018 crop, but consider the Canadians in Sochi had compiled 8,400 NHL points and 12,936 NHL games).

Meanwhile, the Swedes could be a dark horse, with many talented European-based players including Rasmus Dahlin, a 17-year-old prodigy widely considered a generational defenseman and the presumed No. 1 pick of the 2018 NHL draft.

Do the American men have a shot?

Well, of course there's always a chance. It would be a big upset if Team USA took home gold or silver (not a "Miracle on Ice" level of an upset, but still pretty big). The Bovada sportsbook has set the Americans' odds at 10-1, which ranks them sixth. According to Bovada, the Olympic Athletes from Russia are first at 1-1, followed by Canada (9-2), Sweden (9-2), Finland (8-1) and the Czech Republic (9-1).

Who the heck are these Team USA players?

Team USA opted for experience, primarily choosing players who were standouts in European professional leagues. Some of them are players you might remember from the NHL (like one-time 48-goal scorer Brian Gionta), while others couldn't quite make an extended NHL run (such as Chris Bourque, the son of Hall of Fame defenseman Ray Bourque and a longtime AHL player).

There are four current college players on the roster, including Boston University's Jordan Greenway, the first African-American to represent Team USA in hockey at the Winter Olympics. Team USA decided not to play some of its rising stars who were eligible, such as Buffalo Sabres prospect Casey Mittelstadt and Harvard defenseman Adam Fox, who are both 19.

The trio in goal includes Ryan Zapolski, David Leggio and Brandon Maxwell. Here's much more on each of them, including how they found out they made the team.

These are games I'm recording on my DVR

This will be our first look at the American women. Finland will prove a good early test; the team is coming off a bronze-medal finish at the 2017 World Championships.

We're very curious to see the unified Korean team. Read this profile of Caroline Park, an Ivy League med student who will take time off for the Olympics and shares her thoughts on her team being used as a political statement.

The Japanese women's team -- nicknamed Smile Japan -- was a darling of the Sochi Games, making the tourney after a 16-year absence and genuinely looking excited to be there (plus they had awesome celebrations). 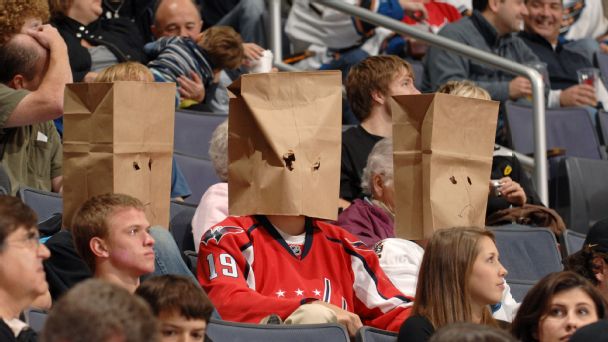 Greg Wyshynski and Emily Kaplan discuss the most long-suffering fan bases in the NHL on the back of the Eagles' Super Bowl win, talk Rick Nash trade rumors as well as deadline teams to watch. Plus, former Devils director of hockey analytics Sunny Mehta stops by to cover the rise of goals across the league and more. Listen »

Let's see how good this Canadian men's team is. Also, I'll be following Mike Testwuide, who flamed out as a Flyers prospect and became a serendipitous Olympian -- for South Korea.

Ah, two games at once. Thank goodness for DVR. Can't wait to see Dahlin play. Our prospects expert, Chris Peters, has been raving about him.

Do I even need to explain? A good appetizer for the anticipated gold-medal rematch.

No, it's probably not going to be as intense as the showdown in Sochi, but it's still USA versus Russia (politically correct name be damned). Of course, my eyes will be glued.