Just how evil can the Yankees get? Imagine this dream/nightmare 2018
4yAndrew Marchand
This is the wildest MLB trade deadline in years -- and it's not over yet. Where does it go from here?
Washington Nationals
5hDavid Schoenfield
Trade grades: Yankees continue deadline spree by acquiring Anthony Rizzo from Cubs
9hDavid Schoenfield
Yankees acquire All-Star slugger Rizzo from Cubs
10h
Patiño blanks Yanks as Rays pound Cole, bullpen in 14-0 rout
11h
Boone says Yankees 'a lot better' with Gallo
17h
Trade grades: Brewers solidify infield with Eduardo Escobar
1dBradford Doolittle
Judge hits tiebreaking single in 10th, Yankees beat Rays 3-1
1d
Yankees swing for the fences with Gallo, but was it the right move -- and what's next?
1dDavid Schoenfield
Jan 15, 2018

It's that time of year again, with spring training just a month away, when we drop the last letter of our name -- turning ESPN into ESP -- and predict the New York Yankees' future.

Last season we had some fun and, as it turns out, our "dream 2017" scenario wasn't that far off. Let’s hop back in the DeLorean to see what will happen in Aaron Boone's first season as manager. (Note: A few of these things might not actually happen this year. Ahem.)

Feb. 14: Boone, known for his manager impersonations, does his initial news conference as if he were Joe Girardi. It's not what you want. Then, after pitchers and catchers hold their first workouts, Boone -- in a thinly veiled attempt to temper seemingly impossible expectations for his rookie campaign -- says that he thinks his roster is pretty good but will need a bit more to win a World Series.

Off to the side, GM Brian Cashman smiles devilishly.

Stanton's road to the Bronx 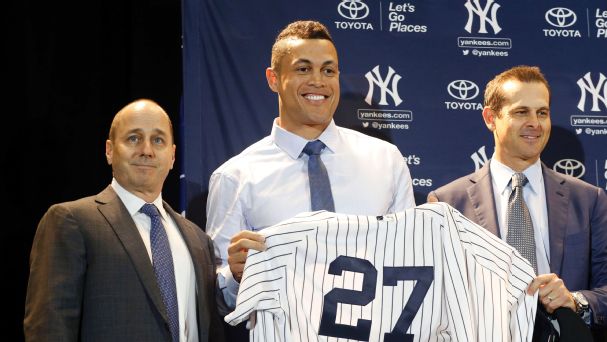 How the Yankees pulled off their empire-building blockbuster. Marchand »

March 2: Aaron Judge and Giancarlo Stanton bash behemoth batting-practice drives at Steinbrenner Field, moon shots that land on the turf at Raymond James Stadium, home of the NFL's Bucs, across the street. Police in Tampa are forced to shut down Dale Mabry Highway when the duo hits. Strangely, this improves traffic in the terminally gridlocked town.

Boone says he thinks the lineup is pretty good but adds that he still isn't convinced the Yankees have enough talent. Everyone in baseball rolls their eyes ... except Cashman.

March 27: In shades of his wild-card game implosion, Luis Severino gives up seven runs and lasts just two-thirds of an inning in the season opener at Rogers Centre in Toronto. The Yankees are shut out 12-0. After going on to lose all four games of the series, Boone laments, “See, what did I tell you? They want me to win with this lineup?!?”

Later, Boone is seen talking with Jays play-by-play announcer -- and Boone’s former Sunday Night Baseball partner -- Dan Shulman. Rumors out of Toronto are that Boone is considering a return to broadcasting.

April 2: During player intros before the Yankees' home opener in the Bronx, YES Network's Michael Kay asks, “Are fans saying, 'Booooooone'?” They aren't.

Boone receives the loudest boos, but Stanton, 0-for-14 up north, hears them, too. The Yankees go on to lose to the Rays 5-0. After a day off, they lose again to begin the season 0-6.

April 8: Next, the Yankees are swept by the Orioles. In the ninth inning, chants of “Binder! Binder! Binder!” can be heard among the 12 or so (pro-Girardi) fans remaining on a miserably cold Sunday series finale.

April 9: With the Yankees 0-10, reports surface that Alex Rodriguez has met with Hal Steinbrenner in Tampa. “Could A-Rod replace Boone again?” the headlines ask.

April 10: Boone receives a standing ovation as the winless Yankees hit Fenway Park for their first series of the year against the Red Sox. Suddenly, fans love Bleepin' Boone in Boston. The Yankees are ultimately swept, falling to 0-13. 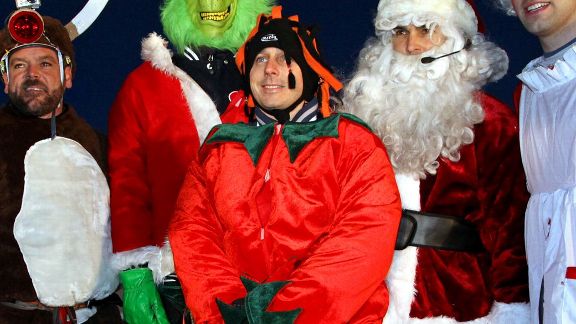 April 13: Cashman, having spent the past two years essentially trading nothing for something, finally heeds Boone’s pleas to improve the roster by acquiring the Orioles’ Manny Machado for three Single-A infielders even Keith Law has never heard of.

Just as they said they didn't court Shohei Ohtani during the offseason because they don't participate "philosophically" in the posting system, the Orioles say they also object, philosophically, to the potentially historic free-agent class of 2018, which means Machado had to go. Nobody understands that, either.

Boone declares that he is not considering a return to broadcasting.

May 1: The Yankees play slightly better but not well enough. Headlines accuse Boone of impersonating Joe Torre -- before his rings in the Bronx, when he was Clueless Joe with the Mets, Braves and Cardinals. The Yankees finish April last in the AL East at 10-20.

May 2: With radio talk shows and the blogosphere abuzz about A-Rod taking over for Boone, A-Rod’s spokesman, Ron Berkowitz, says, “A-Rod has no plans to manage the Yankees. His immediate goal is to take every broadcasting job in North America.”

May 15: Stanton, now leading the AL with 17 homers, strains his wrist when he and Judge are asked to sign Steiner Sports-authenticated dented fenders. Stanton misses five weeks.

Clint Frazier replaces Stanton -- and the Yankees take off. Suddenly, they're the best team in baseball, winning an AL-record 25 straight. People begin asking: Are they better without Stanton?

From Keith Law's free-agent rankings to all the big moves, we have the MLB offseason covered.
• Complete MLB hot stove coverage »

June 26: Marlins CEO Derek Jeter calls Steinbrenner, begging to be introduced before a game at Yankee Stadium. It's Jeter’s 44th birthday, he's hated in Miami, and the Marlins haven't won a game in about a month. “I just want to be loved again,” Jeter reportedly says. Steinbrenner advises Jeter to be more like A-Rod. Jeter says he'll consider starting an Instagram account and posting pictures of himself getting ice cream with his family.

Boone still wonders whether the Yankees are built for October. Boone, hired as a modern manager, says there are analytics that show that the Yankees’ 520 runs scored compared to 231 against is not as good as it seems. No one can find the stats he cites. Cashman, though, nods.

Sept. 15: The Yankees cruise through the rest of the season. With Hicks slumping, Gardner moves to center, and Harper becomes a regular starter. Still upset about being a reserve for so long, Harper hits 23 homers in September.

Oct. 1: Torres is the favorite to win Rookie of the Year, and the Yankees’ lineup going into the playoffs looks like this:

Boone says he thinks the Yankees might have the right balance, finally, with this righty/lefty setup. (All joking aside for a moment: While we are having fun here, the Yankees could, in theory, sign Machado and Harper after resetting their luxury-tax number -- and the above could actually be their lineup at some point. Seriously.)

Oct. 27: The Yankees win the World Series, sweeping the Cubs. They go 11-0 in the playoffs. Judge wins World Series MVP. The underrated story of the Yankees' season is their pitching; Severino, Masahiro Tanaka, Sonny Gray and CC Sabathia all thrive, while Dellin Betances has a comeback year to join Aroldis Chapman and David Robertson at the back end of the bullpen.

Boone, soaked in champagne, says he worries whether his team is deep enough to repeat. Cashman calls the Nationals about Max Scherzer. The Yankees are the Evilest Empire.