The rebuilding Bronx Bombers weren't expected to battle the BoSox for AL East supremacy -- at least not quite yet. 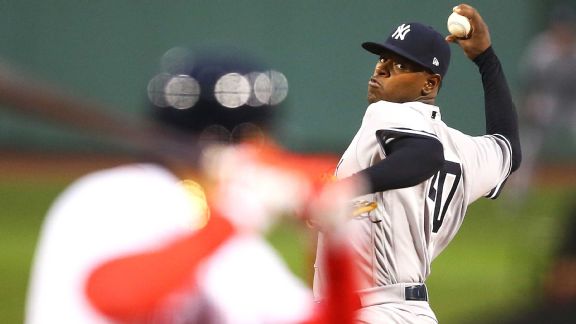 Who will win the AL East this year? Vote at the bottom of the page »

But the New York Yankees enter their three-game set against the Boston Red Sox with a two-game lead in the division. So now that 2017 is surging toward the summer months, where do the two rivals stand?

Yankees beat writer Andrew Marchand and Red Sox beat writer Scott Lauber size up the clubs, unit by unit, and Judge David Schoenfield dons his robes once again to render a verdict. Then, it's your turn to vote.

Marchand: The Yankees' infield has been a mixed bag. It's been very good up the middle -- and not very good at the corners. Starlin Castro is rightfully leading the AL All-Star voting at second base, while Didi Gregorius -- with an assist from Ronald Torreyes, while Gregorius was hurt to begin the season -- has picked up where he left off last year. At first base, Greg Bird struggled mightily and was hurt, while Chris Carter has hit like he did last year for the Brewers -- well, minus the 41-home run power. Third baseman Chase Headley began strong but had an awful May.

Lauber: When Deven Marrero has 70 at-bats by June, you know that injuries hit like a Mike Tyson haymaker. The list: Brock Holt (vertigo), Marco Hernandez (shoulder), Pablo Sandoval (knee), Dustin Pedroia (knee, wrist). Sore-shouldered DH Hanley Ramirez hasn't played first base, necessitating more of doubles machine Mitch Moreland and prospect Sam Travis' call-up. At shortstop, Xander Bogaerts is hitting for average, not for power. But third base is a mess, with Sandoval lapsing into a timeshare with Marrero and Josh Rutledge.

Judge Schoenfield: Interesting. Both teams have a disaster spot here, as the Yankees have MLB's worst wOBA at first base and the Red Sox have MLB's worst at third base. But Marchand's comment that Castro deserves to lead the All-Star voting ... over Jose Altuve or Robinson Cano ... umm, no.

Lauber: If you expected Mookie Betts to top his near-MVP 2016 and Andrew Benintendi to run away with the Rookie of the Year, then you've been disappointed. But Betts remains one of the AL's five best all-around players, and Benintendi is supremely talented -- if not impervious to the growing pains endured by all young players. As ever, Jackie Bradley Jr. is consistently inconsistent, with the Sox still awaiting that scorching streak. Chris Young is a nice alternative to Benintendi or Bradley against tough lefties.

Marchand: The Yankees' outfield has probably been the best in baseball. Aaron Judge is a Rookie of the Year/AL MVP candidate. Brett Gardner could surpass his best season in home runs by the end of this month. Aaron Hicks, who was the fourth outfielder, really deserves some All-Star consideration. Jacoby Ellsbury hasn't been a $153 million player, but he has played well.

Judge Schoenfield: With Mike Trout out, Judge and Gardner could both be All-Star starters, maybe alongside Mookie, and Hicks even has a chance to make the team.

Marchand: Gary Sanchez hasn't been the Gary Sanchez of last season, but that was basically impossible to duplicate. He has been fine as a hitter, though there is a feeling he may have regressed behind the plate. Austin Romine has been very serviceable as a backup, and the Yankees played great when he filled in for an injured Sanchez early in the year.

Lauber: OK, so neither Sandy Leon nor Christian Vazquez is making any All-Star teams. But the Red Sox are perfectly happy with how they call a game, throw out runners and play defense. Although the legend of Leon has diminished since his out-of-the-blue emergence last summer, he has developed such a strong rapport with Chris Sale that the ace lefty never shakes him off. With Vazquez behind the plate, Eduardo Rodriguez has blossomed into a reliable starter.

Judge Schoenfield: Red Sox catchers have slightly outproduced Yankees backstops, although a Sanchez hot streak would end that. If Sanchez's defense has indeed regressed, then ...

Lauber: Life after David Ortiz was always going to revolve around a star-studded rotation. Now that David Price is back from his spring-training elbow scare -- and pitching like an ace, to boot -- the Red Sox finally have the group they intended. Well, almost. Rodriguez's slip in the bullpen last week landed him on the DL. But Sale is the closest thing Boston has seen to Pedro Martinez, and although Rick Porcello was very unlikely to repeat his Cy Young act, resurgent Drew Pomeranz has solidified the back of the rotation. But depth is a major issue, with knuckleballer Steven Wright out for the season and few appealing Triple-A options.

Marchand: The Yankees' starting rotation has been, well, weird. Masahiro Tanaka -- the surest thing entering the season -- has been awful, but overall the rest of the staff has been solid. You can't predict baseball, Suzyn. Luis Severino and Michael Pineda have honored their talent so far, and while lefties CC Sabathia and Jordan Montgomery haven't been great, they've been good enough for back-of-the-rotation starters.

Judge Schoenfield: The Yankees actually begin the week with a slight edge in ERA -- impressive given the short porch in right field. Still, with Tanaka struggling and Price back ...

Marchand: The Bombers' bullpen has lived up to the hype. Even with Aroldis Chapman hurt, the pen has been very consistent. Tyler Clippard has had a good year, joining Chapman and Dellin Betances to form a formidable back end of games. This group has to be considered one of baseball's best, if not the best.

Lauber: All things considered, it could be much worse. New setup man Tyler Thornburg (shoulder) hasn't thrown a pitch and isn't close to doing so. But Joe Kelly and Heath Hembree are handling higher-leverage roles, Robby Scott is neutralizing lefties, and Matt Barnes has had highs and lows in the eighth inning. For sheer dominance, Craig Kimbrel is without peer among closers. It's hardly an exaggeration to call him unhittable.

Judge Schoenfield: They rank third (Red Sox) and fourth (Yankees) in bullpen ERA, so both pens are great. In the end, even if Chapman and Kimbrel are equal, the Red Sox don't have a Betances.

Lauber: Beating up on John Farrell is the favorite pastime of Boston sports-talk hosts and callers, and the manager certainly has his flaws. But while the "Fire Farrell" crowd will never admit it, he deserves credit for massaging a patchwork lineup to keep the Red Sox above .500 and within striking distance of the Yankees.

Marchand: Seemingly looser this year and buoyed by the youth movement, Joe Girardi has had an excellent start to the season. Girardi is a very good in-game manager and has to receive some credit for the professionalism on this young Yankees squad.

Judge Schoenfield: Girardi always seems to get the most out of his players and does a great job managing the bullpen.

Marchand: The Yankees have to be the favorites right now. Since the beginning of spring training, they've been beating teams. That's four months of baseball, including two that count. It doesn't seem like a fluke. They have done it without Bird or anyone else at first base producing much, and without Tanaka pitching like an ace. They'll also likely add a starter in a deal if they need one -- and have Chance Adams at Triple-A priming for a spot.

Lauber: By now, it's clear the Red Sox's offense isn't quite the same without Ortiz. It's also clear Big Papi is staying retired. As much as ever, it will be starting pitching that carries the Red Sox into October, and all else being equal, that's where they appear to have the biggest edge over the Yankees. Health permitting, Sale, Price, Porcello, Rodriguez and Pomeranz should enable Red Sox president Dave Dombrowski to focus on adding a hitter -- likely a third baseman -- before the trade deadline.

Judge Schoenfield: Sale-Price-Porcello could dominate the rest of the way, and Judge and Hicks are due for some regression for the Yankees.