With the demise of two-time Overwatch League stage finals winners New York Excelsior in the season playoff semifinals, the discussion is no longer about NYXL's finals homecoming or the No. 1 seed's dominance. Instead, it has shifted to the Overwatch meta game and hero picks and whether the No. 6 Philadelphia Fusion or No. 5 London Spitfire can make the most of the meta in the finals Friday and Saturday at Barclays Center in Brooklyn.

The meta shift that began in Stage 4 stymied the NYXL. With the loss of dive compositions centered around Park "Saebyeolbe" Jong-ryeol's Tracer and league MVP Bang "JJoNak" Seong-hyeon, the NYXL was picked clean by the Philadelphia Fusion's flexibility. Similarly, the Los Angeles Valiant, the other OWL team favored to be in the finals, was overwhelmed by the London Spitfire and the more chaotic approach to the game brought on by the recent meta shift.

The two teams in the inaugural Overwatch League finals both have incredibly strong DPS lines. Even when the Philadelphia Fusion and London Spitfire were both struggling, especially compared to their respective roster talent, the prowess of the Spitfire's Park "Profit" Joon-yeong and Kim "Birdring" Ji-hyeok along with the Fusion's Josue "Eqo" Corona and Lee "Carpe" Jae-hyeok was well known.

Despite the Fusion's inconsistencies, Carpe was still highlighted as a potential league MVP candidate even before his strong playoffs performances.

The once-ubiquitous Tracer has slipped into a situational pick, giving rise to double-sniper compositions with Widowmaker and Hanzo, the latter of which began to see more play in Stage 4 alongside the introduction to Brigitte. His rework has only made him more viable, and Hanzo has become part of a common two-pronged attack alongside another DPS, be it Widow for a sniper composition or a situational Pharah or other hero depending on map and enemy composition.

"I think this meta favors us because of our playstyle," Fusion support Alberto "Neptuno" González said following the Fusion's win over the NYXL. "We can switch heroes faster than [NYXL] do, multiple comps without switching DPSes." 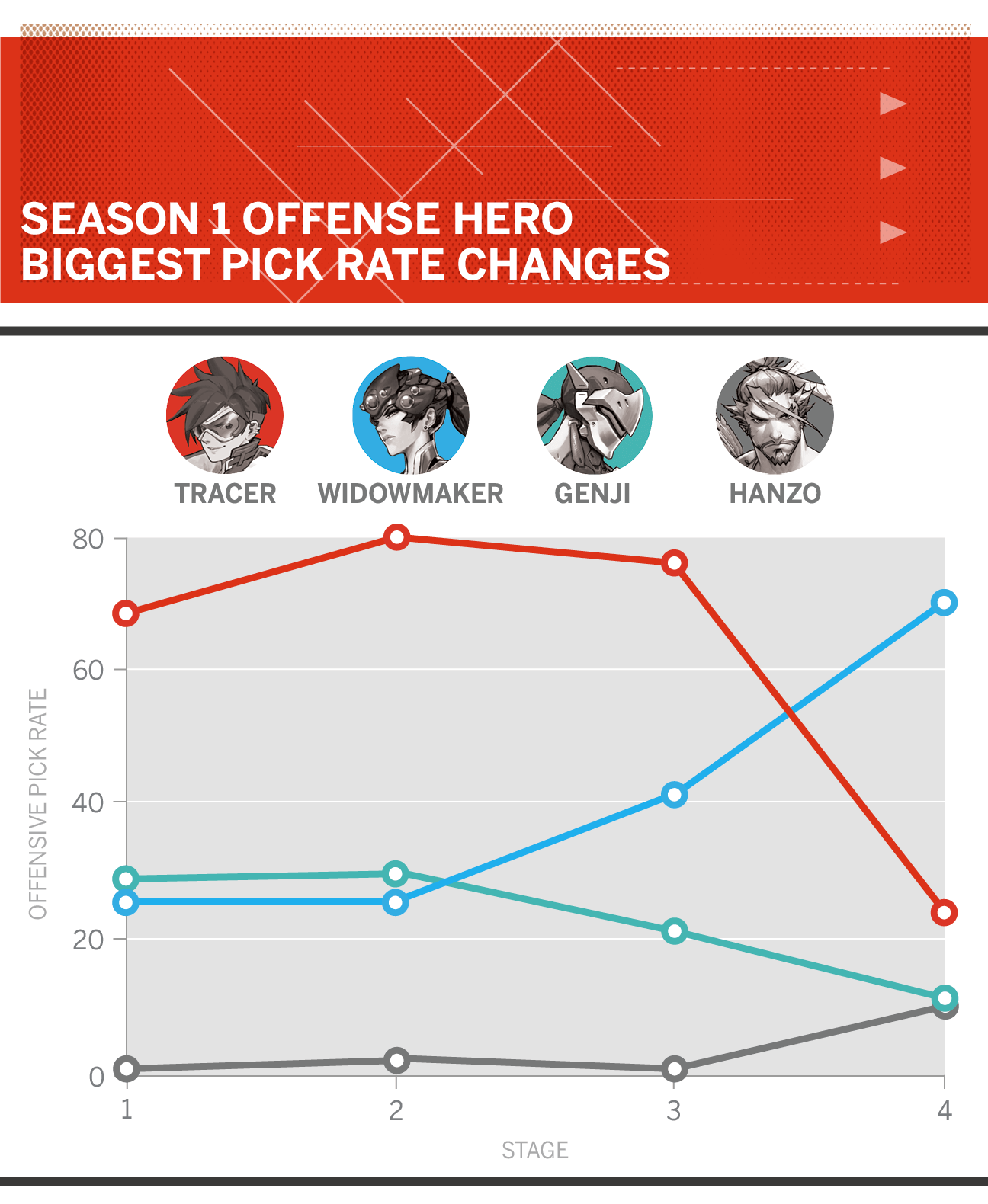 DPS players take center stage in this meta, but hero choices often depend on opponent picks, the map, which point or section of the map a team is on, and whether that team is on attack or defense. It sounds rudimentary, but the ability to flex between multiple heroes in response and gain advantages over an opponent's lineup is paramount. Both the Spitfire and the Fusion showcased strong flexibility and no hesitation when swapping heroes.

Although Widowmaker will still take center stage for Carpe and Birdring, we're likely to see a lot of different hero picks as both teams swap to adjust in game.

"When you have that one flex DPS player, it's easy to build off of that onto other guys," Spitfire support Kim "NUS" Jong-seok said. "So, 'If he does this, you do this,' and that's been our strategy, and it's become a part of our playstyle."

Hero flexibility isn't limited to DPS players. Flex supports Choi "Bdosin" Seung-tae of London and Isaac "Boombox" Charles of Philadelphia will be seen off of traditional Zenyatta pick at times in favor of Roadhog, Moira or even Tracer, which both flex players played in the playoffs (and were equally razzed by their teammates for their performances). 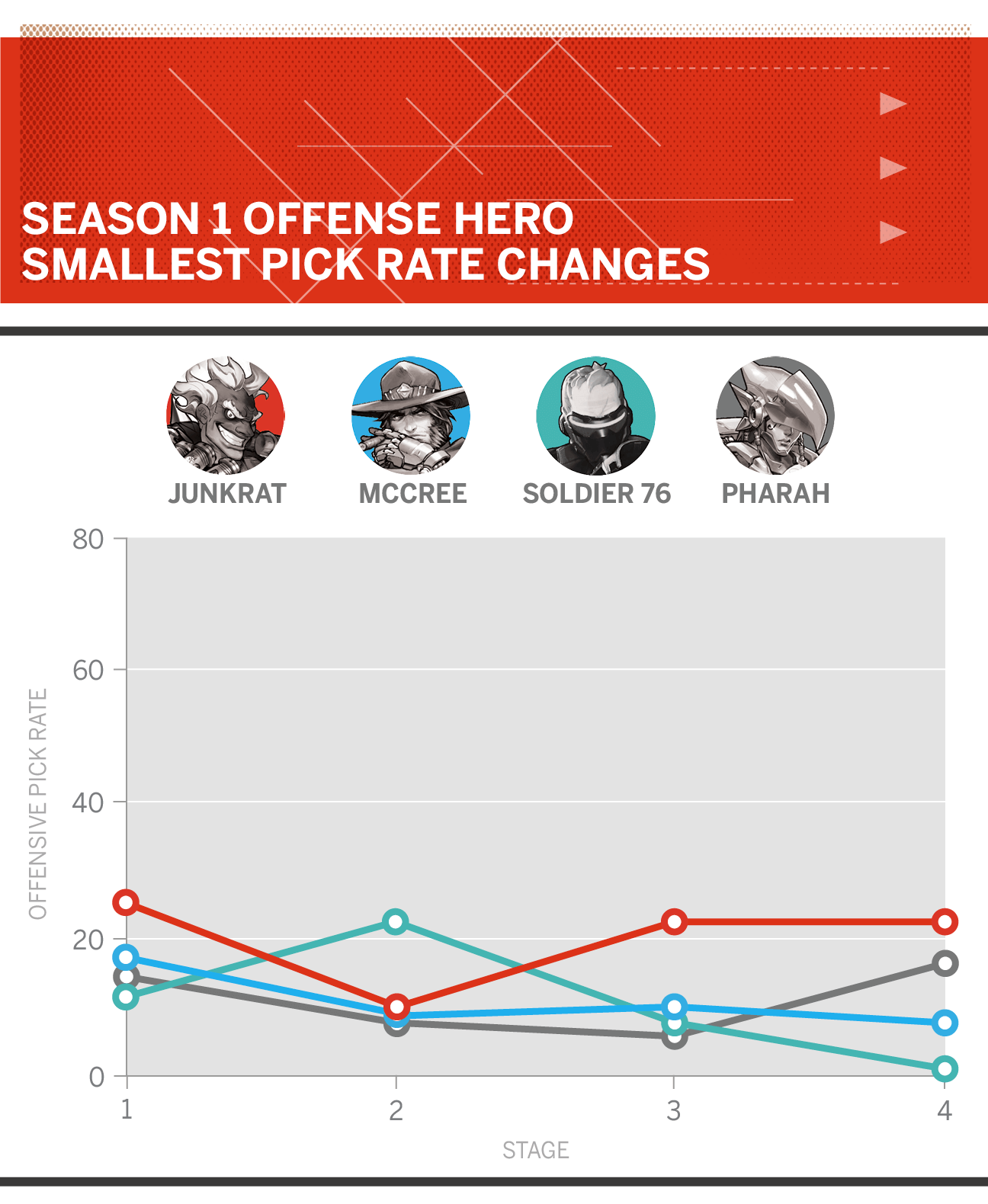 Even seemingly static positions like Mercy support, D.Va flex tank or main tank picks like Winston, Reinhardt and Orisa have had to change playstyles depending on composition or opponent's positioning. With a larger variety of DPS options and more attention than ever going to DPS players, tank and Mercy play also requires immediate in-game shifts.

Neptuno's skill with a "battle Mercy," a Mercy who's shooting enemies instead of healing allies, is his well-known default, but his strength in the playoffs has been in knowing when he can be that aggressive with the support of his team and his proactive DPS line. The Fusion's two D.Va players, Gael "Poko" Gouzerch and Choi "Hotba" Hong-joon, alongside the Spitfire's Kim "Fury" Joon-ho, have launched Self-Destruct after Self-Destruct to great effect in the playoffs.

"Formerly [D.Va] was about utilizing the robot of D.Va itself to fly around the map, scout, eat ultimates and shoot people down," Fury said. "But right now, D.Va is more centered around using Self Destruct properly, whether it's to get tempo off of your opponents and take it back for your team or just disrupting an enemy team's formation. That's the main difference after the meta shift."

The hero pick rates going into the upcoming finals may not be what they were for much of the season, especially regarding DPS heroes, but this points to just how flexible teams can be in the current meta. The Spitfire and Fusion both have explosive DPS lines that can play double sniper or swap to respond to opponents. Regardless of which team wins, given the aggression of these teams and their DPS players in particular, the inaugural Overwatch League finals will be explosive and, with constantly changing lineups, pretty unpredictable.