Four months later than originally scheduled, the quarterfinals of the 2019-20 Champions League will be played this week.

This season's campaign was brought to a standstill by the coronavirus pandemic back in March, with the round of 16 only half-finished before most of the world was suddenly placed on hold.

Now, with Barcelona, Bayern Munich, Lyon and Manchester City progressing after the outstanding second legs were wrapped up last week, we're embarking on an unprecedented mini-tournament in Portugal to crown the European champions.

It's been a while, so a little refresher is required of the more noteworthy moments to have graced this season's Champions League before the whole thing fell silent for almost 150 days. And we're not even talking of events surrounding the competition, like UEFA telling us how we've been incorrectly saying names like Xherdan Shaqiri, Joao Felix and Kevin De Bruyne this whole time or how Lionel Messi took his time but confirmed he had accepted an invitation to dinner with Cristiano Ronaldo. 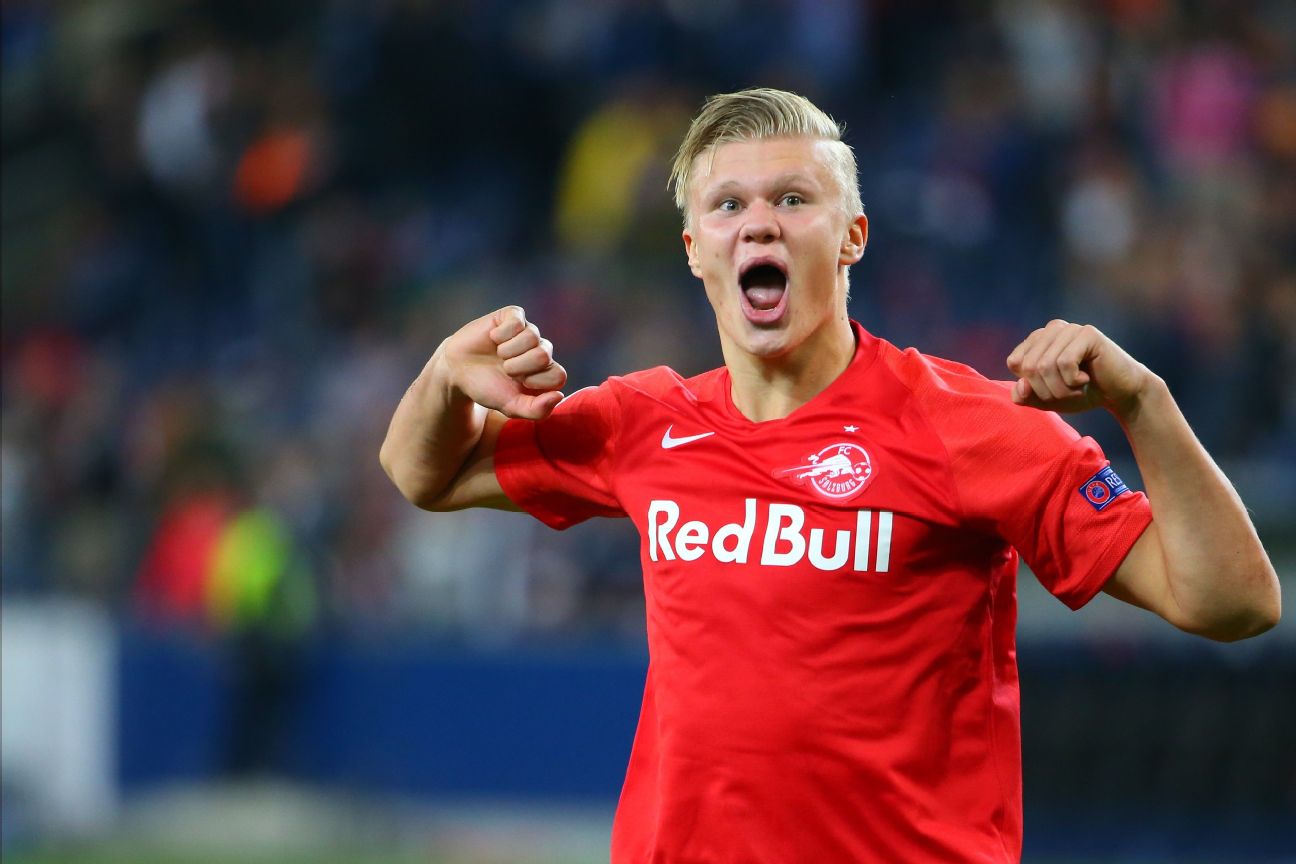 Having made a name for himself by scoring nine goals in one match for Norway at the U20 World Cup, Erling Haaland firmly announced his arrival on the Champions League scene in September with a record-breaking hat trick for FC Salzburg against Genk.

Aged just 19 and 58 days, Haaland converted his first three shots on his competition debut, the first coming after just two minutes in what became a 6-2 canter of a win for Salzburg.

Already his third treble of the season, Haaland's goals saw him become the third-youngest player (behind Raul and Wayne Rooney) to score a Champions League hat trick and the eighth player overall to do so on his debut.

The striker began the day having scored 14 goals in nine appearances for Salzburg (including another hat trick in his previous appearance) in what quickly became an incredibly prodigious breakthrough season for the youngster.

Indeed, Haaland's meteoric form continued in the Champions League with a goal against Liverpool in his very next outing, followed by another four goals in three group-stage games. And he was just getting started... 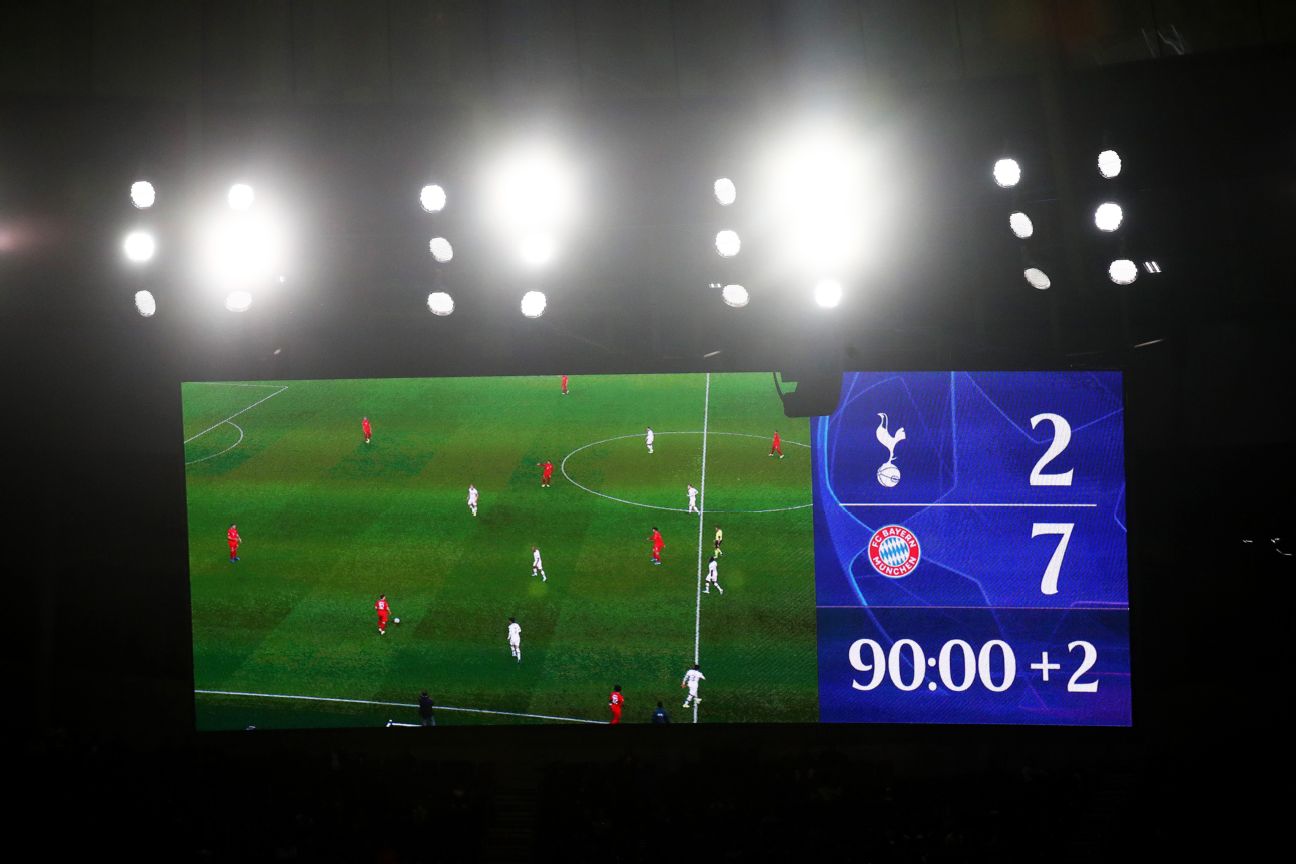 It's amazing to think that Tottenham Hotspur's 7-2 humbling on their own patch at the hand of Bayern Munich was this same season, but we assure you it was.

The only crumbs of consolation on offer from a Spurs perspective were that, 1) their local rivals Arsenal didn't fare much better against Bayern , and 2) the result wasn't *quite* bad enough to be the biggest thrashing ever doled out in the Champions League.

Not including the preliminary rounds of the competition, the biggest margin of victory ever amassed in the Champions League is 8-0, with both Liverpool and Real Madrid amassing that scoreline against Besiktas and Malmo respectively.

Meanwhile, the most goals ever scored in a single Champions League match is still 12, namely Borussia Dortmund's ridiculous 8-4 win over Legia Warsaw in 2016.

Raheem Sterling once again wrote his name into the history books with a ferociously fast hat trick racked up in Manchester City's 5-1 demolition of Atalanta, which came eons ago in October.

The forward took just 11 minutes to complete this treble as City roared back from a goal down to win comfortably at the Etihad.

Sterling's effort went straight into the top three of the quickest Champions League hat-tricks ever scored, beaten only by Mike Newell of Blackburn Rovers (9 minutes) and Bafetimbi Gomis (8 minutes) of Lyon for speed. 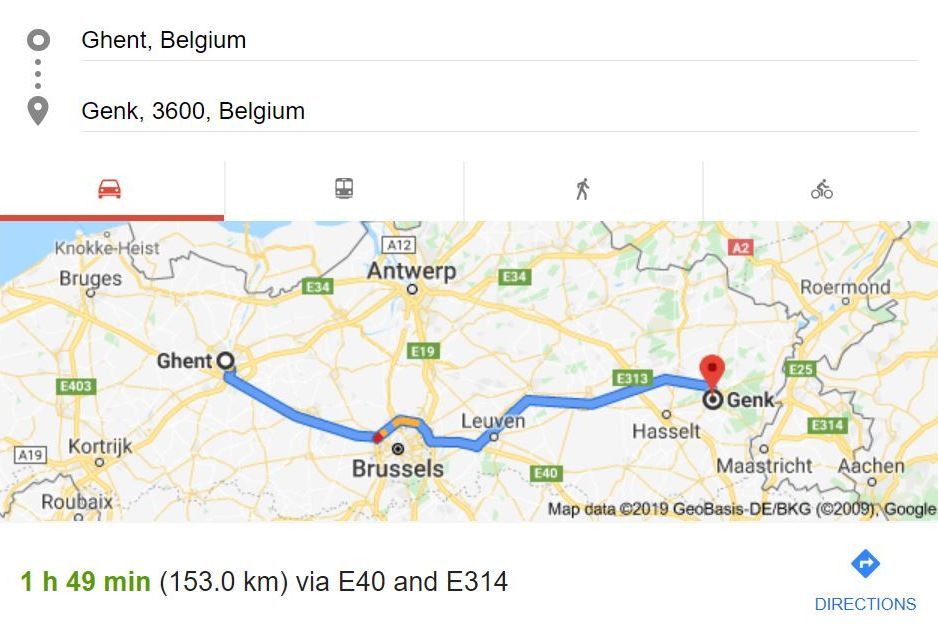 The supporters made the unfortunate mistake of mixing up Genk with Gent, leading them to turn up to watch Liverpool's 4-1 win in a town some 150 kilometres from the stadium on the opposite side of the country.

To help ease the pain of the away day gone awry, Genk decided to invite the two fans back as VIPs for a Belgian First Division game a couple of months later.

Their opposition on the day? Why, it was Gent, of course!

Walker joined the exclusive club of outfield players who have had to go in goal when Manchester City suddenly found themselves keeper-less in the latter stages of their group stage game against Atalanta.

The right-back even did a job on the night, making more saves (1) than Ederson and Claudio Bravo (both 0) during the trio's respective stints between the sticks as City held on to a 1-1 draw at the San Siro. 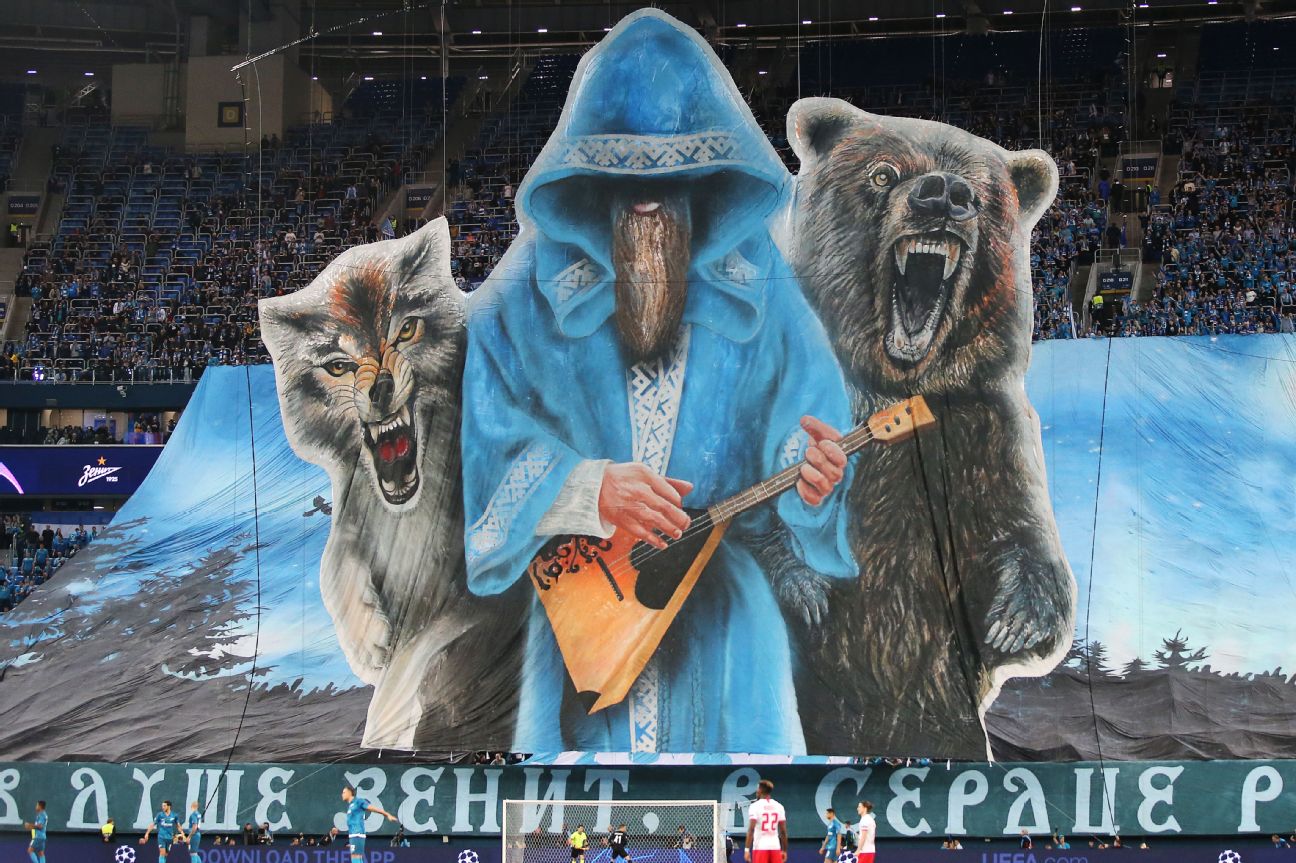 Zenit St Petersburg wrapped up the best tifo of the season award (in what was a very competitive field this season) as early as their group stage tie against RB Leipzig in November.

With the remainder of the competition being played behind closed doors, it's unlikely that any club is going to beat Zenit's gigantic mystical scene complete with bears, wolves, a balalaika-playing druid and the rousing motto: "Zenit in our mind, Russia in our heart."

Jose Mourinho at Tottenham is a new man 🙌pic.twitter.com/rwR8dMAPyo

Following a decisive 4-2 win over Olympiakos in his first home match in charge of Tottenham, Jose Mourinho made sure to thank the person he deemed responsible for dragging Spurs into the knockout phase.

The Portuguese coach was full of praise for the "intelligent" ball boy whose quick thinking led to Spurs' crucial equaliser.

"This kid today was brilliant. He reads the game, understands the game and made an important assist," Mourinho beamed after the game.

Having scored twice in the dramatic comeback victory, we can only imagine Harry Kane was more than a little disappointed to see the "Man of the Match" accolades go elsewhere. 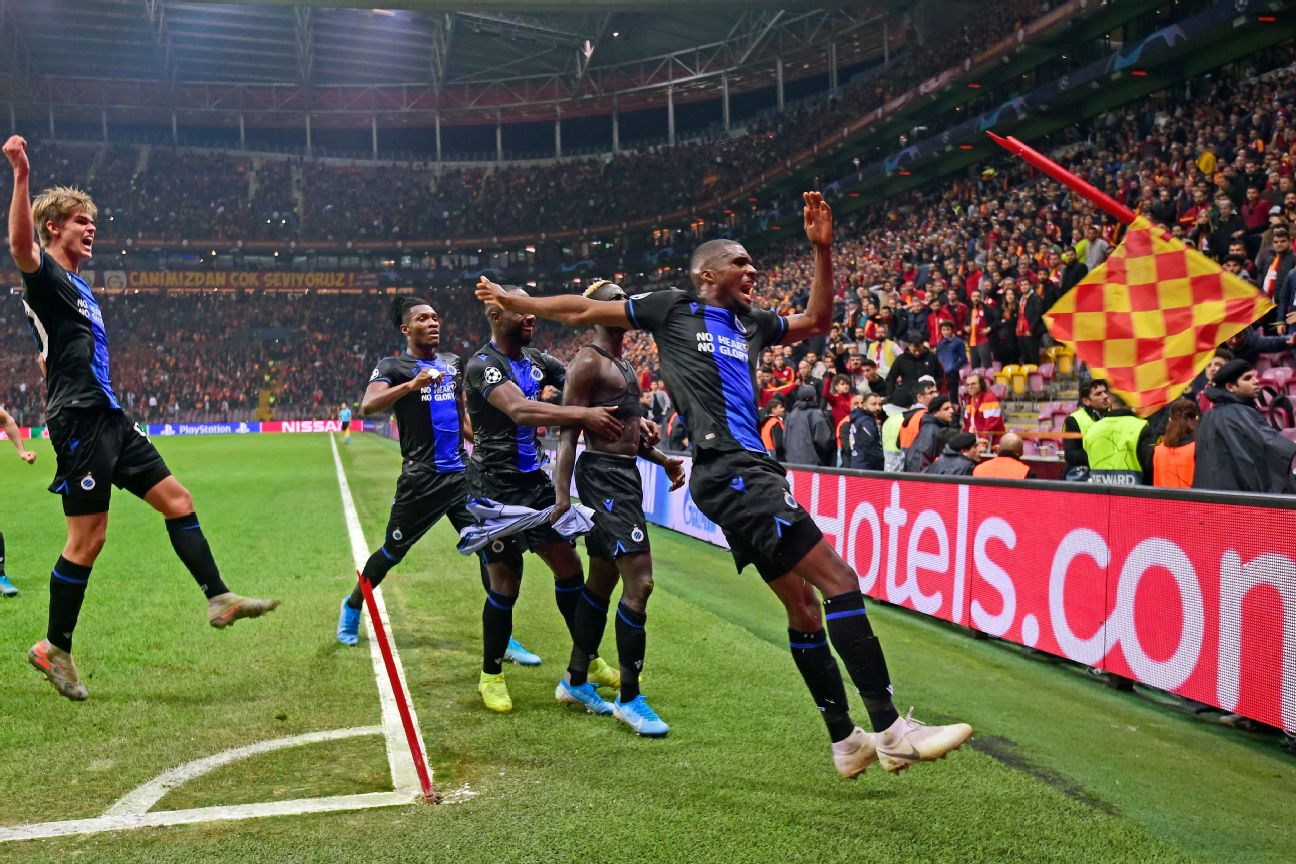 Club Bruges were so psyched after plundering an equaliser against Galatasaray in the 92nd minute that they managed to have two men sent off between then and the final whistle.

Goal scorer Krepin Diatta was dismissed for removing his shirt, having seemingly forgotten that he'd already been booked earlier in the game.

He was then followed off by Clinton Mata, who kicked a corner flag so hard it broke in half -- earning himself a second caution in the process.

Thankfully, Bruge just about managed to regain their composure as they held on to see out the 1-1 draw. 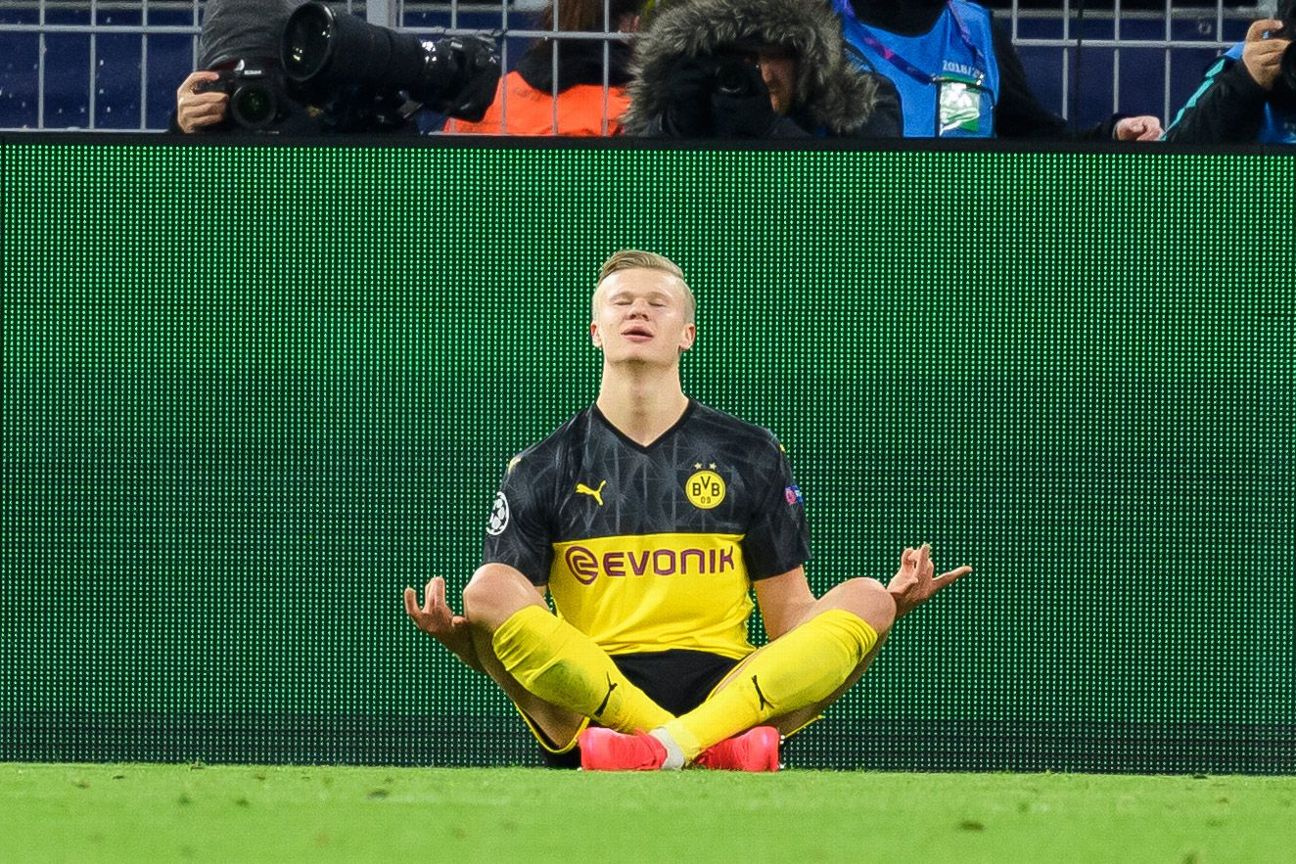 After scoring eight times for Salzburg in the first phase of the tournament, Haaland made a €20m switch to Borussia Dortmund. He continued to wreak havoc in the round of 16, scoring twice in a 2-1 first-leg victory over PSG and celebrating with a meditative "zen" pose.

Haaland paid the price for his hubris in the second leg as goals from Neymar and Juan Bernat saw PSG turn the tie on its head and send Dortmund packing.

No prizes for guessing how the Parisians decided to celebrate en masse afterward. 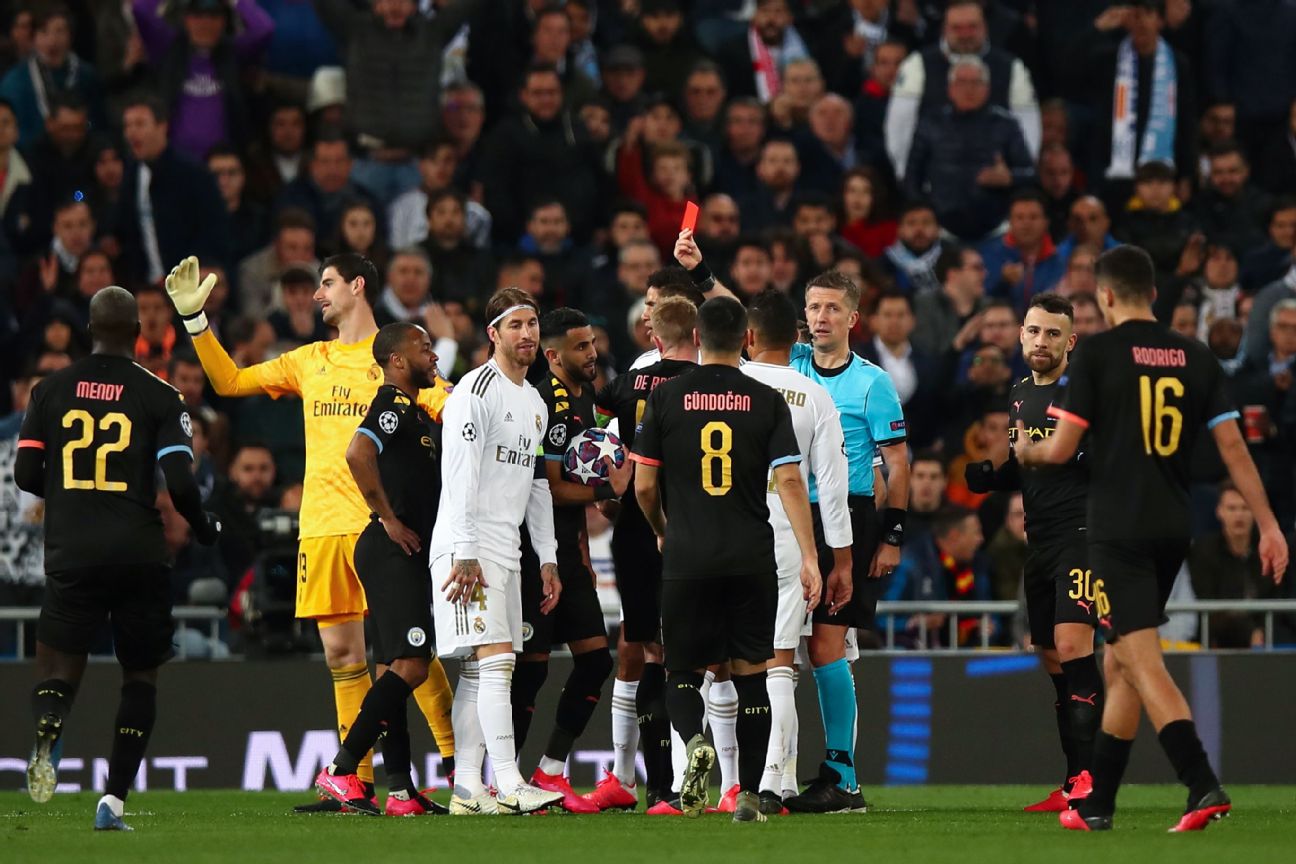 Real Madrid suffered a bad day at the office when Manchester City came to the Bernabeu for the first leg of their Champions League round-of-16 tie all the way back in March.

The hosts lost 2-1 and found themselves reduced to 10 men for the latter stages of the game after captain Sergio Ramos picked up the 26th red card of his career (which is a lot, but nowhere near the world record held by a man known as "The Beast").

It was also Ramos' fourth dismissal in the Champions League, thus equalling a record co-held by Zlatan Ibrahimovic and Edgar Davids.

As such, the Real stalwart was forced to watch from the stands during the return leg at the Etihad last week as City once again ran out 2-1 winners to knock Los Blancos out of the running.

While Ronaldo and Messi have made a habit of breaking Champions League records for fun, the twin titans saw one of their feats matched by a plucky underdog.

Josip Ilicic was able to rub shoulders with the modern greats when the Slovenian striker scored four goals in Atalanta's outstanding 4-3 win over Valencia.

Having also scored once in the first leg in Italy, Ilicic became the only player not named Cristiano or Lionel to score five goals in a single Champions League knockout tie.

By winning 8-4 on aggregate, Atalanta also became the first competition debutants to go striding straight through into the quarterfinals since Leicester City in 2016-17.