SOUTH BEND, Ind. -- At least for an afternoon, it felt as nothing had changed for Notre Dame. The Fighting Irish went on the road before Thanksgiving and beat a ranked opponent. A player rated among the best in her class out of high school was instrumental.

Except very little is the same this season. Start with Notre Dame entering that game at Michigan an underdog, unranked for the first time in 12 years. Then consider that while Destinee Walker scored 27 points. The graduate transfer is not an All-American, but she is simply happy to be on the court again after missing nearly two and a half seasons with injuries.

No, this isn't the same old winter in South Bend.

As Notre Dame renews its rivalry with UConn on Sunday (ESPN, 4 p.m. ET), it is closer to .500 than to its customary place in the top five. This is unfamiliar territory for a program that reached the Final Four in seven of the past nine seasons. Much of the most recent success was built around a recruiting class that arrived in 2015, built around the skill and bravado of Arike Ogunbowale and Marina Mabrey. Their presence explained the success. The void they left explains the current uncertainty and even threatens to define this season.

Yet there is no time like the present for Walker, the last member of the 2015 recruiting class to put on a Notre Dame uniform. The Fighting Irish hope that is the sentiment that defines their season.

"I feel like I'm getting back to my old self," Walker said a few days after the Michigan game last month. "And I feel like this team has so much to offer." 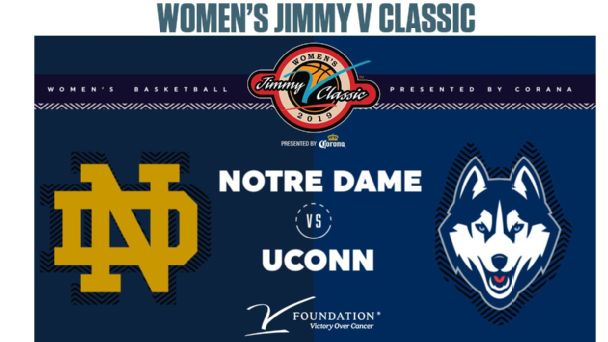 The game is part of V Week from Dec. 3-14. Donate to the V Foundation for Cancer Research.

Walker's arrival in South Bend was delayed more than four years; the high schooler never took the recruiting visit to South Bend that she originally planned. Muffet McGraw had hoped to land the guard from Orlando ranked 17th in her class by HoopGurlz. The Notre Dame coach recalled a positive recruiting visit to see Walker and her mom, Sharon. But after taking four of her five allowed campus visits, with Notre Dame scheduled to be the fifth, Walker committed to North Carolina.

While the Tar Heels struggled that first season, Walker did not. She started 31 games and averaged 13.9 points to earn all-freshman honors in the ACC -- as did Ogunbowale. But that success started to unravel midway through Walker's sophomore season as a right knee injury required surgery and forced her to miss the final 11 games. Physical therapy dragged on throughout the subsequent season, pushing potential return dates back until she missed the entire campaign.

Finally back to full health as preseason arrived a year ago, her fourth in Chapel Hill, Walker couldn't wait to get back on the court. She was so eager, in fact, that she believes it cost her. Going all out early in practice, she sustained a labral tear in her right hip. She tried to play through the injury with treatment, but after struggling through limited minutes in a handful of games, she listened to her body -- at the expense of another season on the court.

Life didn't stop during that time, of course. Walker graduated with a degree in journalism, grateful in some ways for the extra time to focus on those demands.

"It helped me with my career," Walker said. "But you miss basketball a lot. I was doing everything with the team, but I couldn't play and I couldn't practice."

With her degree in hand and feeling her time in Chapel Hill had reached a natural conclusion with the rest of her class either graduating or transferring amid the tumultuous spring that led to Sylvia Hatchell's resignation, Walker sought a fresh start as one of the increasing number of graduate transfers nationwide. It was still at least a small surprise when she got a phone call from McGraw after last season. The Notre Dame coach saw Walker's name in the transfer portal and wanted to know if she had any interest in finally making that recruiting visit to South Bend.

McGraw hoped to turn to the class of 2015 one more time (or twice, as turned out, after Marta Sniezek -- No. 38 in the 2015 rankings -- arrived as a graduate transfer from Stanford).

McGraw fought a rear guard action against attrition for some time. Once Ali Patberg, ranked No. 13 in that 2015 class, redshirted as a true freshman at Notre Dame, the program seemed to have a bridge to carry it through the season after Ogunbowale and Mabrey (eventually joined by Jessica Shepard, No. 3 in 2015). With Patberg and Jackie Young still in a projected backcourt for the 2019-20 season, the program would make a smooth transition between eras.

But then Patberg transferred to Indiana prior to the 2017-18 season. And Young, following in the footsteps of Jewell Loyd, entered the WNBA draft with a season of eligibility remaining. All five of Notre Dame's starters for 2018-19 were selected among the first 19 picks in April's WNBA draft.

"We don't really over-recruit," McGraw said of the tendency of some schools to recruit large rosters that both anticipate and demand attrition. "We recruit for somebody that's going to play three years at least, if not four. So that was our future. Ali Patberg was definitely the future point guard that we wanted. It was disappointing when she left. It's kind of set us back. Marina had to end up playing the point, which actually worked out pretty well for us. But we've just been kind of off in our numbers since then. Certainly we expected Jackie to be here.

"So now to look at what we thought we would have, and then to see how it worked out, it's very different."

Factor in injuries to Abby Prohaska and Mikayla Vaughn, returnees who represented at least a semblance of continuity, and Notre Dame is very much a work in progress. Before a recent practice, McGraw said all the right things about enjoying the teaching. She loves puzzles, after all, and this one is a doozy. After that same practice, which she halted repeatedly to make increasingly exasperated corrections, she sat down again wearing an exhausted expression. It has been a long time since basketball at Notre Dame was this much of an introductory seminar.

"What this team's identity is, we still haven't figured that out yet," McGraw said. "Where at least the past couple of years, I mean, you almost were trying to keep them from getting bored at practice. Try to keep it interesting, try to go short and intense, make things fun. Now I'm working, teaching. ... We're still learning so many things."

Most games, Walker plays almost as many minutes, in fact, as she played in total during those thousand lost days while injured. Initially hesitant in her play, lest her body fail her again, it is a sign of how far she has come that she is second on the team in free throw attempts.

"I think she's getting better every game," McGraw said before Thanksgiving. "She's putting it on the floor and driving it a little bit more. And defensively, she's really, really good."

It's not a coincidence that Notre Dame's best days, including the win against Michigan and another against ranked USF, came when she played well. And it's not a surprise that after all that time out of action, there will be both good days and bad days for all involved.

This might not be a cameo for Walker. Because she played so sparingly for the Tar Heels a season ago while dealing with the hip injury, she will apply for a sixth year of eligibility and hopes to return to Notre Dame next season. That's when one of the nation's top-rated recruiting classes will join current freshmen Sam Brunelle and Anaya Peoples as the core of a new era.

Squeezed between past and future, this will be a different kind of season. Perhaps it need not be a lost season. It isn't for Walker, who finally found her way to Notre Dame.