Hitting in the big leagues is so difficult, Robinson Cano believes, that you cannot overwhelm yourself with fretful thoughts. Rather, you need to make sure to do what you need to do to have fun, and he told New York Mets teammate Pete Alonso this during Alonso's rookie season.

Alonso replied earnestly, "OK, Professor," and Cano loved that -- a young player was willing to listen and absorb, and Cano offered other thoughts from time to time. Like when Alonso was closing in on Aaron Judge's rookie home run record and Cano thought he was pressing. 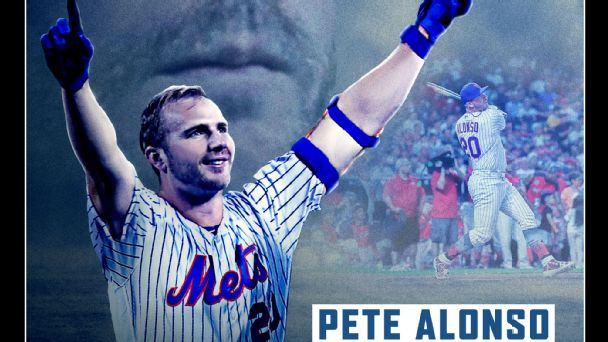 From dealing with bullies to proving naysayers wrong about his abilities, Mets first baseman Pete Alonso had to beat the odds at every level. Watch: Sunday, 5 p.m. ET on ESPN

"He was three, four home runs away, and he was really struggling," Cano recalled. "He was swinging at anything close, even on the ground. I said, 'Bro, you got to relax. Listen, you want to hit a home run, come and talk to me.' He said, 'OK, Professor, tell me.'"

Alonso remembered this conversation and a comment made by another teammate. "So that kind of helped me back off," Alonso said. "Jake deGrom was like, 'Were you nervous?' I'm like, 'No, what do you mean I was nervous?' And he said, 'Because you were swinging sometimes when the pitcher hadn't even let go of the ball.'"

So thereafter, Cano would tell Alonso how he was going to be pitched, with predicted sequencing and location. "Just be ready," Cano remembered informing Alonso. "Boom, he hit a home run. He came to me, he's like, 'Professor!'"

In the days that followed, Cano said, they went through the same routine, the professor telling the student how he would be pitched, and Alonso tied Judge's record. On the next-to-last day of the season, Alonso was set to face Mike Foltynewicz of the Braves, who pitched well in the second half last season and thrived with hard stuff. "I said, 'Listen, this guy is going to challenge you with the fast one,'" Cano recalled. "'Just be ready because he's going to throw hard. At some point, he's going to throw a fastball' -- and that's exactly what he pitched."

When Alonso came around to home plate after his record-setting homer, he met Cano, who was about to bat, with a hug and said, "I love you, man."

Cano remembered, "And that was pretty special. It's something that as a kid, I don't think anybody would have dreamed he hit 53 home runs. You always dream about at least having a great year, hitting 30 home runs. So that was something really special. It was great to have that moment."

We heard a lot of Pete Alonso stories doing our preparation for the E:60 on the Mets' first baseman. Here are a few others:

Continue reading this article and more from top writers, for only $6.99/mo.