WASHINGTON -- The dawn of the robot umpire is near, and it is time. Game 5 of the World Series exemplified this. Plate umpire Lance Barksdale actually called a decent game by the current standards for umpires, but the combination of an untimely blown call and a hot-mic video of his rationale behind another poor judgment illustrated why automated balls and strikes must be part of baseball's future sooner than later.

Nobody in the Washington Nationals clubhouse would say as much on the record, not after their third consecutive loss, a 7-1 clubbing by the Houston Astros, who took a 3-2 series lead and now have two chances to clinch a championship at home. There is baseball left, and so long as there is baseball left, no player will dare draw the ire of the fallible men with disproportionate control of the game. But one player acknowledged that Game 5 changed his mind about a computerized strike zone -- that having witnessed a bad call rob the Nationals of a potential game-tying opportunity, the arguments in favor of technology over eyeballs are simply too compelling.

"I was against it until now," he said.

The call in question came in the seventh inning. The Astros led 4-1. There were two outs, and Ryan Zimmerman stood on first. He was there after taking a full-count pitch that Astros starter Gerrit Cole and Martin Maldonado thought was an inning-ending strike. Cole went full again and threw Victor Robles a slider. Robles saw it tilt off the plate. Barksdale punched him out anyway.

"We all make mistakes," Robles said. "I felt like he might have made a mistake on that pitch, but that's part of being human, human nature."

The logic behind human over technology crumbles upon even the simplest critical analysis. If a system exists that tracks balls and strikes not just accurately but also, more importantly, consistently -- it does not yet, but it is close enough to become a reality over the next few years -- then why stick with something inferior? Barksdale and his peers do incredible work, given their innate flaws -- their humanity. The question for baseball is if the romance of that humanity is more important than right vs. wrong.

Can you trust robot umps? 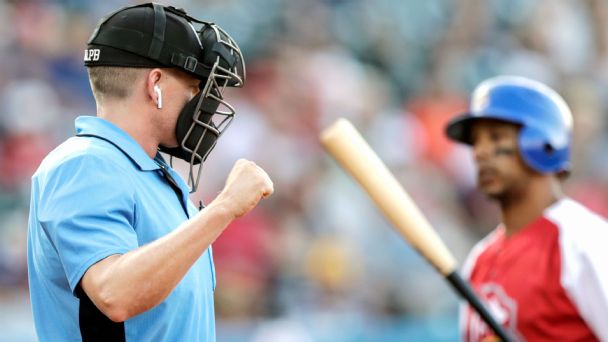 We headed to an Atlantic League game between the York Revolution and the Somerset Patriots to see baseball's experimental new rules in action. Eddie Matz »

It really is that simple, that binary. A ball is a pitch outside of the strike zone. A strike is a pitch inside the strike zone. There is no gray area, no ball one time and strike another. This makes automated balls and strikes the perfect sort of system to institute -- not one that is up for interpretation, one that can be tricked or fooled, or one that necessitates sleight of hand. A ball is a ball, and a strike is a strike like grass is green and sky is blue.

Or it should be. But it wasn't an inning before the Robles strikeout. Nationals reliever Tanner Rainey delivered a perfect 2-2 pitch to Michael Brantley: inside corner, 99 mph, paint. Catcher Yan Gomes caught it and stood up to throw the ball around the horn. Barksdale was silent. Gomes had come out of his crouch too quickly. He didn't hold the ball there for Barksdale to see it. So even though the pitch went through the strike zone, the presentation of the pitch made it a ball, which is some galaxy-brain stuff.

The Washington Nationals are World Series champs! Here's everything you need to know about their run to the title. Full coverage »

• Miller: How will the Nationals be remembered? As giant slayers

• The seventh inning that shocked Houston and made the Nats champions

• Astros a great team that fell short of true greatness

Thankfully, baseball's technological advances do not stop with the pitch tracking that confirmed this one was a strike. There are also on-field microphones that catch the interactions among players and umpires, and the one between Barksdale and Gomes was a doozy that ended with Gomes looking back at Barksdale and saying, "My fault?" as if he had somehow magically made the ball that zipped through the strike zone appear out of it. Rainey escaped the inning on the next pitch. That didn't prevent Nationals manager Dave Martinez from expressing his ire between innings.

"C'mon, Lance!" a mic caught Martinez yelling from the dugout. "It's the World Series! Wake up!"

Following the game, a far calmer Martinez said: "I will not ever sit here and criticize an umpire. I have known Lance for a very long time, and he is really good. And that is all I'm going to say about it. I'm not going to sit here -- I know there was some choice words, but that is just in the heat of the moment." That is reasonable. But his criticism wasn't wrong. When true, unbridled consistency is an option, rather than a figment of the imagination, anything short of that feels insufficient.

That's what makes glamorizing the human element such a farce. Just because the game itself is full of errors shouldn't give leeway to its arbiters to be judged by that standard. Baseball is an extraordinarily fast game -- so fast that umpires should have assistance. Technology has made their jobs even more difficult, exposing them when they miss a call and airing their conversations about those missed calls. Automated balls and strikes are their savior, not their enemy.

Now, a caveat: As the beta testing in the Arizona Fall League this month has shown, the robot ump needs work -- a lot of work. Breaking balls in the dirt that cut through a fraction of the three-dimensional zone have been called strikes. They look ridiculous. Hitters think they're ridiculous. Even the pitchers themselves think they're ridiculous. Before a wider institution of the automated system, Major League Baseball will need to redefine the strike zone, something that has been done before but always runs the risk of poison by unintended consequences.

Of course, that's what the minor leagues are for. To test. To iterate. To perfect. To get this ready for the show. Currently, MLB and the umpires' union are negotiating a new labor contract. An automated strike zone belongs in the center of the discussions. Umpires understand how instant replay has been beneficial to them. Taking balls and strikes out of their hands would be even more so.

Yes, it would get rid of the "Ump, you suck!" chant that pervaded the stadium during Game 5. "Robot, you suck!" just doesn't sound as good. Gone, too, would be squabbling and the tussles and the manager-umpire arguments, but the truth is, most of that has vanished already. Baseball in 2019 is sanitized to the point that confrontations are an anachronism. You argue balls and strikes, you get run from the game. Simple as that.

The blown ball or strike call is fading away as well. Because whether it's two or three or four years from now, home plate in the World Series is going to be run by a computer feeding a call into a set of earbuds worn by the person in blue standing behind home plate.

Robot umpires are coming. Too late for the Nationals, but they're coming.