Those are some of the words scouts and opposing pitchers used when asked about a Chicago Cubs offense that sits dead last in the majors in many categories, including a .192 team batting average that's among the all-time worst through 15 games.

What's most confusing is that the most foundational part of being a major league hitter has the Cubs turned upside down: simply handling a fastball.

"It's almost mind-boggling," one AL Central scout said. "There's too much talent on that whole damn Cubs team. No one can figure it out. I've talked to a bunch of guys [other scouts]."

There was a time when throwing the Cubs a fastball was a bad idea. From 2016 to 2018, the combination of Javy Baez, Anthony Rizzo and Kris Bryant hit .307 with a .559 slugging percentage against fastballs. But the numbers have steadily dropped since then, culminating in a .235 batting average and just a .419 slugging percentage over their past 75 games (the shortened 2020 season and first 15 games of this year).

As a team the Cubs have an MLB-worst .230 batting average and are slugging just .414 off fastballs in that time frame. Against fastballs of 95 mph or more, they're hitting a paltry .178 since the start of 2020 and just .105 this season.

"It's not the lack of bat speed," one NL East scout said. "These guys all have awesome bat speed. It's mental."

While theories differed among scouts, the consensus explanation is Cubs hitters have been caught "in between." Perhaps they're worried about chasing pitches with a lot of spin -- a recent problem as well -- so they aren't reacting to fastballs like they used to.

"They should be able to catch up to fastballs, and for some reason they are not," an NL East scout who saw them recently said. "Are they using analytic tendencies too much? So, in a game they expect one thing but the opposition is doing something else?"

Normally 15 games isn't enough to glean much of anything in baseball, but the Cubs are no longer getting the benefit of the doubt -- not from opposing pitchers, scouts or even many fans. Not after years of disappointment since former team executive Theo Epstein famously declared their offense "broken" back in 2018. For all of the movement elsewhere in the franchise, five of the eight primary position players still remain from the Cubs' World Series victory a half-decade ago.

"They're trying to change their philosophy, but with this core group, they had one philosophy and all these guys bought into it," one scout opined. "It's turned into a one-dimensional offense. There's something to be said about contact and putting the ball in play."

Due to that one dangerous dimension -- the ability to hit the ball out of the park -- the opposition has consistently pitched the Cubs out of the strike zone. Since 2016, they've seen the lowest proportion of strikes, just 47.9%, of any team in the National League. For a while, they took advantage of it, ranking fourth best in chase percentage in 2016 while leading the majors in walks. 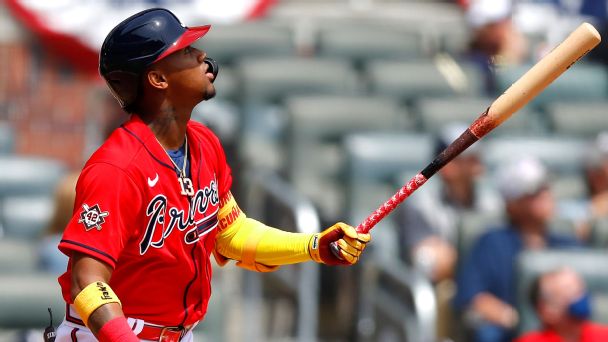 Baseball is here! Catch the 2021 MLB season on ESPN and the ESPN App.

Sunday, May 9
Phillies-Braves 7 ET on ESPN

Perhaps those hitters became a little overconfident or the league simply figured them out, but they began to chase.

The Cubs went from fourth to 19th to 25th and then 23rd in chase percentage over the span of four seasons.

"The perfect example is Javy Baez," one scout said. "I remember when he got to the big leagues and he had no clue what the strike zone was. Then he got better. Then I saw him last year and it was like the old Baez is back."

Baez is an extreme example, but the sentiment held true for the offense as a group.

"Throw them up and in and then down and away," one opposing pitcher said. "That's what you do with any hitter, but especially the Cubs."

And that's where the Cubs are unique compared to other teams: The majority of their hitters can be pitched to in the same manner because their strengths and weaknesses are very much alike, according to those in the game.

"They're down-ball hitters," an opposing pitcher said. "All of them. Just don't throw a mistake down there. Even David Bote, who's relatively new, likes it there."

This year alone Bote, Baez and Bryant have golfed balls into the stands for home runs. In last year's postseason, the Miami Marlins shut the Cubs down by straying away from that hot zone. 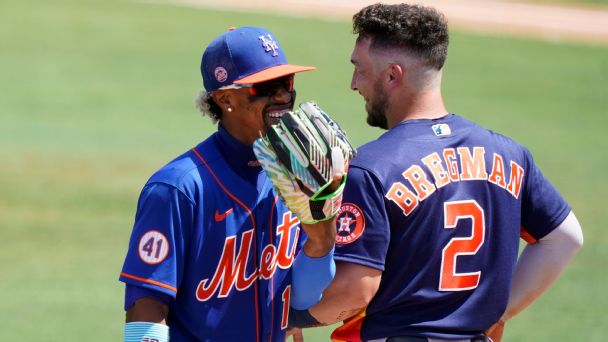 Which teams will surprise or disappoint? Who will be this year's must-watch players? We asked baseball insiders to weigh in. Jesse Rogers

"Don't let them extend their arms," another opposing pitcher said. "Everyone but Rizzo is the same. You can jam them. All the righties and even Jason Heyward from the left side."

Perhaps the up-and-in approach is the reason the Cubs have been hit by more pitches than any other team. Most hit-by-pitches with the lowest team batting average is a tough way to produce offense.

"Teams are throwing more up in the zone, from the games I saw," said a scout who saw the Cubs' first six games this season. "Guys are overswinging. Trying to do too much. Everyone is trying to get the whole team out of a slump, so they look like they're pressing."

With Jacob deGrom and Brandon Woodruff on the docket later this week, things aren't going to get easier anytime soon. And all this is happening in a season when Baez, Bryant, Rizzo, Joc Pederson and others are set to become free agents. Any of them could be traded come July.

"It's got to be in the back of their minds, they're going to break up the team," one scout said. "Everyone knows it's totally going to be different next year."

Those in the game do agree on one thing about this season's lineup: The parts are better than the sum. One opposing pitcher summed it up with a comparison of the Cubs of 2016, and the Cubs of now:

"They don't grind you out the way they used to. It's just an easier lineup to pitch to."