The mini-middleweight tournament is over, and after Robert Whittaker dominated Kelvin Gastelum on Saturday night, he's likely to be the next foe for Israel Adesanya. Whittaker offered a complete performance against one of the toughest fighters in the sport, earning his third straight win since he lost his title to Adesanya in 2019. Now, he appears to be ready to once again fight for the gold.

But before Whittaker made his walk, Tracy Cortez made hers. While weigh-in challenges have remained, Cortez has shown great talent in the Octagon. Is she on the path to being ranked?

The debate, the race, the tournament, the whatever you want to call it to determine the No. 1 middleweight contender is officially over. The winner: Robert Whittaker.

Truth be told, he already had this locked up. His two wins over Darren Till and Jared Cannonier last year were likely enough. But, in case someone thought it should be someone else -- mainly Marvin Vettori or Derek Brunson -- he ended all of that Saturday night. 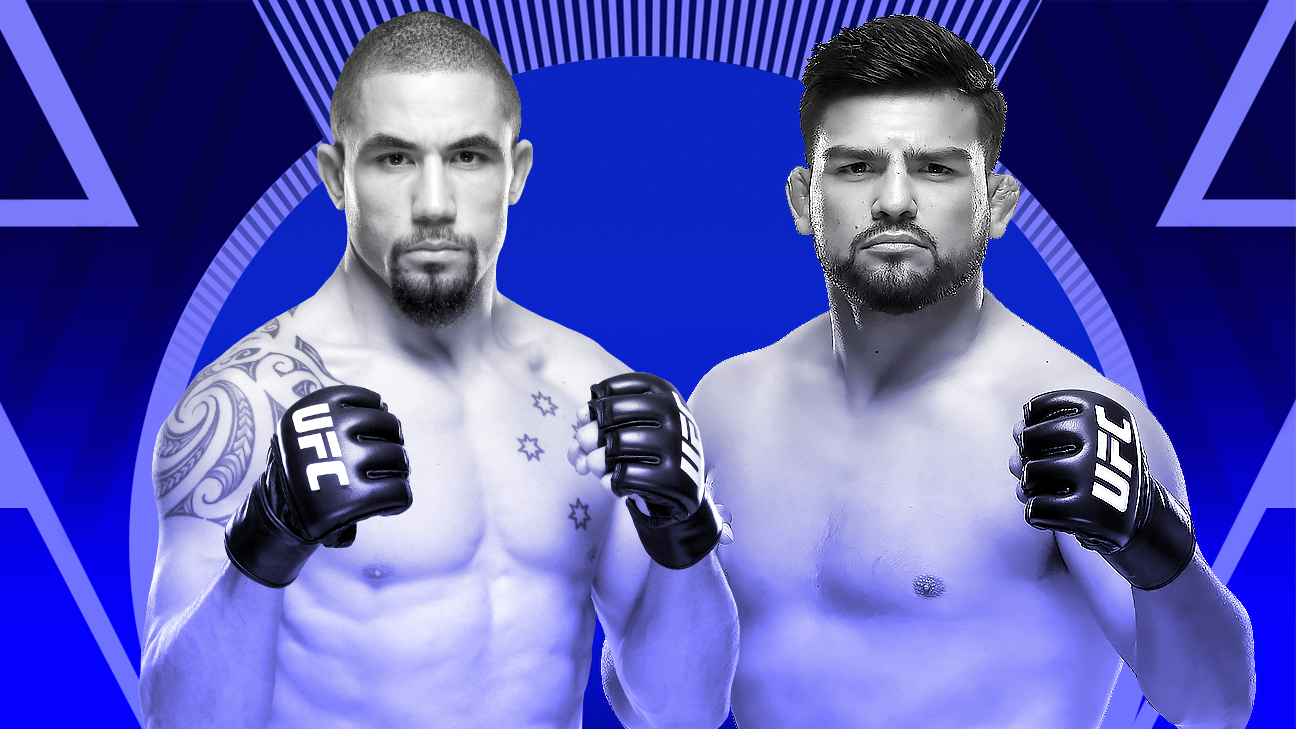 All fights from UFC Fight Night: Whittaker vs. Gastelum will be available to watch on ESPN+.

Watch the complete card on ESPN+

Whittaker once again reminded us all why he's one of the very best middleweights on the planet. He pitched a shutout against the always game Kelvin Gastelum, winning the fight 50-45 on my scorecard. Short of some kind of spectacular finish, it was the kind of performance he needed to secure that title shot, and that he did.

So, the question now is not whether he gets the title shot next -- for I'd be shocked if it didn't happen -- but where does it happen?

Does the UFC dare travel to Australia or New Zealand, places that some might say are dealing with this pandemic better than we are in North America? Lord knows they can sell a ton of tickets, just like they did back in 2019 (50,000+, in fact). Or, do they do it in Vegas? That would be kind of a shame considering how big this fight would be in Oceania.

The UFC can worry about all that in a bit. For now, let's celebrate Whittaker: a man who has been open about his mental health struggles, a family man who briefly paused his career after the Adesanya loss to regain his love of the sport.

He has always done it right. Always represented the sport, the UFC, his team and his country with class and dignity. So, I am happy one of the good guys is getting another crack at the belt he lost less than two years ago.

As for Vettori, I'm sure he's bummed right now, but he shouldn't be. He's one away. Match him up against Brunson next, and if he wins that, he should get the winner of Adesanya-Whittaker 2. No questions asked.

Just like there should be no question who Adesanya's next title challenger is: Bobby Knuckles.

Who should be next for Robert Whittaker: Israel Adesanya

There is no debate. Whittaker is the obvious No. 1 middleweight contender. And honestly, I'm not sure he shouldn't still be somewhere on ESPN's pound-for-pound list. He's won 12 of his last 13. Two of those wins were title fights. His last three victories have been five-round main events, against some of the very best contenders of the division in Darren Till, Jared Cannonier and Kelvin Gastelum.

Neither the UFC nor Adesanya has seemed all that interested in this rematch, but Whittaker has officially forced their hands at this point. I'm very much looking forward to it.

I can't think of any reason why Whittaker wouldn't get the title fight. Sure, let's make Costa the wild card scenario, but we could list anyone as Whittaker's wild card. The rematch is next, and everyone seems to finally know it now.

Who should be next for Kelvin Gastelum: Loser of Uriah Hall vs. Chris Weidman on April 24

It sounds cliché to say Gastelum doesn't lose anything in this loss -- so, I won't say it. Even though I want to.

Despite losing every round, Gastelum kept coming forward, still throwing with bad intentions. He took this fight on shorter notice and it's not the end of the world for him. But, he does lose something in this loss. He doesn't lose any respect in the sport, but his record is now 1-4 in his last five. He's lost a lot of ground in this division, and it will take time for him to gain it back.

He has history with Hall and Weidman, losing to both of them. He and Hall have become close since they fought on The Ultimate Fighter in 2013, but a rematch would make sense in the rankings and there's a story behind it. Weidman, with a loss, would fall into his own poor stretch of results, but from a rankings perspective, would also make sense.

Gastelum has always expressed interest in a return to welterweight, where he hasn't fought since 2016. He missed weight multiple times as a 170-pounder, and was basically forced to move up by the UFC.

If he were to team up with the UFC's PI and dedicate himself more to weight management, I believe the UFC would allow him to try again. I'm not in favor of guys cutting enormous amounts of weight, but I could see welterweight being a real option for Gastelum, once he addresses his options.

Raimondi: Cortez could be contender if she gets weight in order

In the first round Saturday, Tracy Cortez looked like a world beater. She tripped Justine Kish to the canvas and threw down some wicked ground and pound from guard. She was fast, aggressive and powerful. Kish scrambled out, and Cortez took her back. The first was a borderline 10-8 for Cortez.

But after that, it was clear Cortez's weight cut caught up with her. She missed weight by a half-pound Friday and has had issues with weight in the past. Cardio became an issue for Cortez after the first round, and Kish was able to come back a bit. Cortez still won by split decision, but it should not have been as close.

There are very high hopes for Cortez from her camp at Fight Ready in Arizona. Her coaches, Santino DeFranco and Eddie Cha, have raved recently about Cortez being someone to watch as she climbs the flyweight ladder. This camp, she worked a lot with former UFC flyweight and bantamweight champion Henry Cejudo, a former Olympic gold medalist in wrestling. Cortez has all the skills to be very dangerous at 125 pounds -- a wide-open division -- but she needs to get her weight cut sorted before she can be considered a bona fide contender. There's good news, though. Cortez is only 27 years old. She has time to figure it all out and likely will.