Jon Cooper took over as coach of the Tampa Bay Lightning in March 2013. In most industries, he'd still be considered relatively new on the job. In the NHL, he's the second-longest tenured coach, trailing only Chicago's Joel Quenneville. Cooper's Lightning will be a cause célèbre at this weekend's All-Star Game in Tampa. In a normal season, Tampa Bay would be the toast of the NHL for storming to the best record at the break. (But this isn't just any season; as Cooper himself notes: "Vegas [Golden Knights], I would say, have topped us for sure.") Even still, the Lightning's first-half dominance is something to admire.

In an interview with ESPN before Monday's game against the Chicago Blackhawks, Cooper -- who never played top-level hockey after high school but took up lacrosse in college, spent time on Wall Street, got a law degree and became a high school coach in 1999 almost by chance -- dishes on what he learned from last season's letdown, why he used to fake phone calls, why he quit his job as a public defender to become a hockey coach and what people don't know about star center Steven Stamkos.

On how he's evolved as a coach since he entered the league:

I'm a lot more knowledgeable, I'll tell you that. I have a lot less hair. When I first came into this league, I didn't know the NHL. To be honest, I'd get off the bus and fake that I was talking on my cell phone, just so the players would walk ahead of me and I could follow them and see where the locker rooms were. That's a true story. 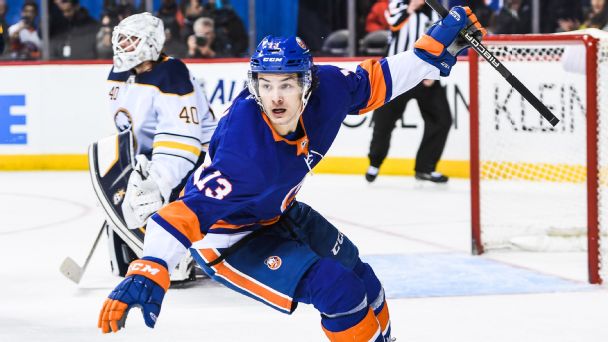 Greg Wyshynski and Emily Kaplan discuss the death of Jim Johannson and some surprise teams that could make a Stanley Cup run. Plus, some expansion talk now that Emily has returned from Seattle, as well as interviews with Lightning head coach Jon Cooper and Islanders rookie Mathew Barzal. And finally, some Oscar snubs and another edition of the ESPN On Ice rant line. Listen »

I never look at myself as a veteran in this league, but now I'm in my fifth year, so you begin to see things again. You're not seeing it for the first time. The experience of being around, knowing all of the players in the league, knowing the coaches, knowing their styles, how they do things. You can't really know that until you go through it. I'm just extremely fortunate to have been able to stick around this long.

On being the league's second-longest tenured coach behind Joel Quenneville:

That is crazy to think about. I mean, he's the coach who gave us heartbreak a couple years ago, [when the Blackhawks beat the Lightning in the Stanley Cup Final] in 2015. It's a tough league. Pro sports is a what-have-you-done-for-me-lately business, and I feel extremely fortunate to be surrounded by an owner, in Jeff Vinik, and a general manager, Steve Yzerman, who have been in this league for a long time, and know something about stability and being in one place for a long time. For [Yzerman] to put his trust in me and to let coach this team for this long, I feel a little bit blessed. You don't want to let him down. It gives you that extra fire to do well.

On quitting his job as a public defender to commit to hockey full-time:

It's well-documented that I coached my first team, a high school team, because I needed a job from a judge in Lansing, [Michigan]. So it was kind of a give and take. But I'll never forget, after that year, when I didn't know if I was going to coach again, that feeling of how much fun I had with those kids. And in the end, none of those kids -- they're not going to be happy if they hear this -- were going to make the NHL. But it was such a pleasurable experience to be around them.

I wanted to be a part of this. It was filling the void in my life, [rather] than getting up in the morning and working 10 hours a day. I remember, when I was working, say, 60 hours a week as a lawyer and coaching 20 hours a week that I thought, "Oh my gosh, I have to figure out a way to get paid doing this." And that's when I realized that if I had an opportunity to coach full time that I was going to do it.

On reaching his players:

I think if you asked other people, "Why does Coop have some success?" they would probably say it's because I can relate to them. I don't know what it is. Maybe it's because I'm just a kid myself. Not by age, but by my heart. You have to keep reinventing yourself and you can't keep going to the same well all the time, because that act will get old with the guys. I coach the same guys. I've had Tyler Johnson and the [Ondrej] Palat and those guys for seven years. You're always re-evaluating what you're doing and looking inside yourself saying, "You know what? We did get to the Stanley Cup Final, but we didn't win. Yeah, we got further than 28 other teams, but how can we take that next step?" My one thing is: The second you start resting on your laurels and you think you conquered it? I'll be standing where you are right now. It's about challenging yourself.

On turning over a new leaf after last season:

Obviously the way last year went [when the Lightning failed to qualify for the 2017 Stanley Cup playoffs, ending their three-year postseason streak], I really had to take a look at myself. It wasn't on the GM, it wasn't on the players. I felt it was on me. How I was going to change myself and adapt to the players we have? I think it's made me a better coach.

On turning over a new leaf heading into the second half of this season:

It's 82 games. You won't have a chance to win the Stanley Cup unless you make the playoffs. That has to be the goal of the team. Regardless of where you finish, first or eighth, you've got to get into the dance to have a chance. Are we excited about where we are in the standings? We are. Are we happy that we've stumbled in five of our last seven [entering the game against Chicago]? No. We've given ourselves a little bit of a buffer, but we've accomplished nothing yet. That's the attitude in that room.

On trends in the NHL this season:

Whoever wins the Stanley Cup, other teams try to emulate the way they play. When those faceoff rules [changed], those slashing rules went [into effect], it made it tougher to defend. Any time you make it tougher to defend, you're going to make it easier on offensive players. Then the speed picks up a little bit, the quickness -- and because of those little things, the game has sped up. The other thing too, is that it has kind of knocked out the 6-foot-2 guy and replaced him with a 5-foot-10 guy. Because now it's easier for them to get around, and their speed and skill is now being introduced to the league. It's made it a faster league.

Stammers is our captain and he's been around a while. He's a kid at heart. He's not afraid of the practical joke. I think he got that from Martin St. Louis. Marty used to, you'd be sitting right here and he'd just pop out of the stick bag. He was around a fun group of guys, but what makes him good as a captain is that he can be lighthearted with the guys.

On why Tampa has been a Sun Belt success:.

It starts with the owner, there's no question about it. His philanthropy, what he's done for the community, it's why our franchise is so popular in the city. Yes, it does help that we win, and yes, our general manager has done a great job. But in the end, our owner has set the stage for success. And that's by giving back to the community. He's a selfless man and it's been a trickle-down effect for all of us. And the city has embraced us.