FORT MYERS, Fla. -- Chris Sale had reached the iron-pumping portion of his offseason workout. So, the Boston Red Sox ace figured he would get started by reaching for one of the heaviest weights at his feet.

Well, at least that's the way Jason Groome -- undeniably a big boy -- remembers it going down.

At first blush, Sale and Groome were an odd couple this winter. Sale, 28 and built like a pipe cleaner, is a six-time All-Star with five consecutive top-five finishes in the American League Cy Young voting. Groome, 19 and cut from the mold of every classic power pitcher, has thrown all of 62 innings in the minors since the Red Sox drafted him in the first round in 2016 and signed him to a $3.65 million bonus.

But there they were, a pair of left-handed pitchers working out side by side three times a week at the Southwest Florida training facility co-founded by Lademann and pushing each other in ways that belied the vastly different points at which they find themselves in their careers, and lives.

'We're playing for the whole thing' 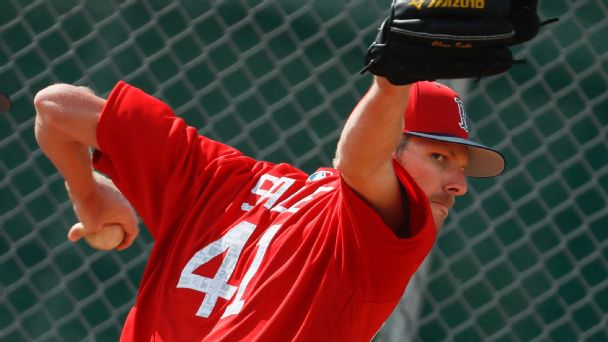 Chris Sale and the Sox have a plan to keep the ace fresh for the Fall Classic. Lauber »

"I remember my first couple weeks in the big leagues, and the guys that I had -- [Mark] Buehrle, [Jake] Peavy, [John] Danks, Edwin Jackson, and in the bullpen, [Matt] Thornton, Jesse Crain, [Scott] Linebrink -- I can sit here and rattle off names all day," Sale says, recalling his veteran teammates with the Chicago White Sox. "How they helped me and kind of formed me, for me to say, 'Hey, [if] you want to succeed, this is the kind of work you're going to have to do,' I'm just passing it along."

Pay it forward. That was Sale's intention in October when he heard from Red Sox mental skills coach Laz Gutierrez that Groome had moved his family from New Jersey to Fort Myers to be closer to the team's training complex. Sale got Groome's number and texted an invitation to join him for a workout.

"I thought one of my buddies was playing a prank on me," Groome says.

But it wasn't a joke. And later that day, Groome went to meet with Sale and Lademann.

What's it like for a teenage pitcher to train with Sale? Imagine being a music student and jamming with Eddie Vedder, or an aspiring photographer and tagging along on a shoot with Annie Leibovitz. As Groome made the half-hour drive south on Interstate 75 from Fort Myers to Naples, he could barely express his enthusiasm.

"I was really nervous," he says. "I kept talking to my girlfriend and I'm like, 'I'm going to work out with, or at least go meet, a dude that I've been looking up to these past couple years.'"

Sale and Groome were fast friends, the latter admiring the former's work ethic, the former impressed by the latter's desire to learn. They drew up a schedule. The weeks would begin with a Monday night workout. On Wednesdays, they would join Red Sox pitcher Rick Porcello for Pilates. Sale and Groome would then return to the weight room on Thursdays and Fridays.

Groome was most comfortable in the gym. At 6-foot-6, he stands eye-to-eye with Sale. But Groome is also 220 pounds, about 50 pounds heavier than his new pitching mentor, with the natural strength to match.

But if Groome wasn't ashamed to show off his muscle, he was out of his element when it came to Pilates. Truth be told, he wondered at first if Sale and Porcello were serious, "but now I see it's very important for flexibility, especially for pitchers. The first couple classes wasn't too bad, but after that, the next 10-15 sessions we had, they were really tough."

"He's pretty quiet, but I could tell his wheels were turning on some days -- 'All right, what's going on here?'" Sale says. "When you think of athletes in sports, you think of lifting weights and running and throwing and medicine balls. But a lot of it is body control and knowing how to fire different muscles at different times. That's what Pilates does."

The pitchers bonded over Groome's 5-year-old twin brothers and Sale's 7-year-old son. Sale indulged Groome's interest in fast cars and basketball and tried with little success to get him into golf.

It all began in Boston Based on pure stuff, Groome doesn’t need much help, not even from Sale. Ranked as the Red Sox's top prospect and No. 30 overall in baseball by ESPN's Keith Law, Groome cranks up his fastball in the mid-90s and bends a nasty curveball that gets swings and misses. But he also missed two months last season after straining a lat in his first start and was shut down in August with a forearm strain. In between, Groome posted a 5.69 ERA, including a 6.90 mark in 11 starts at low-A Greenville, and walked nearly five batters per nine innings.

"Coming from high school, I was used to going complete games with double-digit strikeouts, giving up one hit, no runs," Groome says. "But here, everyone gets paid to play this game the same as I do. I have a little target on my back just because of all that prospect stuff. I know people want to do good against me."

If anything, Groome says that being around Sale taught him the importance of focusing from pitch to pitch rather than thinking too far ahead. Mostly, though, Groome learned the value of hard work and preparation.

"I could see when he was working out how it translates to the mound a little bit, because he's very serious, he's competitive, and he makes sure he's doing everything right," Groome says. "It started to click for me like, 'wow, maybe I'm not doing as much as I really can.' Last offseason I was struggling with my weight a little bit. I thought I put in the work, but comparing it to this offseason, I didn't do nearly as much work. And this season, it clicked, and I just wanted to get as good as I could get off the field."

A consensus top-10 pick before the draft, Groome dropped because of signability issues and concerns about his makeup. In addition to scouts' whispers about off-field transgressions, Groome was recruited to pitch for college powerhouse Vanderbilt before curiously decommitting and enrolling at Chipola Junior College in Florida.

The Red Sox scooped up Groome with the 12th overall pick and expressed as much confidence in the strength of his character as they have in the quality of his pitches. And Sale came to know Groome as serious about getting better.

"It's not easy for a 19-year-old to drive half an hour and be somewhere on time at 9 o'clock in the morning," Sale says. "That shows he's dedicated. There was no complaining. He showed up every day ready to go, and we got after it."

Sale now spends his days in the Red Sox's major league clubhouse, preparing for an Opening Day start March 29 at Tampa Bay. Groome is on the minor-league side of camp, where locker room accommodations aren't as plush, and glory is harder to come by. He has not yet received his season-opening assignment, but a return to Greenville seems like a safe bet.

In time, Groome could emerge as the pitcher who snaps a decade-long drought by becoming the first homegrown starter to become a long-lasting member of the Boston rotation since Clay Buchholz. By then, maybe Sale will still be here, assuming the team signs him to a contract that extends beyond his 2019 option.

"That would be great," Groome says. "Especially if I get there, it'll be awesome to say, 'Hey, remember in 2017-2018, the first time we worked out together? Now we're pitching in the World Series.'"

And wouldn't that make for good conversation between Pilates classes?