After New Jersey's Supreme Court victory in May 2018, any state can legalize sports betting.

At the same time various state lawmakers are considering sports betting legislation. Congress is too.

The dual track of proposals -- state and federal -- have increased in frequency since the start of 2017.

To measure the change in the landscape, we ranked all 50 states and the District of Columbia in terms of how likely it is for each jurisdiction to offer full-scale legal sports betting. A brief synopsis for the active states is included, with updates to follow. 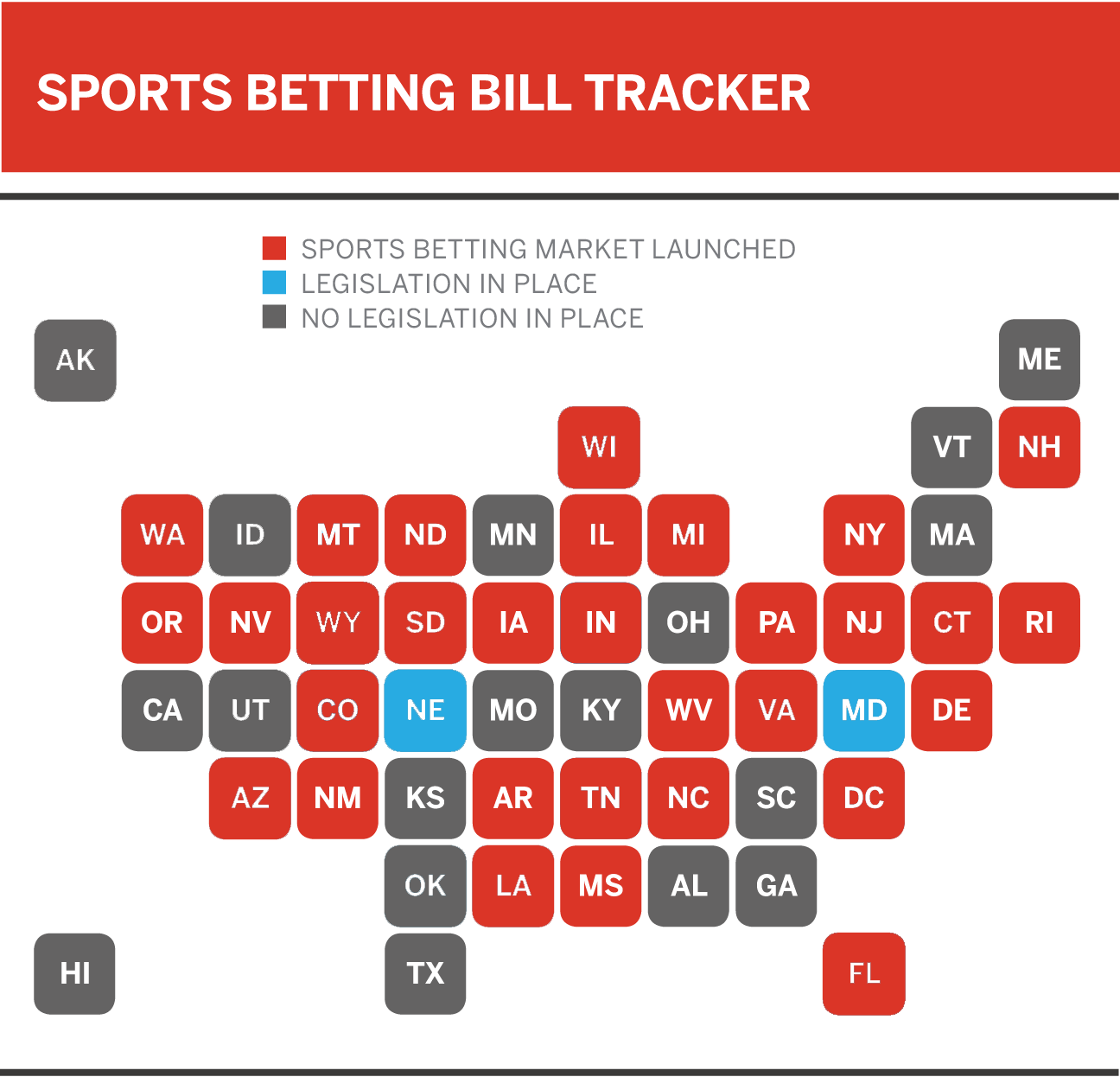 No longer the only state to permit a wide variety of legal sports betting, Nevada is a mature market that has existed for decades. Given its long history in successfully offering regulated sports wagering, many states might look to Nevada for best practices.

On June 5, 2018, Delaware moved to offer single-game betting on a number of different sports at three casinos in the state. Expanded sports wagering options could take place at additional locations or online. Delaware's authorization of what Gov. John Carney described as "a full-scale sports gaming operation" happened less than a month after the Supreme Court ruled that the federal law restricting single-game betting to Nevada was unconstitutional.

On June 11, 2018, Gov. Phil Murphy signed the sports betting bill that had passed the previous week. A William Hill sportsbook at Monmouth Park took the first bets on Thursday, June 14 at 10:30 a.m. ET. Gov. Murphy was the first customer in line. The Borgata in Atlantic City booked sports bets 30 minutes later. Other sportsbooks in New Jersey opened soon thereafter. For example, FanDuel's first sportsbook at the Meadowlands opened its doors on July 14.

Two casinos owned by MGM Resorts booked their first sports bets in Mississippi on Aug. 1, 2018. Mississippi enacted a new law in 2017 that allowed for sports betting pending a favorable decision by the Supreme Court. In June 2018, the Mississippi Gaming Commission adopted implementing regulations that require all betting to take place in person, with mobile wagering to be considered later.

On Aug. 30, 2018, West Virginia became the fifth state to offer legal and regulated sports betting when the Hollywood Casino -- a sportsbook owned by Penn National -- opened its doors. The move came six months after the West Virginia legislature passed a new bill with the West Virginia Lottery Commission serving as the chief regulator.

On Oct. 16, 2018, the Santa Ana Star Casino & Hotel booked its first sports bet in partnership with Nevada-based USBookmaking. Although New Mexico has not passed any new sports betting legislation since the Supreme Court's decision, the move by the Santa Ana Star Casino & Hotel was made via a gaming compact with the state. According to Nedra Darling, spokeswoman at the Department of the Interior's Office of Indian Affairs -- the federal agency in Washington, DC that oversees tribal gaming compacts -- the New Mexico compacts permit "any or all forms of Class III Gaming," a category in the federal regulations that specifically includes "[a]ny sports betting and pari-mutuel wagering."

The Hollywood Casino at Penn National Race Course booked the first legal sports bets in Pennsylvania in mid-November 2018. The move came just over a year after Gov. Tom Wolf signed a new sports betting bill as part of a broad legislation push that included online poker and DFS. The October 2017 bill became effective after the Supreme Court's May 2018 ruling upending the federal ban on single-game betting outside of Nevada.