Video Assistant Referee causes controversy every week in the Premier League, but how are decisions made, and are they correct?

After each weekend we take a look at the major incidents, to examine and explain the process both in terms of VAR protocol and the Laws of the Game.

JUMP TO: Liverpool vs. Newcastle | Arsenal vs. Aston Villa | Fulham vs. Brighton

VAR decision: Penalty overturned, Cresswell handball covered by an exception in the laws.

VAR review: On the face of it this had all the hallmarks of the penalty given by the VAR for handball by Aston Villa's Lucas Digne against Crystal Palace earlier in the season. Cresswell had his arm above shoulder height and the ball hit it from close proximity -- except there is one key difference.

When Harry Kane headed the ball towards goal, it came off Cresswell's face and onto his outstretched arm. In the case of Digne, the ball directly hit his arm (though it was a very harsh VAR decision.)

The handball law states that a player should not be penalised for making their body unnaturally bigger if "contact is a consequence of the player deliberately playing the ball with another part of the body (against herself/himself)."

In The IFAB's guidance issued in the summer of 2021, a Marcos Rojo handball when playing for Argentina against Nigeria at the 2018 World Cup (watch here) was used as an example of this exception. Rojo headed the ball onto his outstretched arm. In that match, referee Cuneyt Cakir was sent to the monitor by the VAR to give a penalty but he rejected the overturn and stuck with his original decision.

The IFAB extended the scope for what constitutes a "deliberate play" at the start of this season, as part of updated guidelines within the offside law. If the ball is sent on a different trajectory when coming off a player's body, that should be considered a "deliberate play." Kane's header was going towards goal, and the deflection off Cresswell's face took the ball away from it.

It wouldn't have been easy for referee Bankes to see the deflection off Cresswell's face. And if the Bankes doesn't mention this in his description to the VAR, Stuart Attwell, then it's grounds for a review as a clear and obvious error. It means the VAR was correct to advise the penalty should be cancelled.

What happened: West Ham equalised through Tomas Soucek in the 55th minute, with the move starting from a Vladimir Coufal throw-in.

VAR review: VAR protocol doesn't allow for a review of any kind of restart (other than a penalty kick.) This also includes the ball moving on a free kick, not being in the quadrant on a corner or in the correct position. It's down to referee Bankes and his assistant, who was close to Coufal.

The IFAB VAR manual states: "In general, incorrect restarts ... are not reviewed unless they are a serious misapplication of the Laws of the Game. Because they are not match-changing decisions and should be detected by the match officials."

What happened: Alexander Isak burst through to put Newcastle United 2-0 up at Liverpool in the 54th minute but the flag went up for offside (watch here.)

VAR review: As with all the other such VAR decisions this season, the process remains simple. If the lines for the attacker and defender touch, onside will be given.

There is a clear gap between the lines, and it's not as close as other recent decisions such as Chelsea's Kai Havertz against Leicester City and Arsenal's Gabriel Jesus against AFC Bournemouth.

If this image were to show Isak was onside, the striker's knee would be in advance of the vertical line. The VAR cannot go against the technology, which is mapped to each pitch individually. 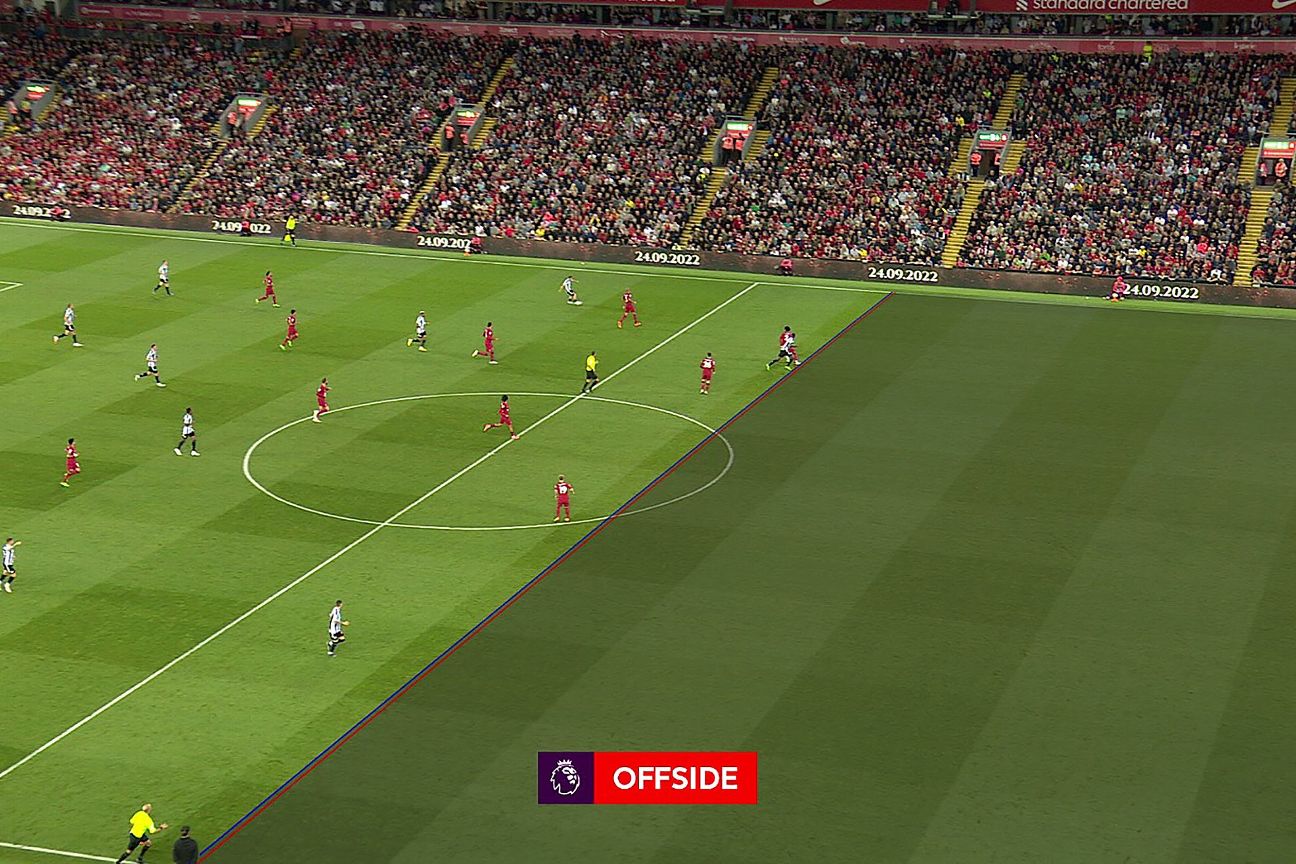 It's the same for Demarai Gray's disallowed goal for Everton at Leeds on Tuesday evening. The gap between the lines is even clearer on this decision; the attacker has to be offside (watch here.) As with Isak, the offside flag was raised by the assistant and the decision upheld by the VAR. 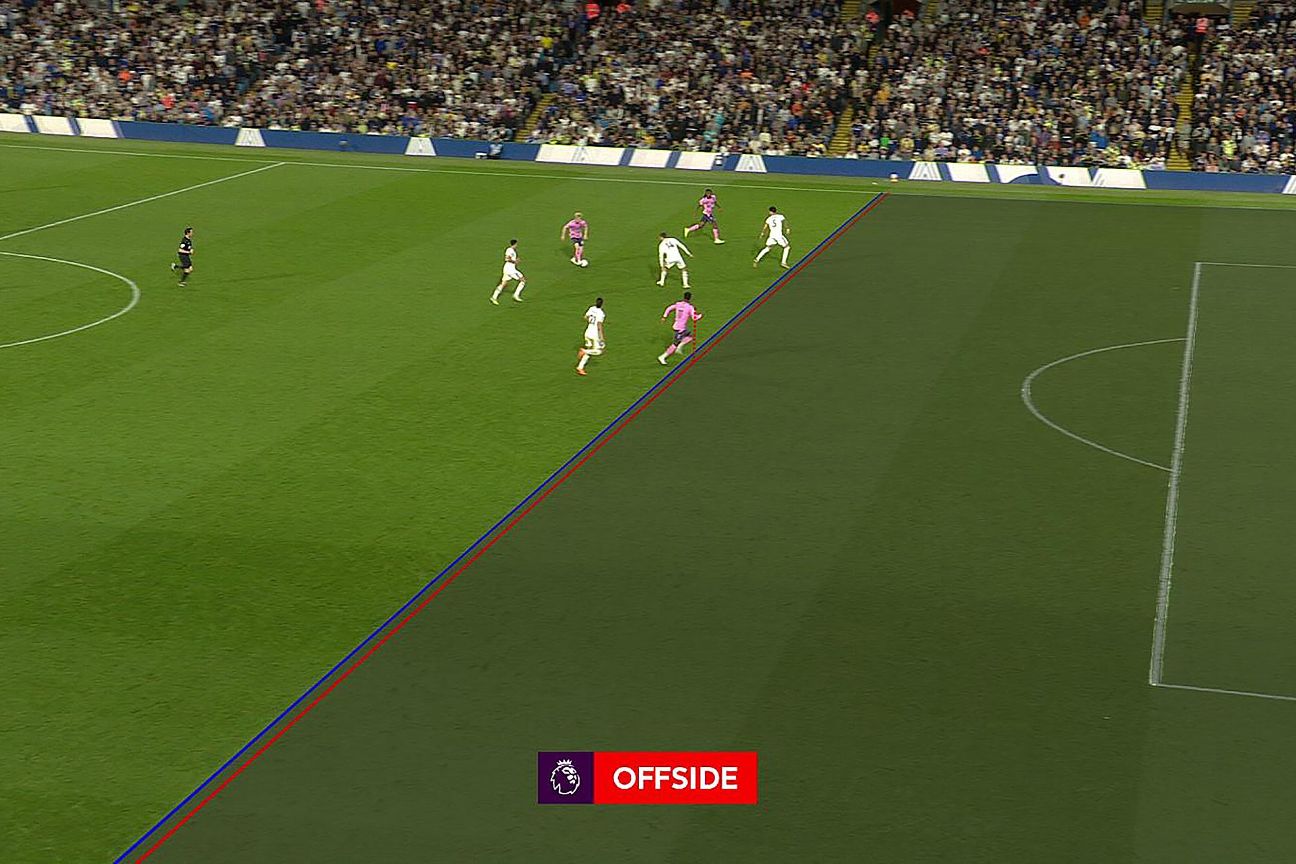 No two offside decisions are ever the same -- they are unique incidents. So it's futile to argue if one situation is given as onside, then Isak and/or Gray should be too. 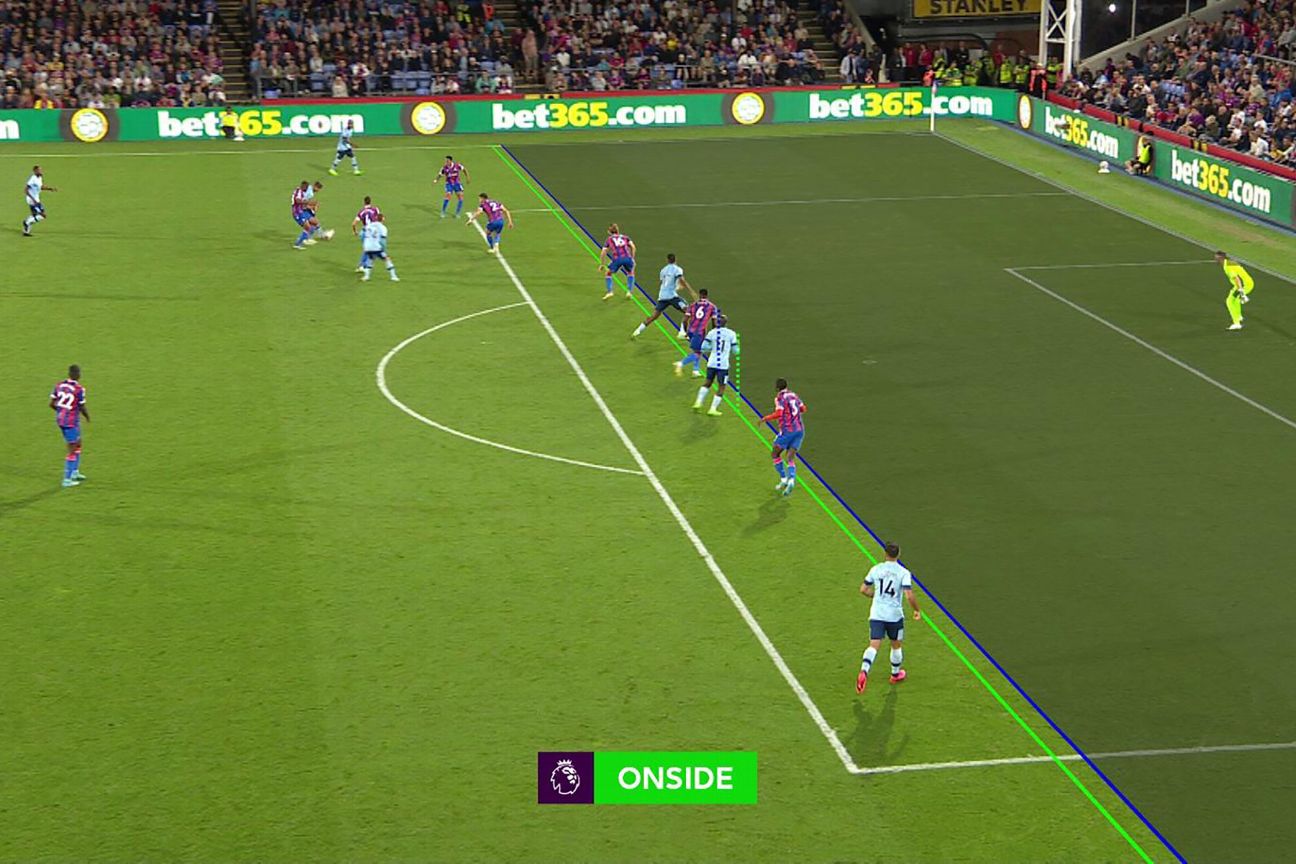 What happened: The score was goalless in the 20th minute when Bukayo Saka went to ground claiming for a penalty after Tyrone Mings was holding him inside the area. Referee Robert Jones waved away appeals for a penalty.

VAR review: We had another holding incident at the weekend, when Wolverhampton Wanderers' Matheus Nunes held onto the shirt and arm of Newcastle United's Sean Longstaff inside the area. Then the VAR didn't advise a penalty when he probably should have, due to the shirt being pulled away from the body.

This is a similar kind of incident, as it's covered by the law around holding onto a opponent.

Mings has one arm around Saka and is certainly holding onto him, but is it an offence for which Arsenal should have been awarded a penalty? The VAR, Darren England, will be asking what the referee has seen, if he has a clear view of the holding and then assess how much that holding may have impacted Saka.

Key considerations include:
- if the opponent is paying no attention to challenging for the ball.
- if the pulling or holding clearly prevents movement and the ability to challenge for the ball.

The VAR will also consider how Saka has gone to ground; has the Arsenal player used that contact to try to win the foul? Would Mings be able to lift Saka up and throw him to the ground with one arm? Or has Saka created that impression?

It's another of those decisions where if given on the pitch it probably wouldn't get overturned, but the VAR is not going to intervene in the subjectivity of the referee when there is a clear question over Saka's role in the incident.

Possible foul before a goal: Kamara on Ramsdale

What happened: Aston Villa equalised in the 74th minute when Douglas Luiz scored direct for a corner, but there was a question of Boubacar Kamara blocking off Arsenal goalkeeper Aaron Ramsdale.

VAR review: If you take this incident and compare it to Leicester City's disallowed goal at Chelsea on Saturday, you'd probably say the decisions should have been the other way around: the Villa goal should be ruled out and Daniel Amartey's at Stamford Bridge allowed.

It's a classic example of the referee's decision on the pitch carrying the weight in VAR decisions -- whichever way the referee goes, the VAR wouldn't intervene.

There is a case to answer, because Kamara blocks Ramsdale. However, it's all about how he does so. An attacking player doesn't have to get out of the way for a goalkeeper, he is allowed to stand his ground. It becomes an offence if the attacking player moves into the goalkeeper's path to block his path.

The VAR decided that Jones hadn't made a clear and obvious error, but many Arsenal fans will believe that Ramsdale was prevented from being able to play the ball. But it was actually more Ramsdale's responsibility to get around Kamara in this case.

What happened: In the 57th minute with Fulham 2-0 up, Brighton's Pervis Estupinan went down in the box following a challenge from Bobby De Cordova-Reid. Referee Thomas Bramall, who was taking charge of his first Premier League game, allowed play to continue.

VAR review: An easy decision for the VAR, Paul Tierney, as Bramall hadn't seen that De Cordova-Reid had kicked through Estupinan in his attempt to win the ball. A clear penalty.