FOXBOROUGH, Mass. -- For 21 years, Doug Flutie's career has
been defined by one play. Now the "Hail Flutie" has its historic
bookend. 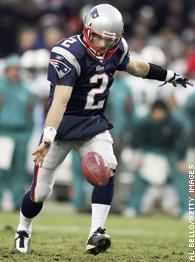 "I think Doug deserves it," said usually dour Patriots coach
Bill Belichick, who broke into a wide smile when his sprightly
quarterback split the uprights off one bounce. "He is a guy that
adds a lot to this game of football, has added a lot through his
great career -- running, passing and now kicking.

"He's got a skill and we got a chance to let him use it, and I
am happy for him. First time since '41," said Belichick, a
football historian who last month brought out a leather helmet in
his media session. "It might be 60 years again, too."

According to the Pro Football Hall of Fame's Web site, the
league's last drop kick for points was on Dec. 21, 1941 -- two weeks
after the bombing of Pearl Harbor -- when Ray "Scooter" McLean
converted for the Chicago Bears to beat the New York Giants 37-9 in
the NFL championship game.

"Flutie might have been there the last time it happened,"
placekicker Adam Vinatieri joked.

The ball was more round until 1934, making the bounce more
predictable. And the rules were changed to require the kicker to be
behind the line of scrimmage, relegating the drop kick to a riskier
version of a place kick or extra point.

The drop kick remains in the NFL's official rule book, even though it hadn't been successfully converted in decades. Rule 3, Section 8 defines the drop kick as "a kick by a kicker who drops the ball and kicks it as, or immediately after, it touches the ground."

According to the Hall of Fame's site, ex-Bears quarterback Jim McMahon begged his coach for a chance to attempt a drop kick in a game. But his coach, Mike Ditka, denied the request.


But when ESPN broadcaster Chris Berman mentioned to Belichick
that he'd seen Flutie drop kick, the coach called his quarterback
into his office and asked if he could do it.

A native of nearby Natick, Flutie won the Heisman Trophy at
Boston College after connecting with Gerard Phelan on a 48-yard
touchdown pass to beat Miami as time expired. That is his signature
play -- and one of the most memorable in college football history.

With the Patriots already happy with their playoff seeding, Tom Brady sat out most of the game so Matt Cassel, who's usually No. 3
behind Flutie, could get some snaps. He hit Tim Dwight for a 9-yard
touchdown with 6:10 left, and Flutie came onto the field with the
kicking unit.

"It sort of screwed me up," said Dolphins coach Nick Saban,
who needed a timeout to get things straight. "I couldn't figure
out what was going on. They had a quarterback in, four tight ends
and a receiver and there was no kicker."

Flutie took his position for a regular shotgun snap, then
retreated to the 12 yard-line to await the ball; he caught the
ball, dropped it to the grass and kicked it off the short hop
straight through the uprights. After getting a hug on the field by
his teammates, Flutie ran off to embrace Belichick.

Even Saban appreciated the moment.

"I was kind of pleased to know that somebody can still drop
kick," Saban said. "Man, when I was a kid we all practiced that.
Thought it was a lost art.

"But," he added, "you know Flutie showed his age on that
one."

The 1984 Heisman winner went into the USFL and the NFL, but only
achieved stardom in the Canadian Football League, where he was a
three-time Grey Cup champion and six-time Most Outstanding Player.
He returned to the NFL in 1998 and played three years with Buffalo
and four with San Diego before returning to New England for a
second stint with the Patriots.

He hasn't said he will retire, but the impression that this is
his final season was reinforced by Belichick's postgame
valedictory.

"It's possible, but I'm not going to rule anything out,"
Flutie said. "But if that ends up being my last play, it wouldn't
be bad."

Information from The Associated Press was used in this report.