HOUSTON -- In only his third NFL start, Deshaun Watson's performance in the Houston Texans' 57-14 victory over the Tennessee Titans on Sunday was the team's best performance at quarterback in franchise history.

Watson threw four touchdowns and ran for a fifth, finishing 25-of-34 through the air for 283 yards and an interception. His five total scores tied the NFL rookie touchdown record. He is also the first rookie to pass for at least four touchdowns and rush for one touchdown in a game since Hall of Famer Fran Tarkenton did so for the Minnesota Vikings in 1961, according to ESPN Stats & Information. 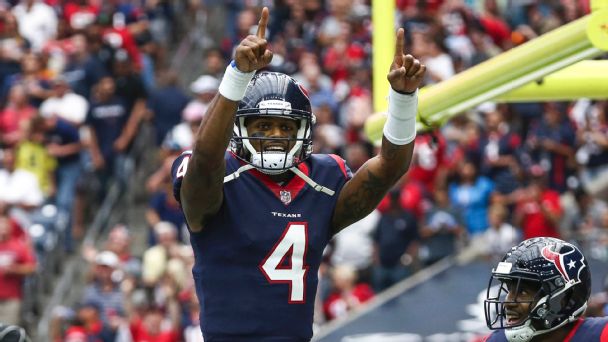 Listen to Deshaun Watson and the Texans describe his historic performance in a 57-14 win over the Tennessee. Story »

Watson had shown steady improvement since he replaced Tom Savage in the second half in the Texans’ season-opening loss to the Jacksonville Jaguars, but he took a huge leap with his record-setting performance on Sunday. Since Watson took over, the Texans’ offense has developed into a legitimate scoring threat. A season after Houston's passing game struggled, the offense has turned around with Watson at quarterback.

“Just the adjustments he can make on the field, going on the sideline, going out and correcting it. I haven’t had that in a while.”

In addition to Watson's record-setting display, the Texans broke the franchise record for points in a game. (The team's previous high was 45 points against the Titans in 2014.) For the second week in a row, the Texans accumulated more than 400 yards of total offense, finishing with 445 yards and 33 first downs.

"The way we practice, the way we go about things every day -- not just on the field, but off the field -- our mindset is we’re going to score every time we touch the ball or it’s a disappointment."

Watson spread the ball around, as six Texans made at least two catches. Hopkins recorded his first 100-yard receiving game this season, finishing with 10 catches for 107 yards and a touchdown. He reached 100 yards receiving just twice last season, in Week 2 and Week 17.

What you need to know in the NFL

Watson and the Texans' offense got a boost from the return of wide receiver Will Fuller, who was playing in his first game since he broke his collarbone during training camp. Fuller finished with four catches for 35 yards and two touchdowns and drew a pass interference in the end zone that could have been a third score. Fuller can stretch the field and helped take away coverage from Hopkins because the Titans had to be aware of Fuller’s speed. Leading up to the game, Hopkins said Fuller “can do some things” he and the other receivers in the locker room cannot do, which opens “our playbook a little bit more.”

"Will [Fuller] can open up the field," Hopkins said. "He’s a big part of this offense scoring 50-something points the way we did. You can’t just key in on me. You have to, obviously, watch Will down the field every play because he has the speed that you can’t coach."

The Texans scored 50 points for first time in team history and are the first team to do so since the Jaguars scored 51 in December 2015. Houston probably won't put up these numbers every game, but if Watson can continue to play at this level or even improve, the Texans will be a dangerous team in the AFC South.