ATLANTA -- NFL owners have unanimously approved a new national anthem policy that requires players to stand if they are on the field during the performance but gives them the option to remain in the locker room if they prefer, it was announced Wednesday.

The policy subjects teams to a fine if a player or any other team personnel do not show respect for the anthem. That includes any attempt to sit or kneel, as dozens of players have done during the past two seasons to protest racial inequality and police brutality. Those teams also will have the option to fine any team personnel, including players, for the infraction.

"We want people to be respectful of the national anthem," commissioner Roger Goodell said. "We want people to stand -- that's all personnel -- and make sure they treat this moment in a respectful fashion. That's something we think we owe. [But] we were also very sensitive to give players choices."

Goodell said the vote was "unanimous" among owners, although San Francisco 49ers owner Jed York said he abstained. York said that all owners that voted in the process supported the change. The policy will be part of the NFL's game operations manual and thus not subject to collective bargaining. The NFL Players Association said in a statement that it will review the policy and "challenge any aspect" that is inconsistent with the CBA. 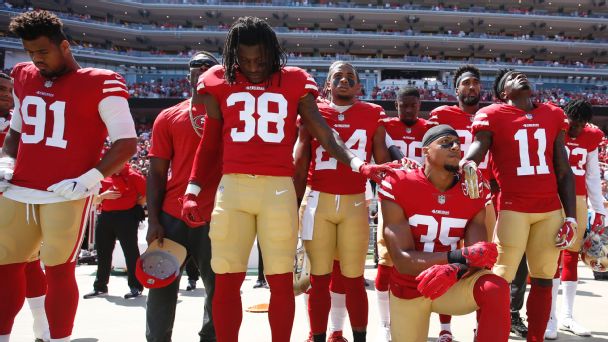 Players are required to stand if they are on the field during the national anthem. Full story »

• NFL says no formal vote on policy »
• Answering the biggest questions »
• Players, coaches and owners react »
• Why NFL is so behind on social justice »
• How anthem rules differ across sports »
• Jets won't prohibit kneeling »
• 49ers owner abstains from vote »

Some important details remained unclear in the hours after the policy's approval, including the specific fine that teams would be subject to and also how the league will define respect for the flag.

"To make a decision that strong, you would hope that the players have input on it," Cleveland Browns quarterback Tyrod Taylor said. "But obviously not. So we have to deal with it as players, for good or a bad thing.

"I think the main thing out of all of it is that each ballclub is having open communication with the players and ownership about the issues that are going on in the community and trying to change it."

"History has taught us that both patriotism and protest are like water; if the force is strong enough it cannot be suppressed. Today, the CEO's of the NFL created a rule that people who hate autocracies should reject," Smith tweeted.

"Management has chosen to quash the same freedom of speech that protects someone who wants to salute the flag in an effort to prevent someone who does not wish to do so. The sad irony of this rule is that anyone who wants to express their patriotism is subject to the whim of a person who calls himself an "Owner." I know that not all of the NFL CEO's are for this and I know that true American patriots are not cheering today."

After spending months in discussions, and another three hours over two days at the league's spring meetings, owners said this found a compromise that will end sitting or kneeling with an edict that stops short of requiring every player to stand.

The previous policy required players to be on the field for the anthem but said only that they "should" stand. When then-San Francisco 49ers quarterback Colin Kaepernick began kneeling in 2016, the league had no rule it could use to prevent it. The movement drew increasing criticism from President Donald Trump, as well as many fans, who believed it was a sign of disrespect toward the flag and country.

Owners, however, had been divided on how to extricate the league from that criticism. Some owners, including the Dallas Cowboys' Jerry Jones and the Houston Texans' Bob McNair, wanted all players to stand. Others, such as the New York Jets' Christopher Johnson, wanted to avoid any appearance of muzzling players.

Even the seemingly simple option of clearing the field prior to the anthem was rejected by some owners who thought it would be interpreted as a mass protest or at least a sign of disrespect.

Earlier this week, the league finalized an $89 million social justice platform with players to help address "some of the underlying issues" that were under protest, said Mark Murphy, the Green Bay Packers' president/CEO.

"I think we learned from each other in order to come to a unanimous consensus," Murphy said. "We also talked a lot about our players. I think when you look back at last fall, it was difficult for all of us within the league. But one of the positives that came out of it was an improved relationship with our players."

In a statement accompanying the announcement, Goodell said the league wanted to eliminate criticism that suggested the protests were unpatriotic.

"It was unfortunate that on-field protests created a false perception among many that thousands of NFL players were unpatriotic," Goodell said. "This is not and was never the case."

Kaepernick and former 49ers safety Eric Reid have both filed collusion cases against the league after failing to find jobs as free agents.

Eagles defensive end Chris Long tweeted that the policy is "fear of a diminished bottom line." Long, who is white, notably kept his hand on African-American teammate Malcolm Jenkins' back for the entire playing of the anthem before a 2017 preseason game. Long then gave Jenkins a pat on the shoulder pads and a hug when the song was over.

"It's also fear of a president turning his base against a corporation. This is not patriotism. Don't get it confused," Long tweeted. "These owners don't love America more than the players demonstrating and taking real action to improve. It also lets you, the fan, know where our league stands."

Jenkins is one of a handful of outspoken players who vowed Wednesday to carry on the cause.

"I will not let it silence me or stop me from fighting," he said. "This has never been about taking a knee, raising a fist or anyone's patriotism, but doing what we can to effect real change for real people."