The biggest storyline in this matchup centers on the student (Miami coach Mike McDaniel) facing the teacher (San Francisco coach Kyle Shanahan). Before leaving to become the Dolphins' head coach in February, McDaniel spent 14 years as one of Shanahan's most trusted assistants, with stops in Houston, Washington, Cleveland, Atlanta and San Francisco.

"We went through so much together," Shanahan said. "I think two years he coached receivers for me, but all the other times, he was a great position coach, but he was more valuable in the other way. I don't want a guy tied down to one position ... You don't just go right to a position and focus just on that position, so I think that's stuff that really benefited Mike and that's why he was the one guy I was always communicating with so consistently over the years."

When McDaniel departed the Bay Area for South Beach this offseason, he took plenty of familiar names with him, including a handful of 49ers assistant coaches and players. He also took the offensive scheme he helped Shanahan build and evolve over those many years, which is why the X's and O's for both offenses are bound to look strikingly similar.

For example, expect to see plenty of pre-snap motion, a staple of the Shanahan offense that Miami deploys at the highest rate in the league (75%) and the Niners use second most (71%).

But while Shanahan and McDaniel will be working from playbooks with many of the same concepts, the style in which they execute those couldn't be more different.

If styles really make fights, this will be a battle of San Francisco's blunt force against Miami's blazing speed. Both are successful -- the Dolphins are third in the NFL in yards per play while the Niners rank sixth -- but while the 49ers want to run you over, the Dolphins want to run right past you

Here's a look at how those two offenses have been built and what's made them successful in 2022:

UPON ARRIVING IN San Francisco in 2017, Shanahan didn't envision turning the Niners into the banner carriers for bully ball. Sure, one of San Francisco's first free-agent signings was wideout Pierre Garcon, a fierce, physical player who Shanahan believed would help set the tone for what he was trying to build.

But adding Garcon wasn't meant to be a harbinger of things to come so much as adding an complement to Shanahan's preferred style of receiver: precise route runners who could easily create separation.

It's why, in 2018, the Niners traded up in the second round to draft receiver Dante Pettis, hoping he could complement Garcon. Instead, Garcon dealt with injuries and retired and Pettis never established himself, largely because he struggled with blocking and running routes over the middle that are required in Shanahan's scheme.

So in 2019, after tight end George Kittle had earned a reputation for what he calls "running through your face," the Niners sought another wideout in the mold of Garcon. It just so happened that the Niners were coaching the South team at the Senior Bowl that January.

One of their players? A young wideout from the University of South Carolina named Deebo Samuel. The Niners were quickly smitten and used the No. 36 overall pick on Samuel, who wasted no time translating his punishing running style to the NFL.

It was eye-opening for Shanahan and the entire Niners front office, which quickly recognized that they could wear opponents down with Kittle and Samuel.

"I thought that's what we were missing just from a toughness team and that's why we like Deebo so much," Shanahan said. "Deebo came in, we knew we were getting that. And then he brought so much more to it. And once you see that you don't ever want to draft another guy who's not like that, at least has that physicality. It might not be the same, but you want to draft people who are similar and I think that's just the way we've ended up becoming."

In 2020, the Niners drafted wideouts Brandon Aiyuk (first round) and Jauan Jennings (seventh round) in no small part because of their ability to break tackles and gain yards after the catch. Early in that season, Kittle, Samuel and Aiyuk dubbed themselves the "YAC Bros," which could apply to yards after the catch, yards after contact, or both.

According to Shanahan, the Niners' physicality is also infectious. Players who might not have previously had a knack for attacking defenders sit in the meeting room every week watching film of players like Samuel and can't help but want to get in on the act.

• Inside the first duel between Hurts, Purdy
• 'Mad scientist' behind Bengals' defense
• Will Rodgers play for Packers in 2023?
• Mahomes' ankle not a concern for Chiefs
• Inside the McCaffrey trade

"When you get guys like Deebo, who plays a certain way and then everyone sees him play that way and then you show it a lot, you tie it in how it into helps the team, I think it kind of feeds off each other," Shanahan said. "And I think that's been the most important thing with our physicality, that we got the guys to do it, we emphasize it and we know it helps us win."

Those numbers explain why the Niners still rank eighth in yards per reception even though quarterback Jimmy Garoppolo is 27th in air yards per attempt.

"We have a lot of physical football players, whether it's the offensive line, wide receivers, our running backs, fullback, tight ends," Kittle said. "We're violent, we're physical. I don't think a lot of teams want to play our offense."

TYREEK HILL OFFERED a fair warning to all defensive backs tasked with containing two of the fastest receivers in the NFL -- himself and teammate Jaylen Waddle.

"Oh, especially in the heat? It's going to be crazy, man," he said during his introductory news conference after being traded from the Kansas City Chiefs in March. "Look, [defensive backs] better warm up, put ice on them, do whatever they got to do, because it's going to be a long season."

After 26 years without fielding a top-10 offense, the Dolphins were hellbent on modernizing that side of the ball.

And their revolution would be predicated on speed -- an abundance of it.

The four fastest ball-carrier speeds ever recorded by Next Gen Stats are courtesy of current Dolphins players -- Hill (23.24 mph, 22.77 mph) and running back Raheem Mostert (23.09 mph, 22.73 mph). Factoring Waddle, who posted the seventh-fastest ball-carrier speed last season at 21.8 mph, and McDaniel almost has too many options to choose from when designing and calling plays.

"It's kind of like the difficulties of the guy who has three yachts deciding which yacht to pick," McDaniel said. "No, there's no difficulties with that. It's very desirable."

According to Next Gen Stats, the Dolphins own the fastest average team speed in the NFL at 13.56 miles per hour, with 12 different ball carriers posting speeds of at least 20 mph.

Even their punter, Thomas Morstead, has been clocked at 20 mph at practice -- although he describes himself as more of a "freight train" to Hill and Waddle's Lamborghini and Ferrari. 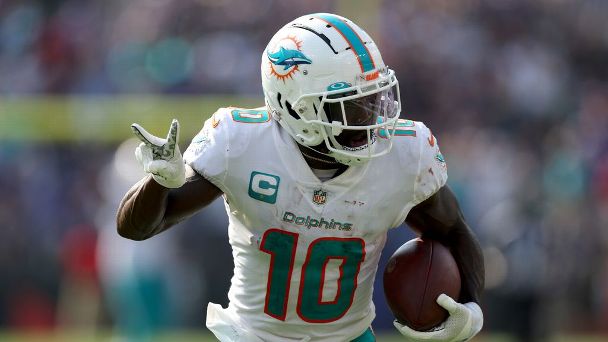 Whether McDaniel's scheme, their playmakers' speed or quarterback Tua Tagovailoa's development is most responsible for the Dolphins' success this season has been a topic of debate. Some could say they're equally responsible.

Pick a passing category and Tagovailoa probably either leads the NFL, or falls within the top five. He ranks first in QBR (82.8) and yards per attempt (9.03), second in completion percentage (69.7%), touchdown to interception ratio (6.33) and air yards per attempt (8.82), and fourth in passing yards per game (284.9).

Hill and Waddle rank first and fifth in the NFL in receiving yards, and fourth and ninth in yards after the catch, respectively. Hill also leads the league with 12 plays where his yards after catch are at least four yards more than expected; Waddle is sixth in the same category with eight such plays.

Defenses have taken note of Miami's open-field capabilities. The Dolphins have faced Cover 2, which limits the opportunities to pick up yardage after the catch, on a league-high 28.6% of their dropbacks.

"I would say what we see a lot on tape, defenses are getting a lot deeper than usual with linebacker depth, and you also see the shell of the safeties," Tagovailoa said. "They're getting really, really deep. So they do play our team a little different in that regard, just because of the speed that we have. "But the opportunity for YAC, I would say, it's hard when guys are playing so far back. It's hard."

But the benefit of having this type of speed is the ability to force busted coverages. There are numerous examples of the Dolphins doing so this season: notably Hill's touchdowns of 48 and 60 yards against the Baltimore Ravens in Week 2 or Waddle's 45-yard catch on third-and-22 against the Buffalo Bills in Week 3.

Despite defenses planning for the big play, 7.6% of the Dolphins' offensive plays have gone for 20 or more yards -- the second-highest rate in the NFL.

It harkens back to a clip of McDaniel shared on social media while he and several players attended the Miami Grand Prix in May. In it, he offered his advice to the drivers participating in that weekend's race.

"Faster," McDaniel said, a look of forced seriousness on his face. "Go faster. That's all the coaching points I've got."

Turns out, it's sound advice on the football field, too.