KANSAS CITY, Mo. -- One by one, the pieces are falling into place as the Kansas City Chiefs attempt to overhaul their defense in one offseason.

Breeland Speaks and Alex Okafor are -- at least for now -- their new edge pass-rushers, replacing the productive Justin Houston and Dee Ford. Damien Wilson is a new starting linebacker. Safety Tyrann Mathieu is the anchor at the back end of the defense, where he'll be asked to be the new Eric Berry.

There's plenty of work still to do on defense, particularly in the secondary, where the Chiefs have Mathieu, cornerback Kendall Fuller and plenty of uncertainty.

Last season the Chiefs finished 31st in yards allowed per game (405.5) and 24th in points allowed per game (26.3), and their season ended when Patrick Mahomes and the Chiefs' high-powered offense could only watch as the New England Patriots marched down the field in overtime to win the AFC Championship Game.

But general manager Brett Veach says he feels strongly this is the way for the Chiefs to go if they're to make significant improvement, even if it meant releasing two long-time stars in Houston and Berry and trading Ford, a former first-round draft pick who emerged as a top pass-rusher last season.

The Chiefs lost a lot in terms of talent and experience. But they cleared about $39 million from their salary cap, which will allow them to find players like Mathieu, Wilson, Okafor and others who are better fits for their new 4-3 base defensive scheme. They're also hoping to re-sign some of their younger stars to contract extensions.

The Chiefs picked up a second-round pick in 2020 in the trade that sent Ford to the San Francisco 49ers, giving the Chiefs three choices in the first two rounds in the next two drafts.

"The cap was certainly a big part of these decisions," Veach said. "[Houston, Berry and Ford] could help us, [but] just being real, the cap [was] an issue. You have to take that into consideration. You look at, can they help us at the cost of what it would take to do that, knowing that contracts and extensions are looming behind here? What can we do now to put ourselves in a good position not just for next year but for the next three, four, five six years? You go back to where we'll be with both draft capital and cap space, this put us in a really good position in regards to potential extensions coming up and it put us in a position to maneuver around the draft and to potentially do things outside the box from now until the start of the season."

To Veach and the Chiefs, the crucial piece in making this overhaul work was signing Mathieu. The free-agent class at safety was loaded this year, but the Chiefs had Mathieu as their highest-rated player at that position.

That's why they had to resort to a bidding war and give Mathieu a three-year, $42 million contract to get him to sign.

"You can acquire as many great players and as many talented players as you like, but until you have the catalyst to make it go, things will never work out the way you want them," Veach said. "This was the catalyst we had to have.

"I don't think there's any safety out there that can really do everything on the field -- call the show, run everything back there, play in the box, play slot, blitz off the edge, play center field. When you get a guy like that, guys like that aren't cheap. You have to make a financial commitment to those guys."

The Chiefs plan to use Mathieu's versatility by lining him up in a variety of spots.

"[Mathieu gives the Chiefs] a tremendous amount of flexibility and I know [defensive coordinator Steve Spagnuolo] will use all of it," coach Andy Reid said. "It presents problems [for the opposing offense]. You've got to know where he's at. You have to know where he's going to be and you kind of work the other side, go opposite.

"He's not the biggest guy in the world, but he plays that way. He plays such a physical game and he's so good toward the line of scrimmage. But on the [other] hand, he's great at the back end making plays on the ball." 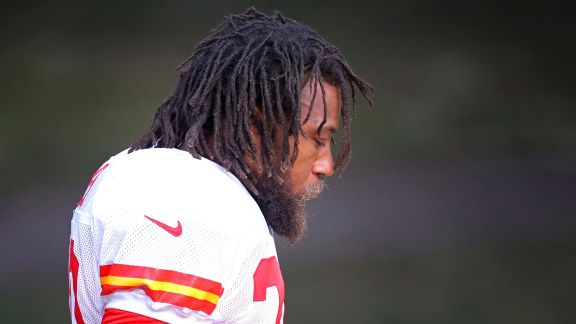 Eric Berry, loved and respected by the Chiefs, provided moments of brilliance and leadership, but spent too many days on the sideline. Story

The Chiefs once had that kind of player in Berry, but he missed most of the last two seasons because of injuries. Mathieu said he welcomed the challenge of doing for the Chiefs the things Berry once did.

"That's part of the reason I'm here," he said. "I think we all know what our offense can do. It will be my job to come in here and try to get some direction, try to give guys some motivation and some inspiration and then be an everyday factor. I want to be the same guy in the weight room that I am on the football field."

If the Chiefs had a game today, they could line up a front seven that includes Speaks and Okafor at end, Jones and Derrick Nnadi at tackle and Wilson, Anthony Hitchens and Reggie Ragland at linebacker.

The Chiefs aren't as prepared to play a game in the secondary. But the Chiefs have plenty of time to see that they are by the time the regular season rolls around.

"It's a long way until the opening kickoff in September," Veach said. "[Player acquisition] never ends. There's a window here coming up before the draft where things happen. Then there's the draft. There are moves made during the draft and then after the draft.

"We're not done. This was one part. One part was to get the flexibility and the ammunition to do the things we want to do. ... Moves cannot be made unless you have [cap] space and draft capital. That's kind of the position we're in now."