Let's grade the trade that sent former Super Bowl MVP Joe Flacco from the Ravens to the Broncos, which reportedly cost Denver a midround pick in the 2019 NFL draft:

The news that the Broncos are dealing for Flacco is a reminder that the things we've known about the league for years are still true. 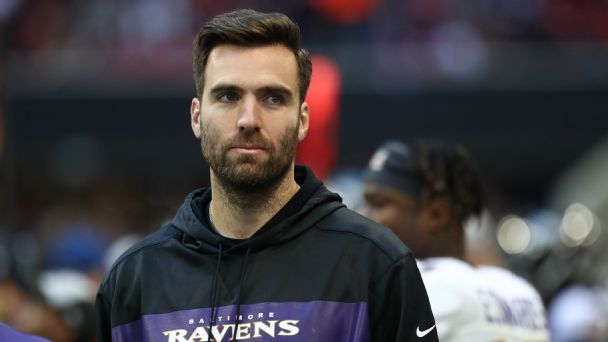 To start, nobody knows anything about evaluating quarterbacks. If anybody should be an expert on which quarterbacks actually have the "it" factor and are about to turn into superstars, it should be John Elway, who is now the Broncos' general manager.

The Hall of Famer won two Super Bowls as part of a glittering 16-year career under center for the Broncos. He took over a floundering Denver team after the disastrous Josh McDaniels era and immediately led it back to the postseason. Elway nailed his two biggest decisions in replacing Tim Tebow with Peyton Manning (which was more controversial at the time than it seems now) and by swapping out John Fox after a 12-4 season for Gary Kubiak. The Broncos won Super Bowl 50 the following season.

Everything else Elway has done with the quarterback position has led to Wednesday's move. He used a second-round pick on Brock Osweiler in 2012, drafting the 6-foot-7 Arizona State product 18 picks before the Seahawks chose Russell Wilson. Elway tried to retain Osweiler with a significant offer north of $12 million per season in free agency, only to be outbid by the Texans. When that failed, Elway traded up in the first round of the 2016 draft to grab 6-foot-7 Memphis quarterback Paxton Lynch, who couldn't beat out 6-foot-3 seventh-round pick Trevor Siemian in two chances for the starting job before being released.

Elway broke from type briefly after Lynch bombed to a nearly unprecedented degree by signing 6-foot-1 Case Keenum in free agency last year. Keenum didn't live up to the heights he reached with the Vikings in 2017, unsurprisingly, but he also delivered the best season the Broncos have gotten from a quarterback since Manning in 2014. Keenum posted a 46.9 QBR on a team whose two best offensive linemen (Ronald Leary and Matt Paradis) combined for 15 starts. The Broncos traded Demaryius Thomas in midseason and then lost Emmanuel Sanders to a torn Achilles for the final month of the season. Keenum wasn't great, but he was about what Elway & Co. should have expected.

All of that brings us to the next lessons. In the NFL, shorter quarterbacks like Keenum have to constantly prove they can play. Tall quarterbacks get chance after chance to prove they can't play. And more important, when NFL coaches and executives are on the ropes, they're going to turn to what they know or what has worked in the past.

Come on down, Joe Flacco! The Broncos traded a midround pick to the Ravens for their deposed 6-foot-6 starter, who lost his job to Lamar Jackson and immediately saw the Ravens make a run to the postseason. ESPN's Adam Schefter noted that Flacco got enthusiastic recommendations from new Broncos coach Vic Fangio and former team executive Kubiak, each of whom was in Baltimore with Flacco earlier in his career.

Flacco has posted exactly one above-average season by passer rating or net yards per attempt since his incredible run to the Super Bowl in 2012. His Total QBR over that six-year stretch is 53.8; among the 20 passers with 2,000 or more pass attempts over that time frame, the only quarterbacks Flacco beats out are Eli Manning, Ryan Tannehill, Derek Carr and Blake Bortles. (Keenum's QBR over that time on 1,844 attempts is 51.5.)

Flacco has 5,670 career pass attempts with an ANY/A+ of 94. He has been a slightly below-average quarterback over the course of his 11-year run. Having turned 34 in January, it's hard to believe he is suddenly going to get better over a multiyear run, especially given the lack of talent the Broncos have on offense.

It will now become more difficult for the Broncos to improve that talent. In addition to sending a midround pick to the Ravens for Flacco -- and Denver does have two fourth-round picks in this draft -- the Broncos are inheriting the three years and $63 million remaining on Flacco's onerous contract with the Ravens. That contract is unguaranteed, so the Broncos could get out of Flacco's contract after one season if things go wrong.

In 2019, though, the Broncos will add $18.5 million to their cap, which leaves them with $18.3 million in space per Spotrac. Denver can create $10.3 million in room by releasing the injured Sanders, but it probably needs to add at least one veteran wideout, if not a tight end to go with him. The Broncos need to find a way to bring back Paradis, their star center, given that they're already weak up front.

They're also stuck with a minimum of $10 million on their cap for Keenum, who has $7 million of his $18 million base salary guaranteed in addition to $3 million of his prorated signing bonus. Keenum will have no trade value at that $18 million figure and will likely be released by the Broncos unless he takes a huge pay cut, which wouldn't make sense.

Even more unfortunate: The combo of Flacco and Keenum creates total uncertainty at the position beyond 2019, thus making it a pretty good time to draft a quarterback, even if it's not in Round 1. As noted above, that has not gone well for Elway to this point.

Denver will have $28.5 million on its 2019 cap for Keenum and Flacco, with no quarterback of the future on the roster. It's hard to fathom how the Broncos got here, but it's an incredibly unenviable position.

The Ravens have to be thrilled to get a midround pick for Flacco, who was out of their plans and likely to be released unless Baltimore found a trade partner. The compensation suggests there were multiple teams in for him or that new general manager Eric DeCosta managed to persuade the Broncos to negotiate against themselves. The Ravens will eat $16 million in dead money on their 2019 cap and then be rid of one of the worst contracts in modern NFL history.

Baltimore needs to find a new backup for second-year quarterback Jackson, and it will presumably look for a player who more closely matches his skill set. The obvious fit is Tyrod Taylor, who came up in the Ravens system and had his best run as a pro under current Ravens offensive coordinator Greg Roman in Buffalo.