GLENDALE, Ariz. -- Two carries for 28 yards may not be anything to get too excited about. But a pair of 14-yard runs in Saturday's preseason game were a good sign that David Johnson is back.

That was exactly the message the Arizona Cardinals do-it-all running back wanted to send.

Johnson, who blew up for 2,118 total yards and 20 touchdowns in 2016 before a fractured left wrist ended his season in Week 1 last season, smiled wide as he recalled his first touches of the preseason and first game action in almost a year.

"The biggest thing is I was really pumped up about was how easy it was for me get through those holes. The guys up front blocked for me really well," Johnson said. "I think the team and the Cardinals fan base knows, but I think the biggest thing is letting everyone else to know that not just I'm back, but our offense is stacked." 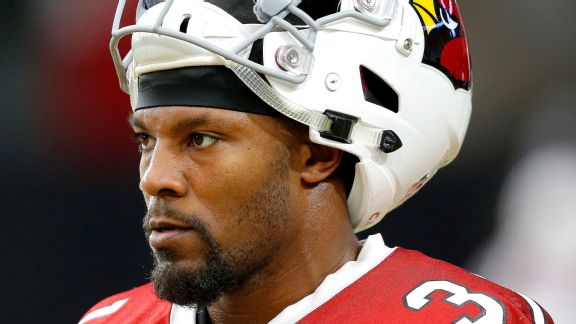 Cardinals running back David Johnson skipped minicamp in June, but he is in training camp and is not dwelling on his contract situation. Story

If the Cardinals' offense is to have success this season, it will start with the running game, and Johnson is motivated and primed to be the focus of that attack.

He's coming off an injury that cost him 15 games. He's playing for a contract extension with his rookie deal expiring at season's end. And this year, he's got a fullback in front him, potentially veteran Derrick Coleman, and what looks like a rising talent in rookie Chase Edmonds to spell him or offer a change of pace.

The thought of a strong running game makes Johnson beam, and the plan is to wear out opposing defenses with it.

"It doesn't have to be ground and pound, but if there's a guy in front of me and he's trying to tackle me, make him feel my power and make sure that he in the fourth quarter doesn't want to tackle anymore," Johnson said.

Johnson's wrist is fine, he said, and he felt more anxious to play Saturday than rusty from not having played in so long. With the physicality of daily practices, Johnson has already taken hits, and his wrist has held up thus far.

Johnson wants to return to being on the field on third down, and wants to play as much as possible even if it means being split out wide in offensive sets. But it was hard not to miss Edmonds on Saturday, who has looked good in training camp and scored a touchdown on fourth-and-goal from the 2-yard line.

"I jumped up and down like I scored the touchdown," Johnson said of watching Edmonds. "His second effort was amazing."

Johnson said early in camp that Edmonds, a fourth-round pick out of Fordham who ran for 5,862 yards and scored 67 touchdowns in college, might be smarter than Johnson was when he was a rookie. Coach Steve Wilks has praised the 5-foot-9, 205-pound Edmonds for his pass blocking and said after Saturday's game that he remains excited about the rookie.

"A lot of times people put an emphasis on the stature, but he's extremely powerful," Wilks said.

The Cardinals are well stocked at running back with Johnson, the emerging Edmonds, kick returner T.J. Logan and D.J. Foster, a receiving threat who appeared in seven games for Arizona last season.

"I think he might be one of our best route runners, regardless of position. He's just so smooth," Bradford said. "There's so many different things you can do with him."

Cardinals offensive linemen Justin Pugh and D.J. Humphries said they are only too happy to block for a healthy Johnson, or run block in general, and the coaches also understand they need to play to the team's strengths.

"It's critical as a coaching staff that we do what our players do best," offensive coordinator Mike McCoy said.