It's a new era in the AFC East. Tom Brady is no longer the quarterback of the New England Patriots and they are no longer division favorites. That means nobody can be counted out, even the rebuilding Miami Dolphins coming off their most important offseason in recent memory.

As the NFL ends its virtual offseason and teams break in preparation for an on-field training camp in late July, it's an ideal time to gauge what the Dolphins' realistic expectations should be in 2020 and when quarterback Tua Tagovailoa's squad will become legitimate playoff contenders.

"Games aren't won in March and April. I think there's a lot of work that has to be done from now until the start of the season," Dolphins coach Brian Flores said. "A lot of hard work has to be done first to become a good team. It's not easy, so I would say as far as expectations, let's manage them."

That's reasonable given the Dolphins are in Year 2 of their massive rebuild. The original expectation was there would be multiple seasons of pain before realizing the fruits of rebuilding the franchise. But with Brady gone and Tagovailoa holding the biggest quarterback star potential in the division, it's fair to ask if expectations have been altered. 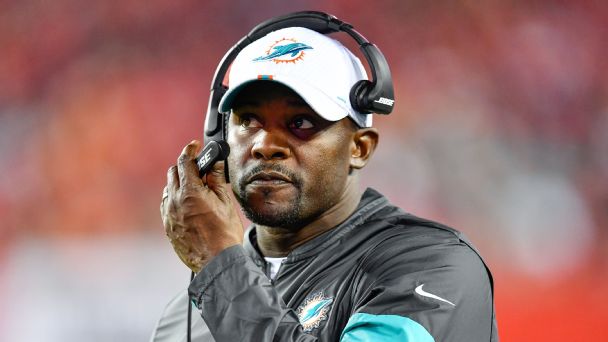 Is it realistic to expect the Dolphins to make the playoffs in 2020?

No team spent more guaranteed money in free agency and utilized more draft capital this offseason than the Dolphins. They doled out nearly $150 million in guaranteed money to free agents, led by cornerback Byron Jones and linebacker Kyle Van Noy, and selected six players in the top 70 of the 2020 draft including first-rounders Tagovailoa, offensive tackle Austin Jackson and cornerback Noah Igbinoghene.

There's no doubt the Dolphins have a significantly more talented roster than in 2019, when Flores led them to a 5-11 record.

It also helps that seven teams will make the playoffs starting in 2020, though Miami was tied for the 14th-best record in the AFC East in 2019, so that's still a big climb.

Miami should have one of the NFL's best cornerback trios with Xavien Howard, Jones and Igbinoghene, a solid running back duo in Jordan Howard and Matt Breida, a revamped front seven that should be better equipped for Flores' multiple defense, an overhauled offensive line with as many as four newcomers in position to take starting roles, and of course Tagovailoa to pair with highly respected veteran incumbent Ryan Fitzpatrick.

But ESPN's Football Power Index has the Dolphins ranked as the 27th best team with a 14% chance to make it to the playoffs and 6.2 projected wins. Our early May season prediction had the Dolphins finishing 7-9 facing the NFL's third-hardest schedule according to 2019 opponent record.

Despite the Dolphins' significant roster turnover, the analytics, Las Vegas odds and early-season predictions are against Miami being a 2020 playoff team.

But the Dolphins are ready to prove people wrong.

"It's always a process, but I think it's our time. Why not the Miami Dolphins? We kicked it off with a good draft. I think just taking that step and taking that process and coming in and hopefully being here for training camp, taking it day by day," Dolphins defensive tackle Davon Godchaux said.

"To me, on paper, the sky's the limit, but paper doesn't win games. You still have to go out there and work at it, so I'm excited to see it."

Dolphins safety Bobby McCain added: "I think we've made some good picks. I think we had some good picks in free agents as well. I'm not too big on looking at ESPN and what they are talking about in March, April and May. We're just going to take it one day at a time and try to get better as a team, and hopefully by the time January and February rolls around, they'll be able to put their foot in their mouth."

Miami's splashy offseason could expedite the timeline, but the analytics and oddsmakers have reasons for being cautious. A shortened offseason might impact the Dolphins more than most teams because there will be 34 new players on their 90-man roster, a new offensive and defensive coordinator and a rookie franchise quarterback who might not be the Week 1 starter.

The Bills are further along with a top-tier defense, third-year quarterback and a team that has made the playoffs in two of the past three seasons. And, the Patriots still need to be respected with coach Bill Belichick and a strong defense. New England has missed the playoffs once over the past 17 seasons.

Though a 2020 postseason appearance isn't out of the realm of possibility, 2021 is primed to be the season for Miami to become a playoff contender. A year to grow into a young offensive core led by Tagovailoa and a power offensive line seems necessary as Miami pushes toward long-term contention.

The Dolphins' rebuild appears to be headed in the right direction, and Flores could have the Dolphins playing games that matter deep into December. But there's no shame in suggesting a playoff bid in Year 3 of the rebuild (2021 season) is more realistic for Miami than in 2020.