The moves have been made. No amount of yelling, screaming, stomping of the feet, cheering or debate is going to change what the New York Giants have done so far this offseason. It happened.

Odell Beckham Jr. has been swapped out for Golden Tate. Landon Collins walked in free agency, thus allowing Jabrill Peppers and Antoine Bethea to take his place. Olivier Vernon is gone and Markus Golden will try to fill that void.

The Giants have made some moves since the start of the new league year, beginning with the Beckham blockbuster. Their team looks discernibly different, for better or worse.

Here's a look at what they have added so far as seen through the eyes of coaches, executives and scouts:

No player has more yards after the catch since 2014. That includes Beckham, who has played in 20 fewer games. That is the beauty of Tate. He has missed one game over the past eight seasons because of injury and has what one scout called "some understated p---k to him on the field." That's what makes Tate special. He doesn't have great size or speed but consistently makes plays after the catch. "Strong to the ball. Breaks tackles and creates after the catch in the short game," the scout added. "Turns into a running back with the ball in his hands." This should work well in coach Pat Shurmur's offense, which runs a lot of crossing routes and provides plenty of opportunity to make plays after the catch.

One problem could be that there is a little bit of redundancy with Tate playing alongside Sterling Shepard. "He's a solid slot," an executive said of Tate. Shepard (149) and Tate (144) are third and fourth in catches out of the slot since Shepard entered the league in 2016. Both can play outside but seem to be best out of the slot. Tate will turn 31 in August and is coming off a season in which his production dipped greatly. A third executive thought it was more scheme and role change going from Detroit to Philadelphia midseason than it was his age. The belief among all three executives is that Tate has some good years left in him.

The Giants view Peppers as the equivalent of a first-round pick. He was a first-round pick (No. 25 overall in 2017) but has since exhausted two years of cheap labor while his play was uneven with the Browns. Peppers played free safety most of his rookie season and struggled. He played better in Year 2 as a more natural strong safety. That would put him primarily in Collins' old role, even though Giants defensive coordinator James Bettcher prefers to use his safeties interchangeably. "I would call him a functional replacement for [Collins]," a scout said. "He's not as good a player as Collins. He might be a better athlete." 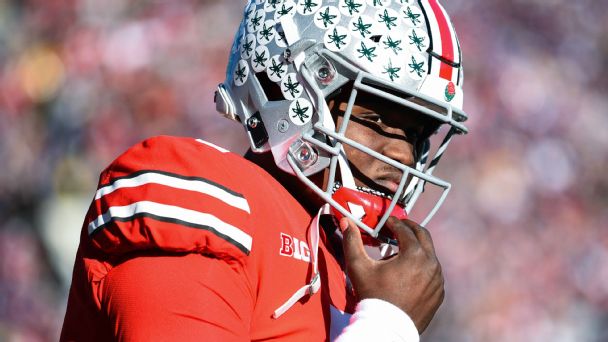 ESPN Giants reporter Jordan Raanan takes a closer look at Dwayne Haskins through the eyes of his quarterbacks coach and voices his concern regarding GM Dave Gettleman.
• Listen to Breaking Big Blue podcast

Part of Peppers' value is as a returner. But he averaged only 22.0 yards per kickoff and 7.3 yards per punt with the Browns. The Giants mandated Peppers be included in the trade. "We got two 1s and a [third-round pick]," Giants general manager Dave Gettleman said in a revealing quote that explained his thoughts on the return. The Giants researched Peppers in depth before the move and saw an ascending player with Pro Bowl potential. Gettleman views him as a "legitimate linchpin on the back end of your defense. The way this game is being played, your safeties are critical in pass defense." That's an optimistic outlook. "He seemed to be coming around" was the slightly more tamed assessment of a scout.

The Giants traded for Zeitler to be their starting right guard. He's a "solid starter," one coach said. Zeitler had a pass block win rate (PBWR) of 80 percent last season with the Browns, according to ESPN Stats & Information data. That's slightly above average across the league, but it's a massive upgrade for the Giants. Guards averaged a PBWR of 78 percent across the league in 2018 while the Giants' right guards came in significantly below. Jamon Brown was at 71 percent and free-agent flop Patrick Omameh was a putrid 61 percent. Zeitler does not come cheap, though -- his $10 million salary for 2019 ties him for fifth highest among guards.

Markus Golden, outside linebacker (one year, up to $4.75M)

Golden comes on a one-year prove-it deal. He tore up his knee in 2017 and managed 2.5 sacks in a different scheme and defense after Bettcher left the Arizona Cardinals to join the Giants. "Tape was average," one coach who watched him said. "Time will tell if he can still play at a high level." The thought is that Golden should be stronger physically in his second year back from a serious knee injury. He'll also be a better fit in Bettcher's 3-4 scheme. There is potential. "High-effort, good run-stopper-type guy," another coach said.

He will be the signal-caller of a defense that he is familiar with after spending 2017 with Bettcher in Arizona. The idea is that Bethea will get everyone in place and stabilize the back end. "He brings leadership," one coach said. He also can serve as Peppers' mentor before handing over the playcalling. Bethea, who'll be 35 in July, had the most productive season of his career in 2018, finishing with 121 tackles and three sacks. The five interceptions in his only season under Bettcher the previous year also were a career best. "Pro. Smart. One average-to-good year left in tank," another coach said.

He seemed to be an ascending player after recording 5.5 sacks in 2017 under Bettcher in Arizona. "Thought he was ready to take off," said one coach who has watched Pierre. Then injuries and a change of scheme contributed to a disappointing 2018 season with the Cardinals. Pierre is a slippery player out of Miami who was hidden on the active roster his first professional season. The New Jersey native has the size (293) and length (6-foot-5) that make him a fit as a 3-4 defensive end. He will serve as an interior rusher in Bettcher's defense.