COSTA MESA, Calif. -- Isaac Rochell was a typical college student at Notre Dame. With little money for food, the defensive co-captain for the Fighting Irish lived off cheap pizza.

"People would make jokes about players not having money to eat at night, well that junk is true," Rochell said. "I didn't have any bread in college. Little Caesars Pizza was $5, so I would get that instead of going and eating a healthier option."

Rochell played at a robust 290 pounds his final season at Notre Dame. However, in 2017 his mindset changed during the pre-draft process as he prepared for the NFL. Rochell began to pay attention to what he put into his body, and that change ultimately led to a plant-based diet that helped him lose 25 pounds over the past year.

"Caloriewise, there isn't huge fall-off," Rochell said about his new diet. "People think that if you're not eating meat, you lose a lot of calories. You can supplement those calories. I have been able to maintain [my calorie intake]. I definitely have had to eat a little bit more, but it hasn't been bad." 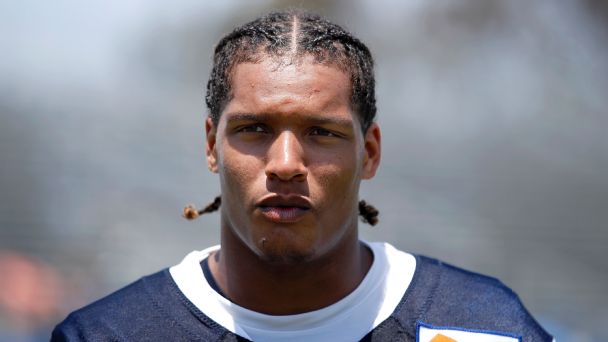 Lunch: Beans and rice or quinoa and rice, mixed vegetables.

Dinner: Beans and rice or quinoa and rice, mixed vegetables.

Entering his second season, a slimmer Rochell is raising eyebrows with his high motor as a pass-rusher. He was way out ahead in sprints with his defensive line position group during offseason work.

Selected in the seventh round of the 2017 draft by the Chargers, Rochell now weighs 265 pounds and estimates that his body fat is anywhere from 14 to 16 percent.

He's penciled in as the backup to Joey Bosa at defensive end, but likely will receive most of his playing time as an interior pass-rusher in obvious passing situations. Chargers head coach Anthony Lynn likes the 6-foot-5 Rochell's length inside.

"He's grown, man," Lynn said. "He's like a weed. He's stronger, faster. He just looks more mature on the field. I can't wait to see him in pads. I think he's going to have an impact on this team."

Rochell's transition started a year ago when his trainer during the pre-draft process suggested a ketogenic diet -- no carbs, no dairy and no sugar. He stuck with that his rookie season and saw good results.

However, at the start of offseason work this year, Rochell refined his eating in order to reduce inflammation in his body by switching to a mostly plant-based diet. Rochell said his go-to for meals is Chipotle.

"I still do fish and eggs, because if you go completely plant-based there's a natural B-12 deficiency," Rochell said. "So with eggs you've got a lot of B-12, and I love eggs. It's an easier breakfast option; it's just like your complete food.

"It's been good -- all of the classic 'I feel like I have more energy,' I think that stuff is true, so we'll see. I just feel better, and mentally you feel better because you know that you're being really intentional in what you're doing. And I think that just spills over into a lot of other things in life."

Rochell's good friend, fellow Notre Dame defensive co-captain James Onwualu, said that the rangy defensive end is considered a bit unorthodox by his teammates because of his eating habits.

"Most of the guys from Notre Dame are seen as a little quirky in the league, but that's OK," said Onwualu, smiling. "Isaac is very considerate of what he puts in his body, which rubs off on everybody around him. He definitely has his challenges since we're in the hotel, and he battles it sometimes just because he wants to make sure he's putting good things into his body. But he does a great job of it; he's healthy and moving great."

Fitness in the NFL

Training camp can be monotonous for players -- and fans. Here are a few stories about the lighter side of preseason.

Rochell spent most of last season on the practice squad, but was elevated to the active roster in Week 15, making an impact. Rochell played in 50 snaps the last three games of the season, recording his first career sack against the New York Jets in Week 16.

This season, Rochell will be counted on to help buoy one of the best pass-rush groups in the league, led by Bosa and Melvin Ingram. The Chargers finished tied for fifth in the league in sacks last season with 43.

Rochell will start in place of the injured Bosa in Saturday's preseason opener.

"It's an opportunity, but I don't want to overthink it," Rochell said about starting on Saturday. "It's just another day of work, really. So I'm excited for it. I feel confident, I've got to get my body right these next two days, but I feel good about it."

Along with the weight loss, Bosa said that Rochell refined his technique as a pass-rusher this year, including better hand placement and footwork.

"I've always liked Isaac," Bosa said. "I think he's a great guy and he has the potential to be a good rush end. The jump he made is kind of unexpected -- seeing him out here with his hands, the way he's moving, it's pretty unbelievable.

"He's doing a really great job. We have teams and we compete for points throughout practice, and I think he led his team. It was good to see."