ATLANTA -- Running back Todd Gurley II made three things clear in his final news conference of the season from the Los Angeles Rams' team headquarters.

“Y'all can call me hurt. Y'all can call me whatever, but we're going to the Super Bowl,” Gurley said, when asked how difficult it was to watch much of the Rams’ thrilling overtime win over the New Orleans Saints from the sideline. “What do y'all not understand? It's not about me. This sport has never been about me. It's never been about one player.”

Rams coach Sean McVay had his own statement after the 26-23 overtime win over the New Orleans Saints.

“Any time that you have a player like Todd Gurley on your team, I've got to do a better job of getting him involved and getting him into the flow of the game,” McVay said. “That's something that I have to be accountable for.”

As the Rams prepare to play the New England Patriots in Super Bowl LIII on Sunday, Gurley said that he feels good and that the left knee injury that kept him out in Weeks 16 and 17 is no longer an issue.

Gurley knows what it’s like to be at the bottom. That’s what has made it easier to take all of this -- including sharing time in the playoffs with veteran backup C.J. Anderson, who joined the team in mid-December -- in stride.

Gurley, the defending NFL Offensive Player of the Year, said that he wouldn’t care if Jake McQuaide, the Rams' long snapper, won Super Bowl MVP, and that he’d be fine if he didn’t play a snap on the biggest stage.

But to defeat five-time Super Bowl champion Tom Brady and the Patriots at Mercedes-Benz Stadium on Sunday, the Rams will need Gurley, who rushed for more than 100 yards in seven games this season, including the playoffs.

Gurley rushed for 1,251 yards in 14 regular-season games, sitting out the last two to rest his knee, and scored a league-best 21 touchdowns as the Rams finished the regular season 13-3 and clinched a second consecutive division title for the first time in 39 years.

When the Rams returned to L.A. after 21 seasons in St. Louis, Gurley was the organization’s most notable star. He arrived in Hollywood fresh off an NFL Offensive Rookie of the Year season after he rushed for 1,106 yards and 10 touchdowns.

But as the Rams stumbled to a 4-12 finish in 2016, Gurley struggled. Former coach Jeff Fisher's offense was sluggish, and Gurley was among the players who saw their numbers slide. After a late-season loss to the Atlanta Falcons, Gurley told reporters that the Rams looked like “a middle school offense,” and by the next morning Fisher had been fired. Gurley failed to rush for more than 100 yards in a single game that season.

When McVay arrived in L.A., Gurley became the focal point of his explosive scheme. As Jared Goff found his footing as a second-year quarterback, Gurley became the go-to playmaker and demonstrated his ability in the running game and as a pass-catcher.

“When you've got a player like Todd, you're not limited in any way that you can use him,” McVay said, “any time that you have somebody that's as versatile as he is that can really play all over the formation.”

Last season, Gurley rushed for 1,305 yards and 13 touchdowns. He also caught 64 passes, including six for touchdowns, as the Rams clinched their first division title in 13 seasons.

Perhaps it should have come as little surprise that, on the eve of training camp this season, the Rams announced that Gurley had signed a four-year, $60 million extension, with $45 million guaranteed, making him the highest-paid running back in NFL history.

Gurley started the season fast and appeared poised to repeat as the NFL’s Offensive Player of the Year, if not earning Most Valuable Player honors.

He rushed for more than 100 yards in two of the Rams’ first three games, then rushed for a career-best 208 yards against the Denver Broncos. He also was responsible for providing a late-game burst to secure a Week 13 victory over the Detroit Lions as the Rams clinched their second division title in two seasons.

But Gurley has not appeared the same since. He rushed for 28 yards in a loss to the Chicago Bears, followed by a 48-yard performance in a consecutive loss to the Philadelphia Eagles.

Against the Eagles, Gurley was sidelined for a series in the third quarter, and it was revealed after the game that he was dealing with inflammation and soreness in his left knee, which kept him out for the final two games of the regular season. 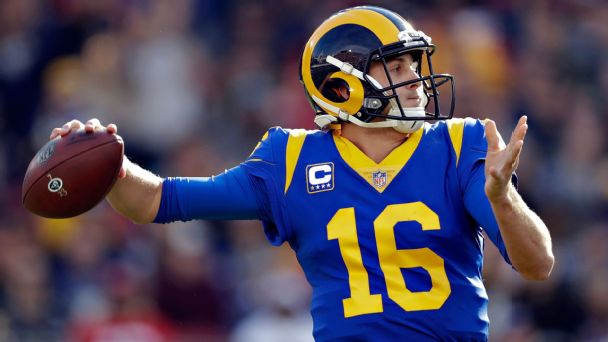 Enter Anderson. The Rams signed him after a series of injuries to their other running backs, including a clavicle injury that sent trusted backup Malcolm Brown to injured reserve and a shoulder injury that sidelined second-year pro Justin Davis.

Anderson, a sixth-year pro, became the surprise of the postseason. In the last year, he was cut by the Broncos, Carolina Panthers and Oakland Raiders. But then he rushed for a combined 299 yards in the Rams’ final two games of the regular season, against the Arizona Cardinals and San Francisco 49ers, as Gurley watched from the sideline.

Gurley returned in the divisional round of the playoffs, and it was anticipated that he would return to his role as feature back, with a trusted backup in Anderson to take some of the load. But that’s not how it played out. Against the Cowboys, Anderson had more carries, more yards and more touchdowns than Gurley, as they combined for 238 rushing yards and three touchdowns.

In the NFC Championship Game, Gurley spent the majority of the game on the sideline after he made two uncharacteristic mistakes early. A pass went through his hands and was intercepted. Later, he let a wide-open third-down pass in the red zone bounce off his hands and fall incomplete. As the Rams battled for the overtime victory, Gurley remained on the sideline. Speculation grew about his knee injury, as he finished with 10 rushing yards, including a 6-yard touchdown. But Gurley said after the game that he was fine, and that he was “sorry as hell today... I was so sorry.”

As the Rams wrapped up their final practices of the season in Thousand Oaks, California, teammates expressed confidence that Gurley would return to form in the Super Bowl, reinforcing that there were no signs of discontent from their star playmaker.

“He wants his team to have success,” wide receiver Robert Woods said. “And I feel like as a team we all want him to have success. ... He’s really just been a selfless teammate.”

Gurley appeared in good spirits after the final practice at the team facility, even as he left the locker room with his left knee heavily packed in ice. He again reiterated that his knee was “good.”

“If there was an issue on my knee, it would be on the injury report,” Gurley said. “Come on now. I'm at practice. I'm playing.”

After reiterating that it was his obligation to get Gurley going, McVay offered some foreshadowing.

“I've got a funny feeling he's going to be ready to go and play a big role in this game,” McVay said.

As for Gurley’s prediction for his performance in the final game of the season?